Orlando doesn’t suck, but the orange bikes do

A closer look at viral-marketing campaigns in Orlando 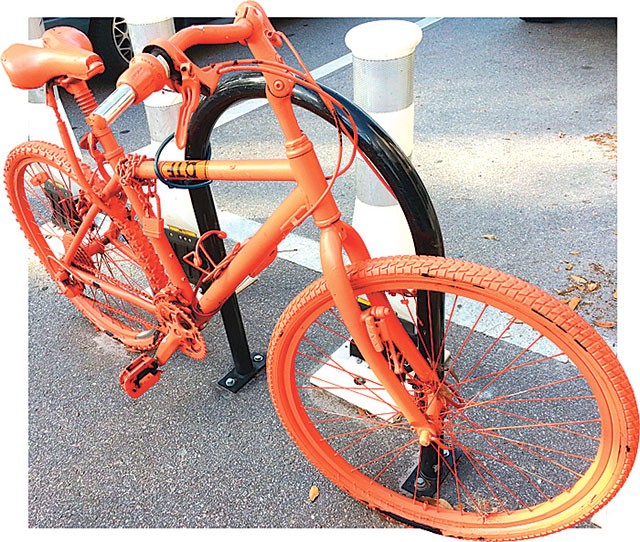 For example, in 2007, dozens of mounted, LED-lighted Aqua Teen Hunger Force characters appeared on bridges and storefronts in American cities. But Cartoon Network didn’t receive national attention for the stunt until Boston fire and police officials mistook the battery-powered signs for bombs.

Now Orlando is experiencing its own guerrilla-marketing renaissance, of sorts.

Let’s talk about those orange spray-painted bicycles you’ve seen locked to bike racks all over town. Are they the work of the infamously orange creative agency Say It Loud? Nope, says owner Julio Lima.

“Once people find out that they’re not mine, then they give me shit about it. It’s like Madonna says: Any publicity is good publicity. I’ll take it.”

Here’s a test of that maxim. Some residents, like Orlando artist and photographer, Jorgen Nicholas Trygved, really, really hate the orange bikes. He sees them as disrespectful knockoffs of the all-white “ghost bike” roadside memorials that honor slain cyclists.

“I get it, guerrilla marketing. I understand the purpose of it,” says Trygved. “I know it works because I looked them up to see who to hate. To see if anybody that I know or care about is doing this.”

It turns out Orangetheory Fitness is the one doing this. The national fitness chain has been using orange bike campaigns to promote location openings for nearly five years, according to their Central Florida regional director, Manny Ceara Jr.

“We never intended for our promotion to be tied in with the ghost bikes,” says Ceara, who spray-painted many of the bikes himself. “I’ve heard feedback from some people [who] consider that almost like an art statement because they think that we’re artists or something.”

Trygved isn’t having any of that.

“It’s a very lazy and uninspired way to get people’s attention. Why not actually do something that benefits Orlando citizens, instead of leaving your shit everywhere for us to look at on a daily basis?”

Still, we’re talking about them, so mission accomplished.

Another local campaign that caused a few cringes when it launched is called “Orlando Doesn’t Suck.” Started by the Orlandoan blog (theorlandoan.com), the slogan has its own hashtag and T-shirts.

The Orlandoan is run by an energetic couple, Alex Lenhoff and Andi Perez, and their site and social media celebrate the city’s best under-$20 meals and events. It’s a noble endeavor, and one that Lenhoff describes as “a labor of love,” but doesn’t “Orlando Doesn’t Suck” sound a little small-town and defensive?

Stephanie Darden, an UrbanThink! Foundation board member and the president of FDG Creative, doesn’t think so.

“I personally love it. It coaxes curiosity. It urges people to dig deeper,” says Darden. “If they already don’t know why Orlando doesn’t suck then they certainly now want to find out. I appreciate the fact that it’s not taking ourselves too seriously.”

“I can definitely see why some people could see it as a little bit offensive, but it’s meant to be tongue-in-cheek,” says Lenhoff. “Certain things about Orlando are a little cheesy or trashy, but that’s part of its charm.”

“I personally really like them,” says Lenhoff, “because I think of them more as public art.”

Orlando: where guerrilla marketing is becoming art. What could go wrong with that?