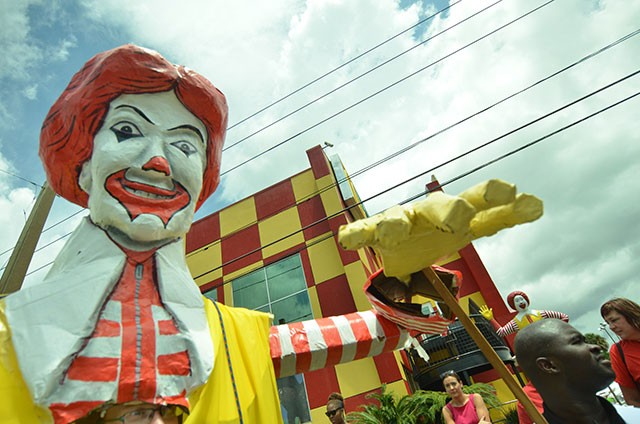 Average salary for a full-time fast-food worker in 2013

Average salary of a fast-food company CEO in 2013

There’s power in a union, part 1

Thursday, May 15, was, by all accounts, a pretty crappy day for an outdoor protest in Orlando. The dreary late-morning clouds turned into a full-on monsoon by early afternoon, but that didn’t stop approximately 100 sign-toting protesters from bringing their umbrellas and holding their ground outside of the world’s largest McDonald’s on I-Drive and Sand Lake Road. They gathered to take part in the national Fight for 15 labor strike, in which low-wage workers for fast-food chains, including McDonald’s, walked off the job to demand better pay – $15 an hour, to be exact – and the right to form a union without retaliation from employers.

On Facebook, blogs and social media, we’ve seen a lot of griping by people who want to know why anyone would think fast-food workers should make so much money – after all, it’s only flipping burgers, right? But here’s the thing, Fight for 15 organizers say: More than 50 percent of full-time fast-food workers are the main breadwinners for their families, and they aren’t able to make ends meet on the average $19,000 a year they’re currently earning. So they’re turning to public assistance to help them make ends meet. And that money comes from where? Tax dollars. So, in essence, we’re all subsidizing the bottom lines of the companies who want to make as much money as possible by paying as little as possible to their workers.

“We had one manager [at the protest] who worked for McDonald’s for nine years, and he never made more than $9 an hour,” says Stephanie Porta, executive director of Organize Now, which has been leading local efforts to organize Central Florida’s low-wage workforce. “The belief is that for people to be able to earn an honest wage and make a living, you have to earn at least $15 per hour. … We might not get $15, but we have got to fight for that, because that’s what people would need to make it to work and not have to rely on public assistance.”

Only about 10 of those assembled for last week’s Orlando protest were fast-food workers – Porta says employees representing several fast-food chains, not just McDonald’s, attended – and the rest were there to stand in solidarity with some the nation’s poorest laborers. Even state House Rep. Joe Saunders and U.S. Congressman Alan Grayson huddled under umbrellas to show their support.

You know who wasn’t all that supportive, though? The manager on duty at the I-Drive McDonald’s that day. Porta says that before the protests started, one of the managers came out of the building with two maintenance workers and “they started pulling up every sprinkler head, redirecting them so they sprayed at us on the sidewalk.”

McDonald’s corporate, which has expressed concern in corporate documents about the effect the recent focus on wages could have on the company, wasn’t even that harsh. The company’s statement about the Fight for 15 was just this side of supportive of the workers participating in the events taking place outside fast-food restaurants all around the nation. Their milquetoast response (see above) acknowledged the contributions employees make to McDonald’s restaurants every day and promised not to kick anyone to the curb who decided to participate. Of course, it’s easy for McDonald’s PR folks to make that statement. They aren’t the ones making the decisions about who gets to keep their jobs – that’s up to the franchise owners, not the corporate office. Anyone who’s ever worked at a McDonald’s knows that the motto of many franchise owners is “If there’s time to lean, there’s time to clean,” so we can only imagine how incensed they must have been when some of their employees took the time off to picket.

Porta says that Organize Now escorted the participants back to their jobs to make sure they were allowed back to work, but she says that when workers decide to stand up for themselves openly, the hammer doesn’t usually fall right away. “It usually happens weeks later,” she says.