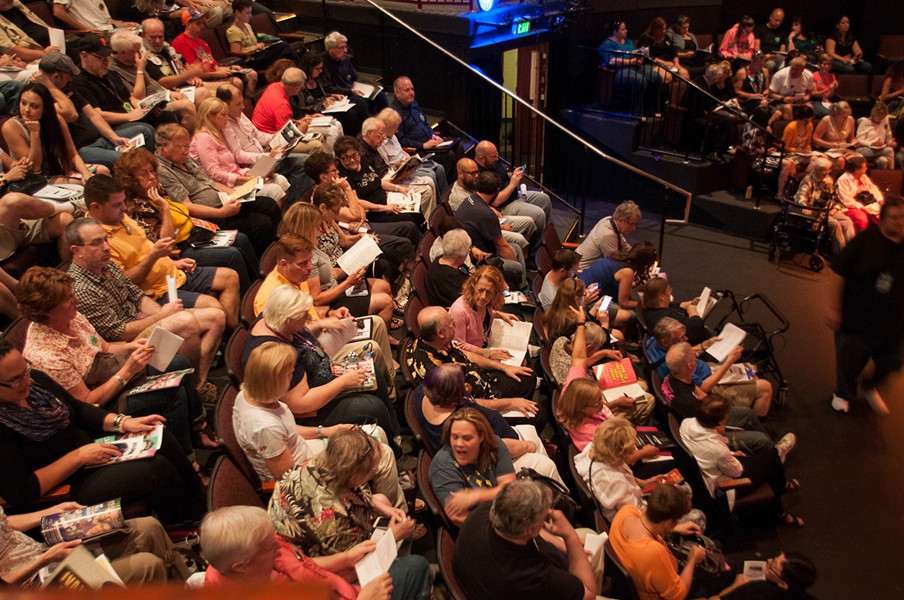 The COVID-19 quarantine has created a curious kind of time displacement, where weeks seem to blend together in a blur but individual days stand out in sharp relief. Decades from now, people will probably remember where they were on the day the NBA shut down and Disneyland closed, much like previous generations recall Pearl Harbor or JFK's assassination.

For those of us involved in Orlando's arts community, March 19 will forever be burned into our minds as the day we learned the 2020 Orlando International Fringe Theatre Festival had been canceled.

The anticipated annual event, which was scheduled to run from May 12 through 25, normally draws tens of thousands of participants from around the world.

Not only is the Fringe festival a keystone of Orlando's cultural community, it's a major commercial engine as well, generating more than $1.3 million for artists over the past three festivals and injecting millions more into local businesses. So there's only one word to describe what it felt like for executive director Alauna Friskics to make the call and cancel, only days after emailing supporters saying the show would go on: "devastating."

"Thousands of artists, audiences, volunteers, vendors, patrons, and the arts community at large depend on Fringe as the time of year we all come together," says Friskics, explaining the dilemma they faced.

"One thing is true: We will persevere," says Orlando Fringe Director Alauna Friskics. tweet this

"We knew it was the right thing to do in order to keep everyone safe, but actually making the decision was devastating. Orlando Fringe is one of the largest festivals in North America; we are first in the summer Fringe circuit, and we were the first to announce a cancellation. It shook the entire World Fringe community."

Fortunately, patrons have strongly supported the festival in its decision, according to marketing director Brian Sikorski: "The huge outpouring of love came seconds after the announcement. I had text messages, Facebook messages, Instagram posts, Twitter, phone calls, Facetime calls, people were spreading love and goodwill very quickly." Similarly, Fringe theater producer Lindsay Taylor, who is the liaison between festival staff and participating performers, says she "could tell they were disappointed but not surprised. It became clear very quickly what decisions we were going to have to make. That being said, I have been completely overwhelmed with how supportive our artists are. I think we have established a trust between our staff and the artists, so they know that we are making decisions in their best interest."

The good news is that although the Orlando Fringe is down, it's far from out, because Friskics has fought hard to retain the Festival's salaried staff (with the support of donors and some hard-won PPP loans) and ensure its survival into 2021. "Canceling the festival when we did allowed us to stop the immediate financial bleeding," she explains.

"We canceled before we spent most of the major festival expenses, and we are so fortunate and humbled that many of our sponsors and donors still paid their commitments to 2020."

Even if cancellation was the smart choice, it's still been emotionally challenging for Fringe employees. "It definitely feels like the rug has been pulled out from under me," says Taylor, who had just assumed her role as theater producer this year.

"I had a brand-new team working with me and we were excited to add more accessibility, introduce a new hub of venues, and we were full steam ahead when we had to cancel."

Unfortunately, the Orlando festival's cancellation has created reverberations that traveled across the global arts community, and could continue to echo for years. "The international Fringe touring circuit which starts in Orlando and moves across Canada each summer has been halted," says Friskics, highlighting Orlando's important role in the Fringe ecosystem. "So many touring artists depend on Fringe not only for financial income but to test new creative works and fine-tune their craft. They are now left with no audiences."

Two touring performers who have definitely experienced that impact are Erika Kate MacDonald and Paul Strickland, the Cincinnati-based couple behind the Critics Choice award-winning hits 13 Dead Dreams of Eugene and 90 Lies an Hour.

"Orlando Fringe was the first official cancellation of our whole summer tour, and when we got the news it was the moment that it all felt real for us for the first time," says MacDonald, who had planned to premiere Strickland's UnTrueBadour this week.

"It may take a while for people to feel comfortable [in a] mass gathering, but in time it will happen. And Fringe will be here to mend the community back together." tweet this

Like so many other arts organizations, Orlando Fringe is going live online in lieu of holding IRL events. So even though the Loch Haven lawn may be eerily empty right now, you can still gather virtually with fellow Fringe fans thanks to two slates of digital offerings. In recent weeks, Fringe has been hosting a "virtual lawn" at thelawn.orlandofringe.org, where artists have posted links to pre-recorded performances, live online events and artwork for sale.

And from May 12-24, "Fringe Today" will present a packed schedule of live programming at facebook.com/orlandofringefestival, ranging from musical acts and midnight talk shows to mixology lessons; you can even catch Orlando Sentinel critic Matt Palm and myself discussing our past reviews in a rare joint appearance on May 13. Many of these offerings are free; patrons are encouraged to tip performers, as well as purchase Fringe merchandise or donate online to support the Festival. [Click here for May 13-19 schedule.]

"My goal for 'Fringe Today' is to have our audiences get to see our artists in a different way – from watching tutorials of how they make their props to audience interaction experiences to learning how to do a magic trick," says Taylor, who curated the programming.

"I didn't simply want shows streaming for hours; I wanted our artists to get an opportunity to connect with our fans, so we can all learn more about each other, and get excited for when we return." Friskics echoes that sentiment, saying. "This is an opportunity for connection, to bring together artists and audiences. And that's what Fringe does best."

Going digital has pushed some artists to radically reconceptualize their shows. A.J. Pratts, whose sold-out PeeVira's SCAREavan SingAlongs squeezed Fringe patrons into a cargo van, is converting his campy karaoke kidnapping into Zoom meetings every Friday in May.

"Ever since I took my first Fringe bow in 2012, Orlando Fringe has been in my heart," says Pratts. "It has given me the gift of artistic freedom, self-identity and connection. It makes me feel like I'm part of something so much bigger than all of us. With them, I belong." Pratts decided to take his yearly Fringe show online "in hopes of keeping connection and laughter alive."

Just like the grown-up Festival, Kids Fringe has also gone digital, with live Kids Fringe Today events for the little ones every day at 3 p.m. They're followed each day at 4 p.m. with an hour of Teen Fringe programming designed for their older siblings.

"We decided to share Kids Fringe Today programming each day as an after-virtual-school treat for kids," says Fringe education coordinator Genevieve Bernard (who's also artistic director of Voci dance and, disclosure!, my wife). "We're lucky to have most of the local and touring Kids Fringe artists that were booked for the May festival able to join us online. We have performances, interactive adventures and workshops that the whole family can enjoy together."

Social distancing may be making this the strangest May in memory, but it won't silence the spirit of the Fringe. Instead, the Fringe faithful will honor the event from the safety of home – while looking forward to the inevitable avalanche of virus-inspired shows at next year's milestone 30th festival.

"My hope is artists can use this time to write and create, and that we will see an explosion of new ideas on the stage once we are on the other side of this," Friskics says. "One thing is true: We will persevere. It may take a while for people to feel comfortable mass gathering, but in time it will happen. And Fringe will be here to mend the community back together."

_
This story appears in the May 13, 2020, print edition of Orlando Weekly. Our small but mighty team is working tirelessly to bring you news on how coronavirus is affecting Central Florida. Please consider supporting this free publication with a one-time or monthly donation. Every little bit helps.