The Chicago multimedia artist is known for towering, transformative works. 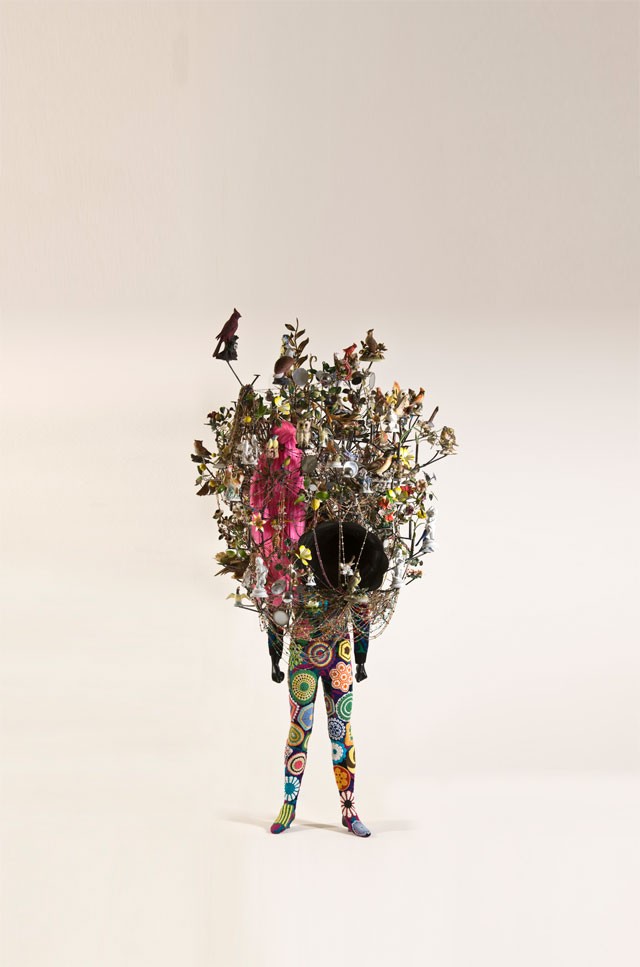 First things first: He's not that Nick Cave. Rather than a deathly-pale Australian singer, we're talking about (and to) Nick Cave, the Chicago artist known for his sui generis Soundsuits. These fantastical costumes, some of which tower 10 feet tall and/or nearly as wide around, are wildly bright, glittery, furry, exuberant; sometimes scary, sometimes childlike, humanoid yet alien.

Cave, who trained with the Alvin Ailey dance company and is now director of the graduate fashion design program at the School of the Art Institute of Chicago, draws no lines between disciplines. He is somewhat allergic to boundaries in general, whether of race or gender identity, forms of artistic practice, or high/low culture. Google "Nick Cave, artist" (so you don't get the musician), and you'll find dozens of videos of people dancing around in Soundsuits, their entire bodies covered and yet visibly exuding joy. It's a joy originally inspired by the unpleasantly glaring examples of how uneven justice can be. Cave's Soundsuits veil superficial differences and put us all on equal ground.

OMA's Acquisition Trust, the board of art collectors whose dues and research increase the museum's permanent collection each year, purchased Soundsuit, 2011 this year and celebrated its installation at a private party Oct. 17.

"We've been looking at Nick's work for about a year," says OMA curator Hansen Mulford. "Different things came up and were available, and this one popped up, and we thought it was just the right one for the museum and the collection."

Soundsuit, 2011 is a massive, complex, chandelier-like accretion of flea-market finds – a swirl of china birds, metal reflectors, flowers, fruits and strings of beads caging a hot-pink wig just visible within. Cave likened it to a "family tree" containing an animating spirit. (But is it imprisoned or protected by all that junk? Cave wouldn't say.) Soundsuit, 2011 will be on display until the museum's annual fundraising Festival of the Trees. Go take a look – this work gives any mere Christmas tree a run for its money.

Orlando Weekly: I read that you started making the Soundsuits as a reaction to the Rodney King beating during the 1992 Los Angeles riots.
Nick Cave: I was thinking about, looking at, trying to find that element – as a black man, what does it feel like to feel discarded, viewed as less than, dismissed, devalued? That's what inspires this work. I'm spending time at flea markets and secondhand stores. You know, my resources are things that are discarded.

OW: Wasn't the first Soundsuit built from twigs you found in the park?
NC: Yeah. Working with things that are sort of insignificant, and reintroducing them back into society's structure, and renegotiating how we respond and subconsciously think about our surroundings. There's this consciousness that happens when building the work – I think we start to look at things differently.
That, and also looking at ceremonial, ritual dress from around the world. I've spent time in Africa, also Trinidad, Carnival, investing in what fills this work. There's a particular form that fills my work. It has this kind of shape (making an arching gesture). … It comes from me looking at, and doing research on, sort of the Catholic uniform, the mitre …
OW: … the arching headdress …
NC: (nodding) Looking at the Klan uniform. Looking at the head of the missile, the shape of a condom. These are all things of power to me. Then bringing those all together to come up with this form. So when it is on the body, it has this sense of authority. So, how do we look at power through dress?

OW: And it's sort of an effort to blur age, gender, race?
NC: That comes through it being the Soundsuit – therefore it is sort of a second skin that covers the entire body. That being said, gender, race and class is irrelevant. What you're forced to look at is work without judgment. We tend to categorize everything, and here, I don't think you can. I think you're sort of confronted with this sort of otherness, this hybrid of sorts, and that's when this sort of dialogue or new way of thinking comes about.

OW: You said something earlier about quantifying, whether it's fashion or performance, and also the same thing with human beings, whether it's race, gender or whatever. I didn't know whether there was a correlation in trying to keep that sort of ambiguity.
NC: Yes, that's exactly what I want to do, just keep it in that space where the conversation remains open. We can talk about multiple things. It's not linear.
OW: Because quantifying things seems limiting.
NC: Very, very much so.