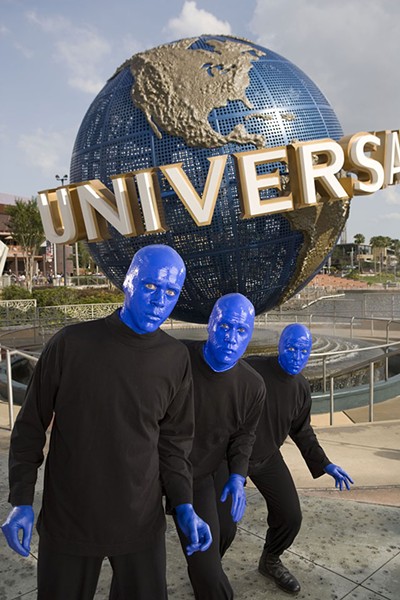 We can’t do a listing of attractions without listing the granddaddies of all attractions in our area: the theme parks. Though most of them are not located in Orlando proper – Disney is a good 40-minute drive from downtown – the parks are part of our lives, and to make the most of them, it pays to do some research before you visit. If you show up at the gate without an advance-purchase ticket or at least a plan for how to make the most of your money, you’ll probably pay more than you should have. Most of the parks offer deep discounts on multi-day tickets, and some offer special weekday discounts. Florida residents generally don’t save much on single-day adult tickets, but if you’re a diehard park-goer (or aspire to be, or have relatives who like to visit a lot), you can save some big bucks by purchasing an annual pass.

Walt Disney World
(including Magic Kingdom, Epcot, Disney’s Hollywood Studios, Disney’s Animal Kingdom, Disney’s Blizzard Beach and Disney’s Typhoon Lagoon)
The various parks are located along Buena Vista Drive and Epcot Center Drive in Lake Buena Vista, 407-939-7211, disneyworld.disney.go.com
Price of one-day ticket: $89 ($52 for Blizzard Beach or Typhoon Lagoon)
Florida resident price: $89 (annual pass $452.63)
Good to know: There’s a whole other world located underground at Walt Disney World. Cast members – aka, the people dressed as Disney characters – need to preserve the illusion, so naturally they need a place where they can, you know, check in for work, go to the bathroom, take off the giant Goofy head for a minute. Utilidors – corridors running throughout the park – give employees a way to get around without creeping out your kids.

Universal Studios and Islands of Adventure
6000 Universal Blvd., Orlando, 407-363-8000, universalorlando.com
Price of one-day ticket: $88
Florida resident price: $88 (prices are reduced on multi-day tickets; annual pass $164.99)
Good to know: Want to avoid lines at the entrance? There’s a second entrance to the park that’s generally not as busy as the main one. Enter the park through CityWalk, as usual, then head toward the Blue Man Group theater. You’ll see an entrance to the park along the pathway, underneath the giant rollercoaster.

SeaWorld Orlando
7007 SeaWorld Drive, Orlando, 407-363-2200, seaworldparks.com
Price of one-day ticket: $79
Florida resident price: $79 (for $89 you can buy a ticket that’ll get you a general admission pass for the year)
Good to know: Just like the other parks, SeaWorld’s bread and butter is the experience – spectacles and thrills and things to look at. But the park also exists to educate the public about aquatic animals. There are more than 100 employees at SeaWorld whose job it is to simply talk to people about the park and its animals. They’ll gladly answer your questions about anything and everything SeaWorld. Look for the park employees wearing nametags marked “Education.”

LegoLand
1 Legoland Way, Winter Haven, 877-350-5346, florida.legoland.com
Price of one-day ticket: $79
Florida resident price: $79 (annual pass $99)
Good to know: LegoLand Florida was built on the site of another once-popular Central Florida attraction called Cypress Gardens known for its waterskiing shows, gorgeous botanical gardens and women dressed in elaborate Southern belle costumes. The park’s popularity waned after Walt Disney World opened in 1971, and it changed owners a handful of times before it finally closed in 2009. If you wander LegoLand’s grounds, you’ll still see remnants of Cypress Gardens – the botanical gardens have been restored, and a massive Banyan tree, first planted as a seedling in 1939, still stands on the new theme park’s grounds.