Over the last 20 years, certified weirdos and creative pioneers Quintron and Miss Pussycat have toured the world with their subversive rock shows that incorporate musical inventions, maracas, and eccentric, hilarious puppet shows. The New Orleans-based couple, Robert Rolston (Quintron) and Panacea Theriac (Miss Pussycat), represent a sound and style in diametric opposition to the mainstream world of nightclub entertainment – they've both worked closely with museum organizations to showcase their artistry and are avid inventors. Through the debut of and tour for Quintron's latest album, Erotomania – performed on the remarkable and spellbinding Mellotron, and released this week by Mind Meld Records (run by Total Punk's Rich Evans) – the duo is undertaking a fall East Coast tour with a welcome return to the Sunshine State.

When Evans approached Quintron to release a record on the Mind Meld imprint, a place for artists to try things they've perhaps never committed to wax before, Quintron had the Mellotron in mind. "Rich has turned out to be like one of the best label people I've ever, ever worked with," says Quintron, praising Evans' hard work, honesty and personality. "He is intelligent; he's got a little genius gleam in his eye, and this is a match made in heaven." 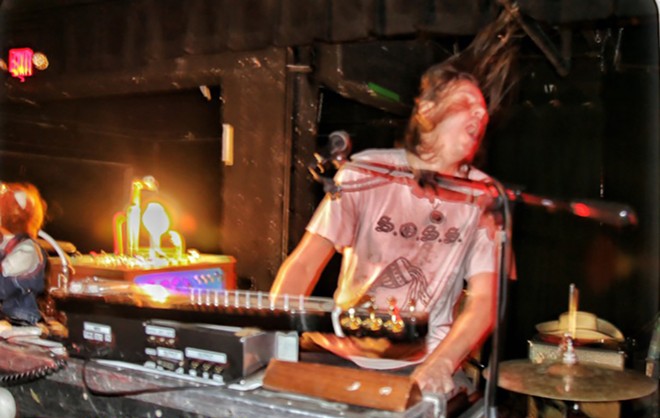 Quintron and Miss Pussycat's creative endeavors are driven by a love of performance and the stories we manifest, particularly through sympathetic magic, or the idea that the images we create in our minds can appear in our reality, "Sometimes I feel compelled to tell a story and you need conflict to tell a really fun story, but I always try to be careful and have a happy ending because sometimes the puppet shows come true, and so you've got to be very, very careful and have a responsibility," shares Miss Pussycat, revealing later that the tactile component of puppetry is what attracts her to the art form.

"The biggest influence on all of my music is the actual instruments and the amplifiers themselves and what they want to do and what they're best at doing in combination with my ability," explains Quintron, along similar lines.

Before a residency with the Robert Rauschenberg Foundation and a move to New Orleans' Ninth Ward, Quintron was a 16-year-old creating drum contraptions in his garage, and Miss Pussycat was developing a passion for storytelling through puppetry at the Christian Puppet Youth Ministry.

"I started doing puppetry as a kid. I was in the Southern Baptist Church in Antlers, Oklahoma, and I was part of the Christian Puppet Youth Ministry," explains Miss Pussycat. "It really incorporates everything that I've ever studied. I studied art in college, and I was like, 'Oh no, puppet shows are like the ultimate project.' They're three-dimensional collage. It's a sculpture that can talk. It's also kind of like channeling or speaking in tongues."

Erotomania, recorded on the enigmatic Mellotron – a keyboard instrument with the playback method of magnetic tape – is a groovy six-song instrumental album. It's a funky experiment in euphonious sound-making and idiosyncratic intrigue through the wonder of this instrument.

"Erotomania is satisfying my instrumental, mellow, psychedelic, exotica personality," Quintron says. He signals to the composition and arrangement of songs on an entirely instrumental album as his favorite part of making the record.

"It made me a better player to release a 100 percent instrumental organ record. I really, really had to bone up because your fingers are the ones doing the talking; there's no yelling involved."

The couple, with Quintron playing much of his organ set and Miss Pussycat showcasing a puppet show about ancient Egypt and Cleopatra, is on tour with seditious musician and performance artist Three Brained Robot. "I love him, he's great, he's so special. And so, every night I look forward to seeing him perform and see the crowd's reaction," beams Miss Pussycat. We recommend you do the same.

– This story appears in the Nov. 13, 2019, print issue of Orlando Weekly. Stay on top of Central Florida news and views with our weekly Headlines newsletter.