Oscar-snubbed 'Little Women' and 'Hustlers' are the same movie

I am going to drop a truth bomb, and you are probably not ready for it: Little Women and Hustlers are the same movie.

"Wait a minute," you're saying. "That crime-caper black comedy about Great Recession strippers who con their clients is the same movie as the sweet, earnest one about 19th-century sisters figuring out who gets to marry Timothée Chalamet?"

First of all, that's not what Little Women is about – and that anyone might think so is part of the problem here. Second, yes, these two movies are so much the same that it hurts me in all sorts of ways. Some good, some bad.

Sigmund Freud stroked his beard pensively when he wondered what women want, imagining that he was posing a conundrum for the ages. He had only to ask some women and really listen to what they said in response – but he doesn't seem to have ever considered that this was an option. If Freud didn't actually invent our culture's unwillingness to listen to and to understand women, he at least codified it.

We see that willful blindness at work on the big screen even today, where movies by and about women are infinitely less likely to get produced than movies by and about men. If such movies do manage to overcome the hurdle blocking their very existence, they are infinitely less likely to get wide releases. (I've studied this phenomenon on a week-by-week, here-are-the-new-releases basis. It's real, and it's infuriating.) 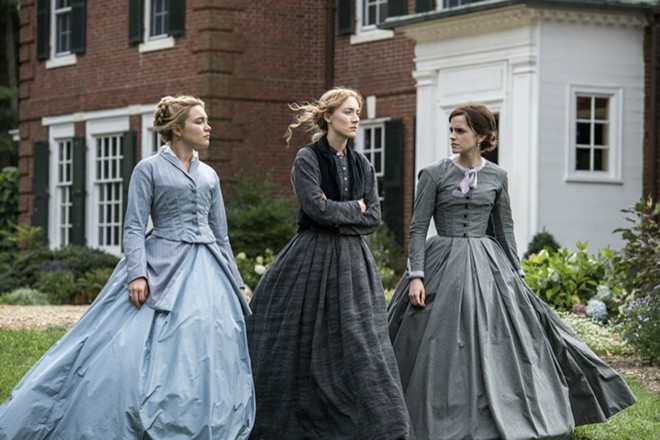 It is very much an anomaly, then, that both Hustlers and Little Women – both written and directed by women (Lorene Scafaria for Hustlers, Greta Gerwig for Women), both based on source material also written by women, and both profoundly about women – got such big releases within a few months of each other, and have been big hits.

It's no surprise that both films have resonated with audiences, because they plainly and overtly speak to women's lived lives that we hardly ever see play out in movies. Women like it when our realities are reflected in our entertainment. Men should like it, too, especially if they find themselves echoing Freud's needlessly clueless pondering. Of course, there are as many answers to Freud's "dilemma" as there are women in the world, but there are some basic ground truths – and these truths form the not-so-improbably similar backbones of Little Women and Hustlers:

• Women want to be respected for our brains and talents, not just for our bodies, and get far more satisfaction from the former.

• Women want financial independence, and particularly do not want to be financially reliant on men.

• Women want (and need, and cherish) the support of other women as we struggle to get by in a world that isn't kind to us.

• Women want autonomy in the world – not only to act with our own agency, but to be seen to be acting as our own agents.

It's pretty obvious stuff, or so you'd think. Yet our culture – in particular our pop culture – still too often casts women as nothing but adjuncts to men, unhappy unless romantically partnered with men. So it is beyond refreshing to see Little Women directly confronting the predicaments of the March sisters – most centrally, Saoirse Ronan's writer Jo and Florence Pugh's glamorpuss Amy – as they try to make their ways in a world in which marriage is, for genteelly poor girls such as them, primarily a financial arrangement, with few other options open to them to live comfortably, and as they blaze their own paths through such a world. It is beyond refreshing to see the sex workers of Hustlers – most centrally, Constance Wu's newbie Destiny and Jennifer Lopez's veteran Ramona – turning the tables on men who would take advantage of them, who so utterly fail to recognize the agency of those women that they cannot even see when they're being played.

And there's another thread of shared backbone that runs through both Hustlers and Little Women that is of particular appeal to women who long to see our stories told, who understand that women's perspectives on women's stories are absolutely vital: Women want control over our own stories, and we do not want to be told how to tell them.

It's nice that male filmmakers want to tell women's stories, but those men often have their own blind spots, failing to understand what it is about a woman's story that makes it worth telling. We see women controlling their own stories in Little Women, which plays a meta game with Jo's tale, suggesting that the happy ending (i.e., marriage) that her male publisher demands of the novel's female protagonist may not be the same happy ending (i.e., maybe not married?) of Jo's own life. We see Destiny controlling the telling of her own story in Hustlers, when she cuts off the interrogation of Julia Stiles' journalist; the dialogue soundtrack goes shockingly silent then. The journalist may be a woman, but she's much more privileged than Destiny is – and so, you know, women of color need to be telling their own stories, and getting heard, far more often than our culture allows.

Yes, Little Women and Hustlers are the same movie – and I predict we will get many more like them until all women are authentically heard far more often than we are now.

Hustlers and Little Women are not showing in any theaters in the area.