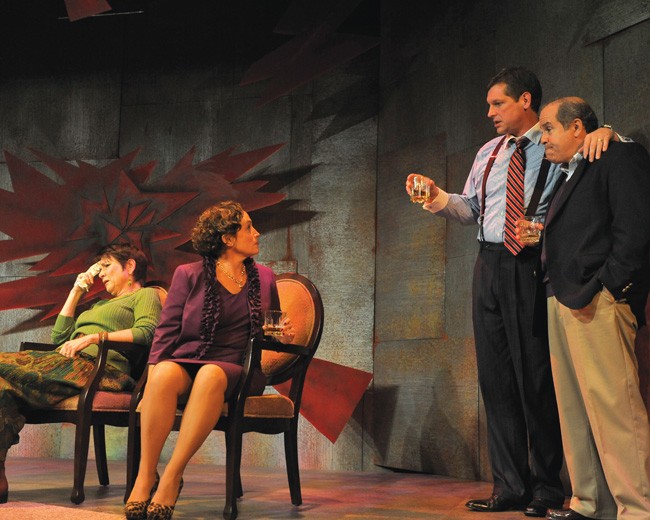 To paraphrase Flannery O’Connor, a good ensemble is hard to find. And yet, Yasmina Reza’s award-winning comedy of keeping up appearances, God of Carnage, manages a sweet balance of dramatis personae. That’s about all, though, as far as balance goes. The play, a fast-paced hour-and-a-half in Orlando Shakespeare Theater’s intimate Goldman Theater, takes place in the Cobble Hill neighborhood of Brooklyn, where two sets of parents discuss a schoolyard scuffle between their two sons.

Veronica Novak, a writer and art-history buff, is married to Michael, a disillusioned wholesaler with a working-class accent stuck somewhere between Jersey and Chicago. Their little boy has been hit in the face with a stick and has lost two teeth at the hand of the son of Alan Raleigh, a corporate shark, and wife Annette, his stiletto-clad “wealth manager.” It all seems settled, delicately enough, until Veronica gives the Raleighs a bit of unsolicited parenting advice.

Between attorney Alan’s cell phone obsession, Annette’s anxiety, Veronica’s pontifications and Michael’s failing attempts at appeasement, the verbal jockeying unleashes belly laughs. It’s voyeurism at its most fun and most tragic, Real Housewives-style, to witness the spectacle of two marriages failing and two pairs of parents trying to make sense of each other’s child-rearing decisions.

As relationships slowly crumble and the actors beat each other to a pulp, the set crumbles, too, transforming from modern society to completely trashed – just like the actors, once the alcohol appears; then it’s war. Arguments rise and fall in cadence. The dialogue is so fluid that it’s mesmerizing to watch the ebb and flow of alliances between the sexes and the spouses.

Michael, portrayed by Mark Ferrera, a self-proclaimed Neanderthal, busts out the booze and cigars, quickly making a temporary friend of Alan. Anne Hering, as Veronica, teeters between Emily Post etiquette and broken-down wifely exasperation. Her character’s desperate attempt always to do the right thing evolves into resignation; she tearily proclaims, “Courtesy is a waste of time; it weakens and undermines you.”

Of all of them, Alan (played by dashing Rus Blackwell) is the most transparent, never feigning an interest in matters of parenting but open in his preference for his gadget-driven lawyer’s life, preoccupied by a pending lawsuit for a huge pharma client. Suzanne O’Donnell’s Annette, clad in purple suit, diamonds and leopard heels, is the model of a Real Housewife, happy to spend her husband’s money while taking care of her “realm,” the home and the children.

It’s not a pretty sight to see what two seemingly normal couples come to once the gloves come off, but it sure is fun to watch, even when O’Donnell projectile-vomits all over Veronica’s prized out-of-print volumes (you’ve been warned). Each actor ably examines what happens when children are brought into the conversation and how easy it really is – but how shocking – to take off the filter and say what you really mean.

Under the ruined marriages and the ravaged living room beats the message: In the heart of us all lies the raucous, untamed savage, just waiting for the provocation of release. We squeeze ourselves into uncomfortable boxes: husbands and wives, mothers and fathers, white-collar and blue-collar, all striving to master the “art of coexistence,” as the sanctimonious Veronica says. Whether or not the ruse is worth perpetuating, the spoils of Alan’s proclaimed god of carnage are certainly worth seeing.