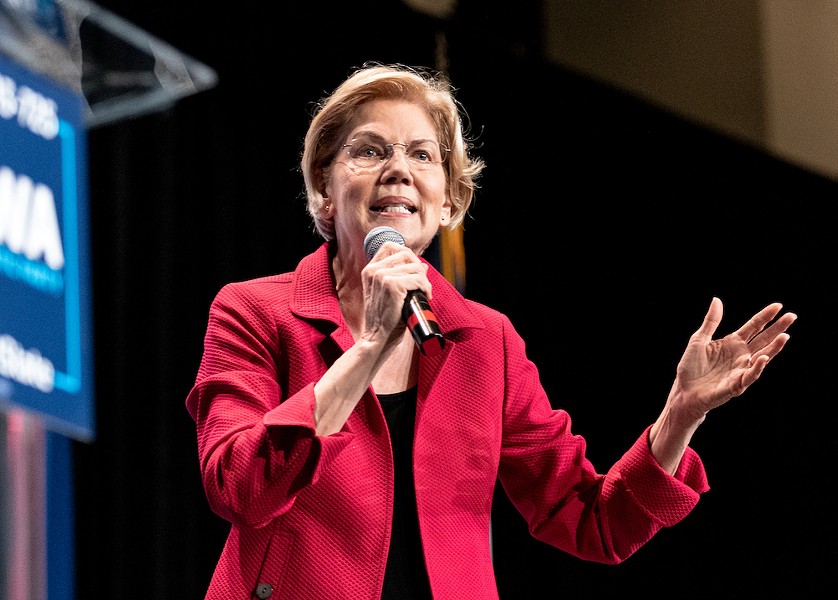 Several months ago, a very progressive, proudly feminist friend asked me who I was supporting in the Democratic race for president. I said I wasn’t sure, but I was leaning toward Elizabeth Warren. “She won’t win,” she replied. “So who are you voting for?” “Biden,” she said quickly. That took me aback. Of the major Democratic candidates, the moderate former vice president was the one probably least aligned with her values. “Why don’t you think Warren can win?” I asked. “This country won’t vote for a woman.” The only thing that mattered, she added, was defeating Donald Trump. She thought Joe Biden was the safest path toward that goal. Everything else was secondary. I have no idea if Bernie Sanders told Elizabeth Warren in late 2018 that a woman couldn’t beat Donald Trump in 2020. I’ll confess some skepticism that such a remark would have gone unleaked for a year only to surface weeks before the Iowa caucuses. But it’s possible that Sanders said it; CNN’s audio of their post-debate interaction last week suggests Warren believes he did. It’s also possible that Sanders said something that Warren interpreted in a way Sanders didn’t intend.

CNN airs the audio between Warren and Sanders after the debate:

W: "I think you called me a liar on national TV."

W: "I think you called me a liar on national TV."

S: "You know, let's not do it right now... pic.twitter.com/3ksXkALtZb

Either way, I’m less interested in The Feud than I am the question underlying it. For the sake of argument, assume Sanders said a woman can’t beat Trump. Is he wrong? I know more than one shellshocked progressive who has their doubts, and not without reason: In 2016, America had the choice between a smart, overqualified woman and a loutish, racist, aggressively ignorant man. The man won. There are caveats galore, of course. Trump’s election required a perfect confluence of events: Start with Hillary Clinton’s godawful campaign, led by an uncharismatic candidate tarnished by a quarter-century of ginned-up pseudo-scandals. Throw in the FBI’s mishandled email-server investigation that the media hyped like it was Iran Contra times Watergate to the power of Teapot Dome. Add some Russian hacking and Wikileaks dirty work. Mix in a late callback to Anthony Weiner’s dick pics. And for the coup de grace, the Electoral College, which gave Trump the White House despite earning 3 million fewer votes, thanks to a football-stadium-size margin spread across three states. In an election that close, everything mattered. So yes, maybe Bernie would have won because he’d have rallied the millennials who stayed at home. Maybe he would have won because the Rust Belt would have responded to his message. Or maybe he would have won because he is not a woman. This thesis can’t be tested, of course. Who knows where Bernie would have ended up after a billion dollars worth of “he honeymooned in the Soviet Union” ads? But Sanders, at least, wouldn’t have had to endure the torrent of misogyny, both from Trump and his supporters and from the media, that Clinton did. Three years later, “I’ll vote for a woman, just not that woman” has become a meme, but like any good meme, it gets at something real: Large swaths of the country despised Hillary, but they’ll probably find some reason to despise the next woman who makes a serious run for commander in chief, too. Consider the Democratic primary: Among the reasons Kamala Harris never caught on was that Democrats voters feared a black woman wouldn’t be electable. Amy Klobuchar, who seemed primed to make a Rust Belt case, was met at the gate with stories painting her as, well, a bitch. And Warren has been labeled “angry” and “antagonistic,” another way of calling her “unlikeable.”
Large swaths of the country despised Hillary, but they’ll probably find some reason to despise the next woman who makes a serious run for commander in chief, too. tweet this
To become the first black president, Barack Obama had to not only be an exceptional politician, but he also needed the stars to align. With the economy tanking and the Iraq War a dumpster fire in 2008, whichever Democrat won the nomination would almost certainly win in November. And Obama had given a speech opposing the Iraq War in 2002—before his opposition carried any consequence—while Clinton backed it. He was lucky and good. To become the first woman president, Warren (or Klobuchar) will need to defeat an incumbent presiding over a growing economy. To break through the barrier in the worst rich country in the world to be a woman, she’ll have parry misogynistic depravity that knows no bottom and a media that still treats Trump as normal. She’ll have to persuade a country conditioned to accept a man’s flaws (Trump won just six weeks after the “grab ’em by the pussy” tape came to light) and doubt a woman’s ability and wherewithal (remember that time Hillary coughed?). She’ll also have to deal with the fact that female ambition tends to make men uncomfortable. In short, she’ll have to be exceptional. And like Obama, she’ll need some stars to align. Despite the economy, Trump is unpopular, widely perceived as crass, venal, mendacious, impulsive, corrupt, and cruel. A good candidate, man or woman, will make the election a referendum on the president while also motivating the party’s base to turn out. It’s a fine line to walk, but if it happens, Trump will lose. There’s no reason that candidate can’t be a woman. But like Ginger Rogers, she’ll have to do it backward and in high heels. Stay on top of Orlando news and views. Sign up for our weekly Headlines newsletter.