Our music columnist discusses Alkaline Trio, TTNG and the Orlando debuts of Clamfight and And So I Watch You From Afar 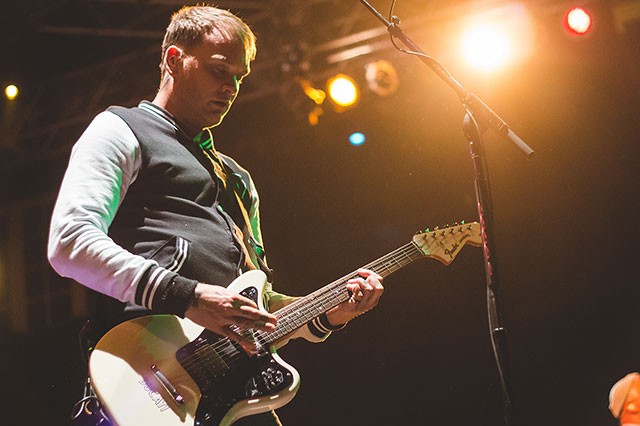 Loaded with two double-headlining bills, it was a strong week for national touring bands. But the two that made their Orlando debuts are ones we especially want coming back.

I Versus the Glacier, the latest album from New Jersey’s Clamfight, was one of those records that leapt from the pack and clutched me by the neck this year. Due to workload and life, however, I didn’t get around to writing about it. So I filed ’em, but affixed with a star. Because of that purposeful little star, however, the news that like-minded Jax-lando band Hollow Leg and Orlandooom Promotions were bringing them here for the first time hit like a thunderclap (Nov. 8, Uncle Lou’s). It’s good to live in a scene where people do good, forward-looking work.

Neither their appearance nor their absurd name look the part, but Clamfight’s raging, mammoth hammer of metal, hardcore and hard rock is the real damn deal. And it ignited the packed house into a wildfire of banging heads and flying bodies. This one, kids, was a certified rager.

Clamfight’s from pretty far away and haven’t been working this city. But from what I gather, they’ve got some family, some well-connected friends and now some serious converts here. According to my math, that equals zero excuse to not play Orlando on the reg.

Sargent House is one of those labels that’s known but perhaps not duly appreciated. But a label with Deafheaven, Russian Circles, Boris, Le Butcherettes, Marriages, Helms Alee and Indian Handcrafts (whose 2012 album Civil Disobedience for Losers made my official year’s best list) in its stable is to be taken very seriously. And the Sargent House Tour, which recently made a stop here (Nov. 3, the Social), was co-headlined by two of its notable overseas bands and showed that total guitar heroism doesn’t necessarily have to come with the rock baggage of ridiculous dick-swinging.

On their second Orlando appearance already this year, England’s TTNG impressed once again. Like the Appleseed Cast, they play a shining brand of math-pop that beats with the heart of good emo (yes, such a thing exists and may or may not account for why they made the sensitive-guy move away from their original, more evocative moniker of This Town Needs Guns). And though they showcased some dazzling guitar complexity and flashy finger work that would make even Minus the Bear genuflect, it’s all in the service of lovely, finespun pop songs, not self-serving wankery.

But in their first-ever Orlando appearance, Northern Ireland’s And So I Watch You From Afar turned up the wattage from a twinkle to a nova. Their opening song basically had only one line repeated over and over: “The sun is in our eyes.” But that little sentence there nutshells the experiential sensation of their blinding music and spirit. Like an even more revved Tera Melos or a sunny, not-irritating Hella (also Sargent House bands), their post-rock spazz is restless and explosive but joyously listenable. Constantly peaking with extraordinary ability and range, the triumphant sound of And So I – ah, fuck it – ASIWYFA is math-rock elevated to unchained rock bliss.

Another co-headlining bill last week (Nov. 4, House of Blues) featured Florida’s own New Found Glory, about whom I couldn’t possibly muster less care. Chicago’s Alkaline Trio, however, is a very different matter, and that pairing has got to be a crime somewhere. But my interest in them is recent. Because pop punk is a genre flooded with an unending number of interchangeably forgettable acts, this is a band I’ve mostly ignored by association. But their new record (My Shame is True) is as sturdy as a battleship and, frankly, arrested me with its sheer quality. So I’m not going to introduce any new revelation into such an already noted band, but I will point to the triumph of a great record. In the face of something that eternal, all else – fashion, politics, antics, whatever the hell – evaporates as it should. And somewhere along the way, Alkaline Trio has managed to distinguish themselves so far above the bland and crowded fray as to become not just a standout in pop punk but a good classic American rock band.

Check out photos from Alkaline Trio, New Found Glory and H2O at House of Blues