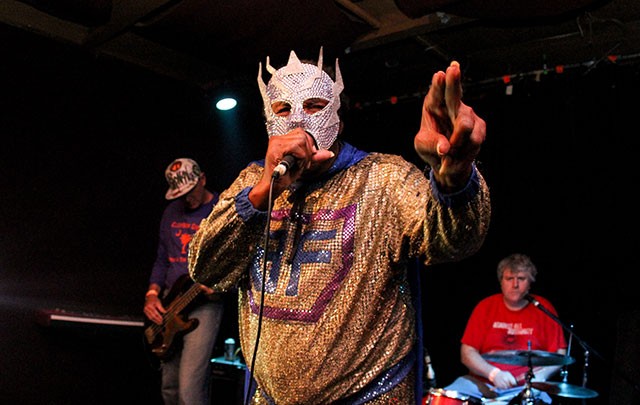 The 13 has shut down due to – wait for it – cop problems. So a DIY punk-and-metal venue located in the gauntlet run of patrol-nuts in Edgewood didn’t last. I’ll take that blank, silent look on your face to mean that you’re as unsurprised as I am. Still, it’s a serious bummer for a place that was trying some cool things. Venue rep Felipe Riesco tells me they’re looking for a new location to continue the DIY purity, with the possibility of a beer and wine license to anchor and sustain the venue. There’s no timetable yet, so effectively it’s just hope at this point. But my fingers are crossed. Stay tuned.

The freaks come out at night during Halloween week. But sometimes, if you’re lucky, they’re up on stage. Enter costumed underground hero Blowfly (Oct. 27, Will’s Pub). The original – and I contend, far superior – old dirty bastard is a mash-up of pro wrestling, pulp comics and porn. The, ahem, sexagenarian is essentially James Brown with the bedside manner of 2 Live Crew – to hell with good taste and age appropriateness. Not since the old Will’s Pub has the king perv deliciously disgraced Orlando. It takes a special kind of dedication to be this retarded for over 40 years and counting, and it’s good to see the codger hasn’t cleaned up his act one bit.

But the interesting local spark that the show ignited are talks of a collaboration between Blowfly and accomplished Orlando DJ-producer Sleazy McQueen, who spun the event with DJ BMF. Sleazy, who’s been pretty busy lately with some very high-profile work on official remixes for Bryan Ferry (“Don’t Stop the Dance”), could finally live up to his name for real with a Blowfly joint in his portfolio. It’s not a done deal yet, but the negotiation is real. I’ll keep ya informed.

Check out photos from Blowfly's show.

Speaking of local connections, post-hardcore god J. Robbins (Nov. 1, Will’s Pub) – who produced and even played on the Pauses’ album – is one of the luminaries in the Orlando band’s ever-deepening orbit. But before we get too “post,” let’s start with the straight-on hardcore of coed feminist opener War on Women from Baltimore. For a night where the culmination was a primarily acoustic performance, the Dischord Records act kicked things open on a jarringly intense note with rock that was intelligently structured and intelligibly melodic but wall-crashingly visceral.

Afterwards, the Pauses deepened the mood as they do, only more so with the added cello accompaniment of Robbins bandmate Gordon Withers.

By the time Robbins stepped up with only modest accompaniment on keys and cello, vibe and respect ruled the house. Although the interpretation was particularly mellow and mature, stripping back the layers nicely affirms the core quality of his songs. And it was one of those special engagements that was treated as such by both audience and performer.

Indie darling Kurt Vile & the Violators really brought ’em out (Nov. 2, the Social). I’m a much bigger fan of his former band the War on Drugs and, at the risk of sounding like a completely uncool outsider, his solo genius isn’t as clear to me as it is to everybody else. But something, it, happened in concert. Live, the richness of his music leapt to full life. Instead of getting lost in a long ether of subtlety, his interestingly off-kilter merge of rootsy fuzz and slacker laze revealed its full depth and grip. Less can be more, but only if you have some character. And Vile’s music and guitar-playing pack great taste, tone and spacing.

Right before the Kurt Vile show, I thought I’d feed my curiosity and check in on the opening set by INVSN right next door (the Beacham) since they came up in conversation with a friend just last week. Although led by Dennis Lyxzén of (International) Noise Conspiracy and Refused, the only thing this Swedish band shared with those is a socialist revolutionary spirit. Besides that, these guys rock out like it’s 1986 with a dramatic alternative sound that drapes tall, dark and dour rock in shadowy pop majesty. And, damn, do they do it convincingly, channeling much of what was good about that period, only with more noise and chaos.