Our music columnist watches, calls for the resurrection of jazz icon Sam Rivers 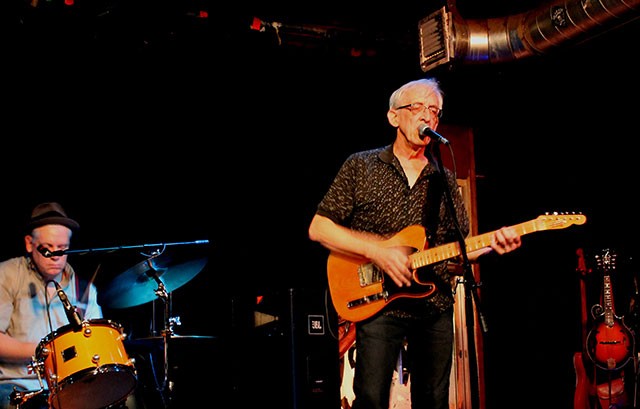 Lou Reed was the direct inspiration for a disproportionately large number of my favorite bands. So thanks, Lou. See you on the wild side.

Jazz giant Sam Rivers is one of the brightest musical stars to ever call Orlando home. That also made him one of the biggest losses in Orlando music history when he passed in 2011. Since then, his beloved orchestra hasn’t really performed his music publicly. So the fresh emergence of the New Sam Rivers Rivbea Orchestra (Oct. 23, Will’s Pub) was, without question, the most significant local event in music last week.

Helmed by orchestra leader Doug Mathews, the big band delivered a loving, impassioned reunion performance. Of course, without the original maestro, there was a glaring, unfillable hole. But one way to overcome the absence of a cornerstone is by grand committee, and this impressive 16-player band brought the groove, fire and climax of Rivers’ music to life. Moreover, Rivers collaborators Mathews and Bobby Koelble, who stepped into dauntingly big shoes to render Rivers’ parts on guitar, both did honorable duty in his stead. And, though the man himself was absent in body, his spirit was in the house and vibing with life.

Throughout the evening, the congregation swelled to a healthy, buzzing size, cutting across generations and brimming with appreciation and fellowship. Radiant with the energy of presence and engagement, it was a night that was more than just live – it was alive. There’s no greater way to honor anyone’s memory than that.

We should all hope that this becomes a regular series again, as Mathews implied it might in Jim Abbott’s recent story. It would be a godsend to have the legend of Rivers’ music once again be a live local thing. It was a tradition from the original Will’s Pub, so perhaps it can become a part of the city’s music pulse again at the current one. Toward that possibility, there is a second date already booked there for Nov. 20. So block off your calendar now and show your demand in presence.

Local country-rock band Six Time Losers showed a new face in their recent performance supporting Bill Kirchen (Oct. 21, Will’s Pub). Although they’re still clearly working through some personnel changes, the brand-new addition of Doc Hibbard is promising. He’s a lead multi-instrumentalist, but the most impacting aspect he adds to the group’s equation is pedal steel. The band tells me they had that early on, but I don’t recall seeing it since I’ve been tracking them. Regardless, it kicks them up a couple degrees and into a whole new level of realization. This is a band with some solid core songwriting virtues but has always had some trouble fine-tuning their sound enough to really be taken seriously. With all the possibilities of this new piece, however, they could finally break out of the middle of the pack and be more relevant than they ever were before – if they shake out all the bugs and really ride Hibbard’s skill for all its mileage.

There is no dispute over the prestige of Bill Kirchen. From his early days with Commander Cody & His Lost Planet Airmen and throughout his extensive career since, the decorated guitarist has earned respect in country, rock and Western swing circles. But for all the hot licks and original badass spirit Kirchen taps from honky tonk and rock & roll, his terminally square music just feels like old white-guy stuff. So the concert was kind of charming, but I’m pretty sure quaint ain’t what he and his band were going for. There is, however, always something about seeing a player with real seasoning in person, and this show was definitely that. And differences in taste notwithstanding, the man is a six-string master.

A little less intimate, a lot less dad-ish and much more my speed was alternative traditionalist Wayne “The Train” Hancock (Oct. 25, the Beacham). Unfortunately, his trio adhered more to his rockabilly side this time than his hard-Hankin’ honky-tonk side, no doubt catering to the crowd gathered for headlining act the Reverend Horton Heat. But it was a solid, straightforward performance that proved that good old-fashioned American roots music should always be done with some balls.