Brunch is more than just a late breakfast. It can be a romantic epilogue, an after-after-after-party, a hangover cure, a culinary adventure or a situation report. It’s the buttery glue that holds our social webs in place, a chance to see friends and family in the daylight for once. It’s what we mean when we say “Sunday Funday,” but it doesn’t necessarily have to happen on a Sunday.

In this issue, we’re giving you the skinny on some of our favorite brunches. Some are well-known. Some are hidden gems we hope you don’t tell too many people about. From buffets to dim sum, fancy brunch to brunch-on-wheels, we have suggestions to break you out of your brunch rut. Did you know there are brunch cocktails that aren’t mimosas or Bloody Marys? There are. And we’ll tell you where to get them.

Of course, we’re not just telling you all of this information out of the goodness of our hearts. No, we’re trying to whet your appetite for all things brunch so that you’ll join us this Saturday for United We Brunch, our Brunchenstein creation that unites some of the area’s best brunch bites with an open bar, live entertainment and the beautiful surroundings of the Orchid Garden. It’s going to be a great time, but it’ll be even better if you show up ready to heckin’ brunch your face off. Get hungry!

Bloody Marys and mimosas are the classics, of course, and we've covered the best build-your-own bloody bars and bottomless mimosas many times before. But what if you want something different? Or – hear us out here – what if you aren't drinking? We gotchu covered on all those counts.

If you're looking for a cocktail, 1921 Mount Dora has a crackerjack selection, including a house-made Paloma and a hibiscus tea-infused G&T. If you still want that festive communal vibe (because brunch is all about the crowd), the Ravenous Pig serves a special Brunch Punch but order early; when it's gone for the day, that's it.

And what about coffee? It can be an afterthought at brunch, but those who appreciate good coffee usually choke on the average restaurant's Bunn machine-stewed cup. Exception to the rule is the Glass Knife, where coffee is taken VERY seriously, to the point of having an exclusive Colombian lactic-processed roast and sometimes even a Geisha bean. (If that sentence meant anything to you, you should be brunching here.) 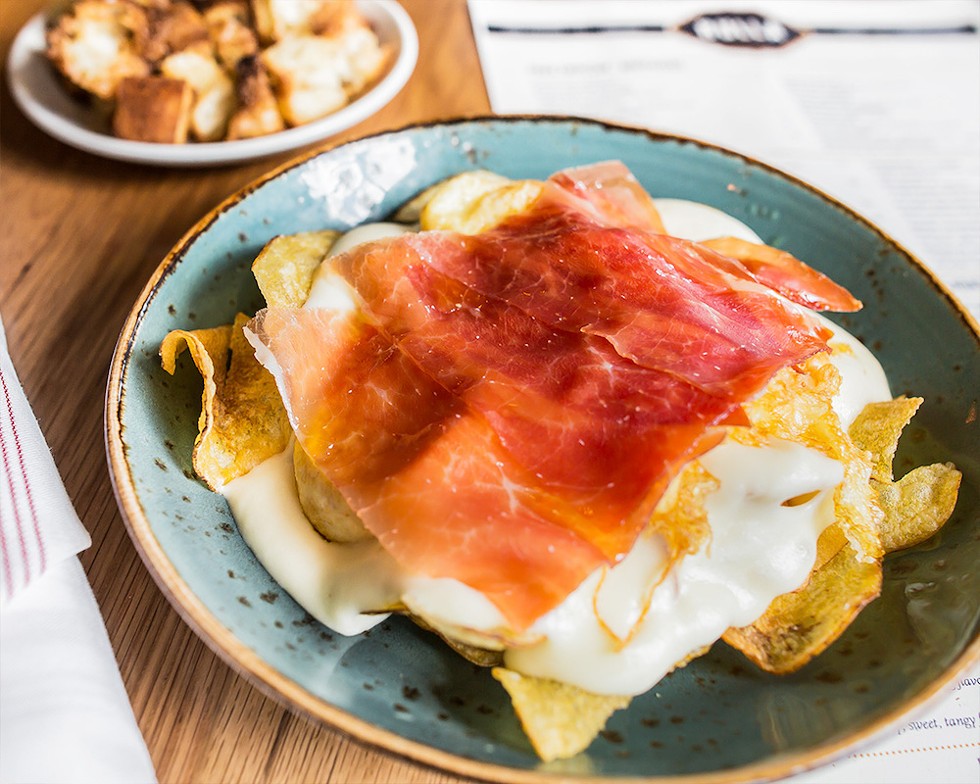 It's no wonder that the patio of 310 Lakeside on Central Avenue, across from Lake Eola, is one of the city's most sought-after wedding venues. It's gorgeous and airy, with lots of natural light for excellent Instagramming, with tables under swaying live oaks, perfectly situated for farmers marketing or a stroll around the lake right after sipping the last swig of your Bellini. The pear-and-brie omelet is extremely popular, as is the crispy-crunchy French toast and the tenderloin Benedict, topped with rare slices of filet mignon.

SEE ALSO: the leafy neighborhood vibe of Maxine's on Shine, beachy shenanigans at the Waterfront

Nothing against pancakes, French toast or eggs Benedict, but frequent brunchers need to mix it up occasionally. That's where Bulla comes in with their namesake egg dish. Huevos Bulla sounds weird on paper – eggs mixed with potato chips, draped with paper-thin slices of Serrano ham and dolloped with potato foam and truffle oil – and looks weird on the plate. Sort of a Spanish take on chilaquiles, perhaps? But it's hearty and delicate at the same time, and you just have to try it to appreciate it.

Google calls it "Restaurant Jalisco," but Yelp calls it "Tienda Mexicana Jalisco" – either way, it's where you want to go for the kind of Mexican desayuno found regularly from SoCal street vendors. There's scrambled eggs with crumbly, spicy chorizo folded in, chilaquiles divorciados covered with both red and green salsa and topped with fried eggs, and huevos rancheros, of course. Occasionally they'll have pastries, too, like the pale pink conchita, pillowy inside with a crust of sugar fluted like a seashell on top.

It might be the closest thing you'll find in Orlando to the classic Greek diners in New York and Chicago – family-owned, vinyl booths, massive plastic menus and all. College Park's Christo's has been soothing hangovers since 1970, though a spiffy renovation a few years back swept away the old-timey scuffs and chips; you're going to want to at least try to sit up straight. There's a plethora of straight-ahead choices, but omelets are the move at Christo's. The Greek omelet with gyro slices, feta, tomato and onion is one of our favorite nap-makers.

For those who just can't seem to make the dim sum window, Peter's Kitchen is offering dim sum deliverance. Not only do they offer the small plates from traditional carts on weekend mornings, perfect with a Tsingtao hair-of-the-dog first thing, but the dim sum menu is available at all hours, even for take-out and on UberEats, just in case you can't peel yourself out of bed. Newcomers don't have to practice the old point-and-pray tactic – Peter's Kitchen can provide a card with photos of each dish on request so you can eat with your eyes first. 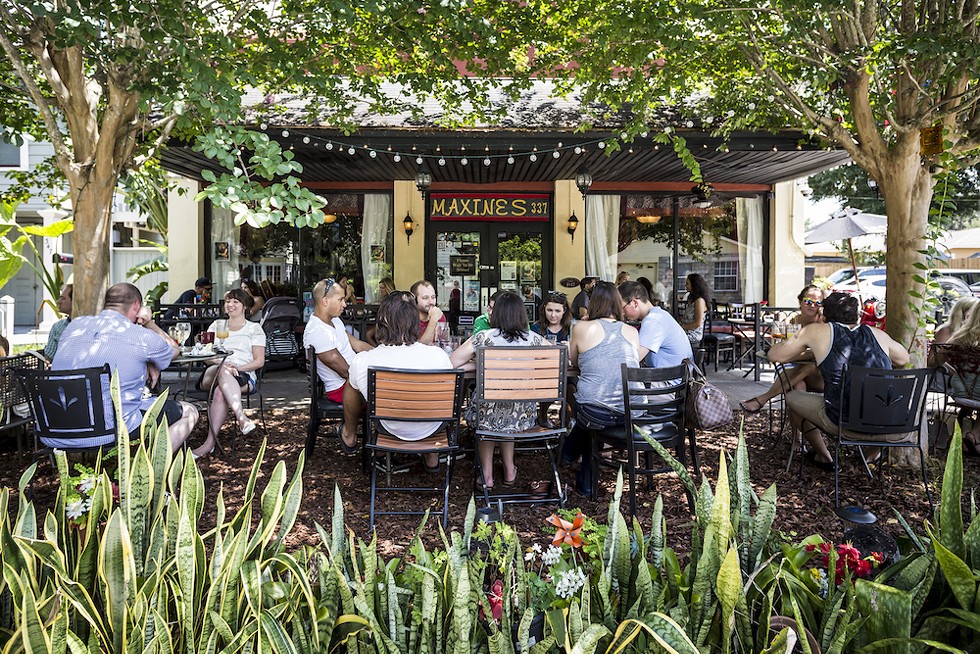 Crab legs, leg of lamb, prime rib, cured meats and cheeses as far as the eye can see – there's a reason this restaurant tops "best brunch" lists year after year. It's a little pricey, of course, with the all-you-can-eat spread costing $40 per person (there is no à la carte option, either), but the value proposition is in the unlimited booze, with mimosas and sangria flowing freely all morning and deep into the weekend afternoons.

You could swelter in line for an hour on a weekend for Briarpatch's blueberry pancakes, or the stuffed raspberry and brie brioche French toast, or the pork belly waffle with sunny-side-up eggs. Or, you could walk right in, sit down, and have coffee on the table in mere minutes on a weekday morning. The ultra-decadent menu is the same M through F, but the lack of crowds will have you feeling like you own the place.

SEE ALSO: Another Broken Egg, where every day is Sunday Funday with dishes like bacon jam-stuffed French Toast; the delightful dependability of First Watch

The Boheme at Grand Bohemian Hotel

Granny's coming to town? Tell her to pack her pumps and prime her perm, because the Sunday jazz brunch is fit for the queen she is. The menu is packed with upscale breakfast favorites, like a classic seafood omelet richly stuffed with crab meat and jumbo shrimp. Dive into it dressed to the nines, while a trio plays in the posh Bösendorfer Lounge.

SEE ALSO: Hamilton's Kitchen at the Alfond Inn for its genteel Winter Park charm; Oscar's at the Waldorf-Astoria Bonnet Creek

The International Drive mainstay is perfect for brunchers with a short attention span. There's plenty of art on the walls; the Gaudì-esque architecture twists and turns; a violinist or flautist or guitar player roams the aisles serenading diners. A psychic can read your palm or tarot cards on your way back from the build-your-own Bloody Mary bar. Have your portrait painted or drawn by one of the brunchtime artists. It's fun, loud, irreverent and still seems to be one place on I-Drive the tourists haven't figured out yet.

SEE ALSO: The Crepe Co. and the Tamale Co.

In a time when it's difficult not to rack up a $50 bill for a Saturday morning meal, Linda's stands as a bastion of budget-friendly fare. Here, you'll find a short stack of pancakes for $5, eggs benny for $8, and a cheese omelet for $5.50. The real steals are the breakfast combos, which all come with two eggs, as well as home fries, hashbrowns or grits, and toast or a biscuit for under $10.

SEE ALSO: Junior's Diner and the College Park Diner will also give you change from a tenner

Sure they're trendy, but trends become trends because people like them. It might sound like a lighter option, but the toasts at New General are sliced from hefty sourdough boules and piled so high you will almost definitely need a knife and fork. Ricotta, cashew yogurt, sweet potato puree, Nueske bacon, poached eggs, pumpkin seeds, sauteed greens, honey, fruit ... accompanied by skillfully crafted pour-overs and espresso drinks, this toast will be your newest home slice.

Everything here is crafted from non-GMO, organic and local (when possible) produce and there's nary a hydrogenated fat nor an artificial sweetener to be found. But struggle plates these ain't – this is vegetarian decadence. Try the fig and goat cheese flatbread sprinkled with hazelnuts, paired with a glass or two of sparkling rosé, and don't leave without ordering the "big-as-heck cast iron cinnamon roll" for the table.

BRUNCH AND A SHOW

Not a morning person? The easiest way to avoid having to make conversation when your brain's not fully engaged yet is to find someone willing to do it for you. The weekend Broadway Brunch at Hamburger Mary's brings production numbers from the likes of Grease, Les Miz, Barnum and more with hosts Angel Sheridan, Nicky Monet and the Broadway Brunch Bunch dancers. Plus eggs and mimosas!

Toothsome is famous for their insane(ly expensive) milkshakes, but their brunch menu shouldn't be forgotten, particularly by those who have a sweet tooth the size of Mount Everest. Bananas Foster waffles feature rum sauce, brown sugar and whipped cream, and the Chocolate Brioche S'mores French toast, stacked with graham cracker, chocolate and marshmallow fluff, has our molars smarting already.