Out of the blue

Trendy azure-hued taqueria is a model of efficiency 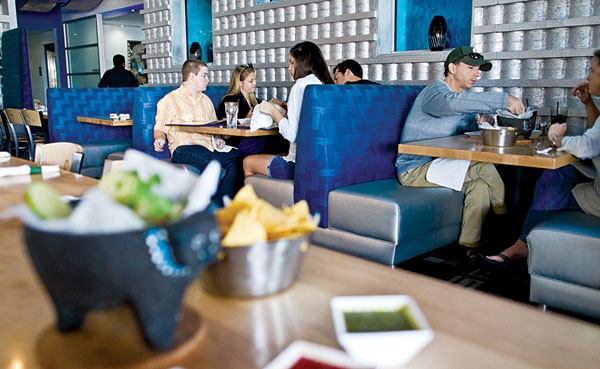 If restaurants were judged by efficiency alone, Agave Azul would be a candidate for the best restaurant in town. It’s an impressive scene watching servers, bussers and even managers turn tables in this perpetually buzzing restaurant – workers pounce on tables the moment they’re vacated, then clear them of scraps and usher in the next pack of patrons. Witnessing such timely turnarounds amidst all the hubbub and crammed seating doesn’t foster a breathe-easy mood, though, even surrounded by the dining room’s swaths of cool blues and icy silver accents. Even though we weren’t, we felt hurried. But that won’t stop the margarita-thirsty masses from eating this place up: The scores of patrons partaking in the 100 brands of tequila on hand validate Agave Azul’s raison d’être as a place to let loose. You’d think that with imbibing diners, the kitchen could ease up on the quality throttle, but they don’t. Granted, there’s nothing new here that you can’t find at, say, Cantina Laredo or Paxia, but the food is miles better than what was served at the P.R.’s Mexican Restaurant that once occupied this space.

Also like Cantina Laredo and Paxia, the guacamole fresco ($6.99) is a starter that’s heavily pushed by the waitstaff. It’s a chunky guac – almost too chunky – served in a traditional molcajete, the stone mortar and pestle that’s become de rigueur in more upscale Tex-Mex joints. The fact that the guacamole isn’t prepared tableside keeps the cost of the appetizer at a respectable level, unlike Cantina Laredo’s, which will run you close to $10. Two apps that caught our eye – goat cheese rellenos ($8.99) and the tropical ceviche martini ($7.99) – were unavailable, so we just dove into the mains, which were filling enough. The plato grande ($16.99), for example, featured a tomatillo-topped picadillo  enchilada, a tender and flavorful skirt steak and a corpulent chicken tamale slathered in a more-sweet-than-spicy mole sauce (our fave). Requisite sides of yellow rice, pico de gallo and charro beans were all pleasing enough, as well. Gorditas de carne ($9.75) weren’t the stuffed masa pockets we were expecting; rather, the fried pastry rounds were used to create a sandwich with a filling of shredded beef, refried beans, queso fresco, lettuce, pico de gallo and sour cream. A smoky, spicy salsa ignited the Tex-Mex classic just enough to feel a flicker of heat.

We devoured the plate of pastel de piña ($5.99), a warm pineapple upside-down cake, in a matter of seconds. Even the layer  of caramel, vanilla ice cream and coconut shavings couldn’t slow us down. Pastel de chocolate ($5.99), on the other hand, stopped us in our tracks, thanks to multiple layers of chocolate cake generously filled with chocolate mousse and frosted with chocolate buttercream and chocolate fudge. Ay, papí.

We also couldn’t help but notice the diverse and multicultural patronage Agave Azul attracts – we saw families with kids in tow, miniskirted revelers, retirees sucking back sugary libations and couples on date night. So while the lit-up entrance and trendy interior befits a South Beach nightclub, Agave Azul has a very broad appeal. Like its namesake plant, Agave Azul is sharp and a little wild, but when the staff takes a welcoming stance rather than a table-turning whirl, the restaurant can be quite intoxicating.