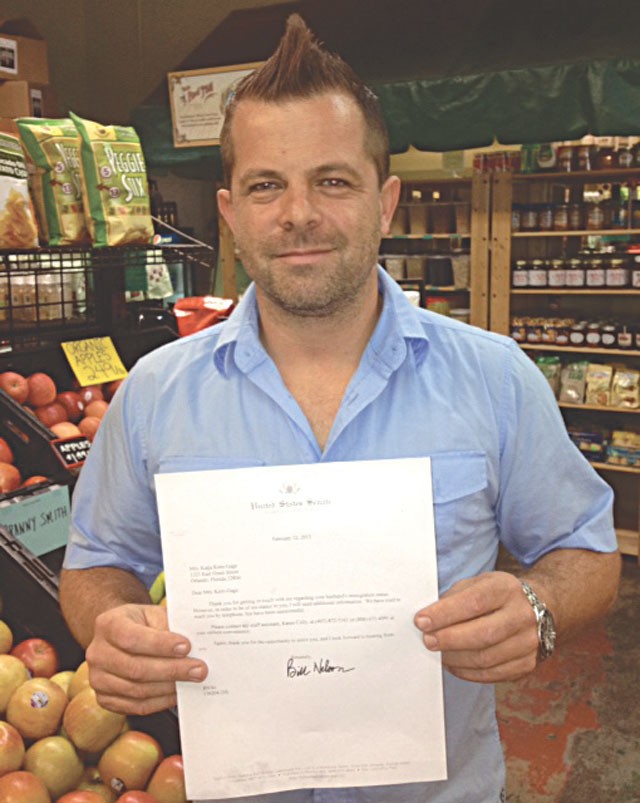 When you think of someone facing immigration problems, what image comes to mind? Probably not that of a Caucasian small-business owner who pays taxes.

Winter Park resident and Canadian citizen Troy Gage, owner of Eat More Produce, has been denied his visa to stay in the United States, leaving Gage and his family, along with Eat More Produce's 17 employees, facing financial uncertainty.

"All I'm trying to do is live the American dream," says Gage, who has to leave the United States by March 2. "How is it that when you enter the country legally and contribute to the economy you get denied a green card?"

Gage received his L-1A visa to move his Eat More Produce business to the U.S. in 2008, after having run a successful farm and hydroponic-produce wholesale market in Kingsville, Ontario. In 2010, he opened his Winter Park farm market, providing the community with fresh, locally sourced produce at affordable prices. Today, the shop, located on 17-92, sells dairy products, bread, wine and prepared foods, as well as produce.

"Right now we're expanding and aggressively hiring," Gage says. "We do weekly markets at YMCAs and at the Gaylord Palms. We just signed a lease on a place in Orlando to open up a second location."

Gage, who has no criminal record and seemingly good credit, applied for a green card earlier this year. While a visa allowed Gage to live in the country temporarily, the green card would give him and his family permanent residency in the community. After completing the extensive application process, Gage says, he received a letter from U.S. Rep. John Mica, R-Winter Park, offering to support Gage's case to immigration officials. Two weeks later, Gage was denied.

"This denial letter punched us right in the face," Gage says. "It just seems so contrary to what the economy needs right now. The letter says I was denied because the jobs I created aren't professional jobs like doctors, lawyers, etc. What is wrong with this? Common sense has to step up."

Gage called Mica's office and was advised to call a lawyer. Now, Gage is rallying his employees, customers and fellow community members to come to his defense. He created an online petition on Change.org and has collected nearly 1,000 signatures urging the U.S. Citizenship and Immigration Services, the White House and Gov. Rick Scott to renew his visa. Gage is also asking community members to call or email Gov. Scott, Sen. Marco Rubio and Congressman Mica, asking them to support his case.

"Congressman Mica is an advocate for his constituents and immigration is one of the many issues he advocates," says Allen Byrd, Mica's press liaison for the local district, who declined to discuss the specifics of Gage's case.

"What kind of precedent does this set for future immigrants?" Gage asks. "We promote healthy food and healthy eating and we're supporting local food producers. This situation trickles down to everybody. It's not just the 17 employees here that are affected. It affects everyone in this community."

This isn't the first time a Canadian citizen and Orlando resident has had his livelihood jeopardized by U.S. Citizenship and Immigration Services. In 2010, local music legend and philanthropist Benoit Glazer, a conductor for Cirque du Soleil, was denied his request for a green card. According to a letter he received from USCIS, "his accomplishments have not had a significant or sustained impact with [sic] their field." But, with the expertise of a lawyer and the weight of a congressman behind him, Glazer was able to successfully leverage his musical accomplishments to be granted EB-1 status by USCIS, which allowed him to remain here.

"We look at each application very carefully, and every case is examined on its own merits," says Sharon Scheidhauer, public affairs officer for USCIS and the U.S. Department of Homeland Security. "When we do deny someone an application, we lay out the reasons for denial clearly in the letter. If the applicant disagrees, they have appeal rights and we take another look at the application. If someone is denied a particular visa, they may apply for any other visa for which he or she qualifies as well. Still, the burden is on the applicant to prove his or her case."

Like Glazer, Gage is appealing his denial and banking on a politician to give his case the support it needs. Yet, short of winning a Nobel Prize, it is unlikely Gage will be able to fulfill the same green card criteria as Glazer.