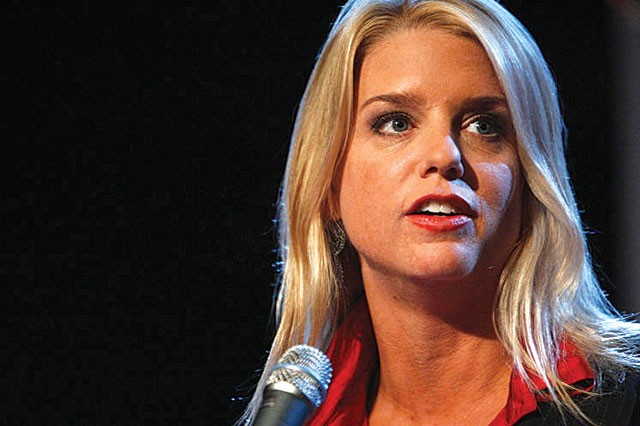 – Attorney General Pam Bondi in an Aug. 8 motion to the Miami-Dade Third District Court of Appeal

Cost to the Florida Department of Corrections when Bondi postponed the execution of convicted murderer Marshall Lee Gore in 2013, in order to host a campaign fundraiser

Amount Bondi’s “And Justice for All” political action committee received from Donald Trump in 2013 while the attorney general’s office was supposed to be investigating Trump. The investigation was called off.

It’s time to hate the gays again. Following some pretty scathing rulings on marriage equality coming out of Monroe County, Palm Beach County, Broward County and Miami-Dade County over a period of just 19 days – all in support of the 14th Amendment, all based on law and logic – everyone’s favorite confused contrarian Attorney General Pam Bondi decided it was time to hit the pause button on this bizarrely fabulous zeitgeist of social justice that’s sweeping the state and overwhelming her right now. Sometimes it really is too much to ask for our elected officials to slalom down the reason mountain, especially when they’re campaigning to the toothless fringes in far-flung fellowship halls. And sometimes the best thing to do is nothing, right? Except, in this case, she’s already been fighting the equality cases, so her argument that she wants to save “taxpayer resources … without burdening Florida’s judiciary” sounds like an ocean in a conch shell. Do you hear it? It’s totally the ocean.

Bondi has made it perfectly clear that it is her belief that the gay is totally like the Ebola virus, because she’s already been quoted saying as much: “Significant public harm” will befall all of us if Adam and Steve join Adam and Eve, thereby displacing the ban on gay marriage passed in Florida in 2008. It’s a biblical fact, and nobody disputes the Bible, ever.

Needless to say, the Democrats and equality-leaning groups were quick to pounce on Bondi (again) for looking dumb in public (again), and now we’re actually starting to feel bad for Bondi. Is that a thing?

Democrats pulled out a shorthand laundry list of Bondi’s other brilliant ideas – that one time she rescheduled a death-row execution so she could fly home for a fundraiser, her ill-advised defense of corporate polluters in the Chesapeake Bay (which isn’t even in Florida), her money-is-no-object continuation of the fight against Obamacare, her seeming affinity for (allegedly) corrupt donors like Donald Trump – before urging supporters to flood Bondi’s inbox with polite disdain. Make sure to use the word “stonewall,” because it has a hilarious double meaning here.

“Pam Bondi’s attempt to stonewall the efforts of LGBT Floridians to secure their civil rights because it’s an inconvenience to her re-election campaign is not just offensive, it’s unconscionable,” Florida Democratic Party political director Christian Ulvert argued in a statement. “If Pam Bondi truly cared about preserving taxpayer resources, she should simply stop standing up for the forces of discrimination.”

“We agree on one thing. Bondi should stop wasting taxpayer dollars,” Equality Florida chief executive officer Nadine Smith said in a statement. “We call on her to take the position of nine other attorneys general who have chosen not to defend an unjust law. Either end the appeals, or urge the Florida Supreme Court to take the matter up right away. There is no need to wait any longer. Florida families are hurting right now, and the only thing standing in the way of immediate relief is the state of Florida.”