Papa's got a brand-new bag

It's a classic tale: Boy meets girl; boy marries girl; boy and girl open restaurant; restaurant slays and becomes a Top Table of 2020. I speak, of course, of Papa Llama, the Peruvian bistro by Kevin and Maria Ruiz that's very much the Notting Hill of restaurants — equal parts beguiling, nerdy and charming. It's a bit of a tear-jerker too (the aji amarillo gives quite the performance) and, in the end, leaves you wanting more. Roll credits. Rewind. Replay.

Four years earlier, the Ruizes launched Papa Llama as a pop-up concept that soon garnered a rep for Kevin's fastidious and modern approach to traditional Peruvian cooking. But after all the hustling, the pair found a permanent space in Curry Ford West and had it spiffed up by Dap, the kool-kid architects every new restaurant wants. The open kitchen gleams in stainless steel and the interior, much like Kevin's creations, reflects a bright, clean, unadulterated aesthetic.

Ruiz treats his family's recipes with a sort of deferential esteem — his compositions are thoughtful and contemporary, but never overly playful. He cooks with great affection, as with the delicately fried papa rellena ($8), two gorgeous potato croquettes fattened with ground sirloin, jammy egg and aji panca — a mild, smoky chili paste. The crown of salsa criolla (red onion relish) and a slick of aji amarillo crema and fresno pepper sauce show real care and deliberation. Even a relatively simple plate of sliced avocados ($6), basted in aji panca then torched, had my dining comrade oohing on its arrival. I'd sampled it on a previous takeout run, but I really wanted to try it at the restaurant. This time, when the ruddy avocado slices were spread onto sourdough toast from Olde Hearth, the bread sustained its crunch.

I should take an intermission to say indoor dining is limited to 14 people and guests are required to complete a COVID-19 questionnaire when booking online. Maria, who tended to us throughout our meal, was masked at all times, as was Kevin. As she ran through the items on the purposefully focused menu, it became clear we'd be ordering all seven dishes. For $80, it's really the way to go for two people. From the all-natural selection of wines, we chose a bottle of Etna Rosso ($48) — poured using a Coravin — then went to town on the four mains.

A plate of battered calamari ($14) comes layered with basil, cilantro and mint to replicate the flavors of huacatay, the bold Peruvian black mint that's hard to come by stateside. Lime and pickled onions add some pop. It's not a dish we put a whole lot of focus on, not when an alluring lomo saltado ($18) with cherry tomatoes, red onions and USDA Prime skirt steak from Creekstone Farms stole our gaze.

Fries and jasmine rice are served separately, leaving the mixing of the chifa (Chinese-Peruvian) dish to us. Another chifa item — arroz chaufa ($14) — is a simple blend of fried rice, aji panca chicken, choclo (giant corn kernels) and bok choy, but of note is the wokky essence, arguably the most important component. The fourth main, a veg offering of deceptively straightforward pappardelle noodles ($14) tossed in a creamy huancaina sauce made from aji amarillo peppers, bursts into a mushroom cloud of umami courtesy of maitake and fried enoki mushrooms. 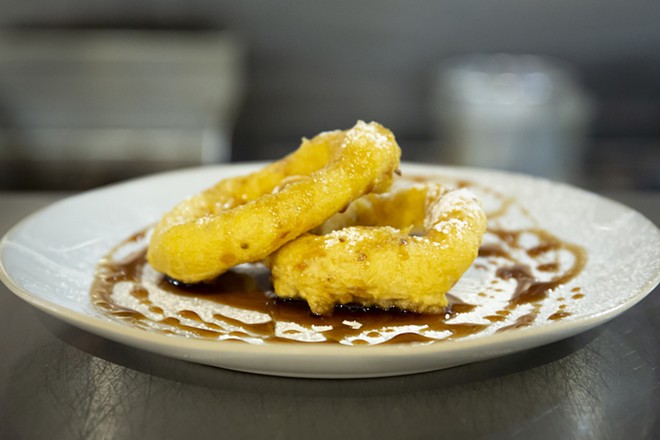 Picarones ($6), sweet potato doughnuts served with citrus-clove honey, make as syrupy an ending as Notting Hill's. The dessert isn't available for takeout, so don't even try (not unless you promise Maria you'll respect its integrity by eating it in your car). With the restaurant being empty, I felt at ease shamelessly licking the honey up with my finger. Still, it was real odd being the only ones dining inside the restaurant. Much like William Thacker and Anna Scott's first meeting, the experience, I have to say, was surreal, but nice.