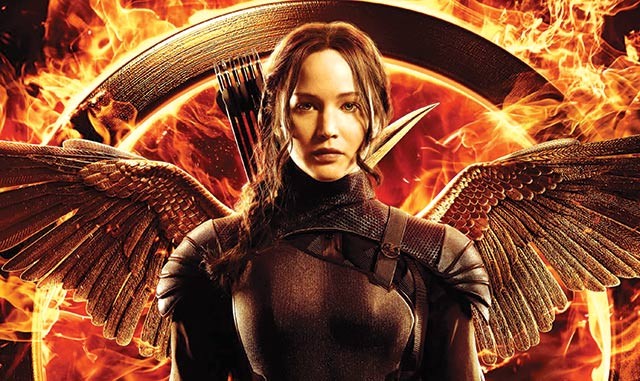 If ever there were a season to underline the differences between the have-everythings and the have-nots, it’s Thanksgiving. The Hunger Games is just a big-budget, star-studded elaboration of that point. Of course, you could save 10 bucks and watch desperate individuals fight for the scraps the elites toss their way by taking a trip down to the local Walmart on Black Friday, but where’s the fun in that?

The thing that has distinguished Suzanne Collins’ dystopic adventure series from the recent avalanche of YA novel adaptations is that instead of meaningless romantic fantasy (or, in the Twilight series, tortured Mormon-inspired morality) it has embraced science fiction’s best function: offering dramatic commentary on present-day concerns by depicting their worst possible outcomes. Panem is clearly Collins’ imagined future for the United States, a country dominated by a totalitarian Capitol that subjugates its huddled masses while living a shamelessly hedonistic lifestyle. The annual games that violently pit impoverished children of the outer districts against better-equipped pampered kids from elite districts are little more than high-tech bread and circuses, a way to reinforce the divide between the rich and the poor.

These are hardly new ideas, but Collins’ books and the successful film adaptations that have followed no doubt owe some of their success to the current state of our country, where social responsibility and justice for all has given way to laws and policies that blatantly favor the elite at the expense of everyone else. Katniss Everdeen is Collins’ response, a working-class hero and poster girl for the revolution that will inevitably come.

Too bad Mockingjay, Part 1 is more about the poster and less about the revolution. Picking up where Catching Fire left off, Katniss (Jennifer Lawrence) is now part of an insurgent army, holed up in the underground bunkers of militaristic District 13. Led by President Coin (Julianne Moore) and her PR adviser, Plutarch Heavensbee (the late Philip Seymour Hoffman), Katniss becomes the face of the resistance in an escalating war of propaganda machines. Her beloved Peeta (Josh Hutcherson), captured by evil President Snow’s cronies, has become her unexpected rival and serves as the Capital’s mouthpiece on state-run television channels.

The result is two mostly actionless hours of drab on-the-nose speechifying, people looking gravely at television screens, and Katniss wandering through the rubble of districts that have been bombed by the Capitol. The film is dour and lumbering, with only a handful of rousing scenes to justify the blatantly financial choice to split the novel into two films.

With a stronger script it might have been interesting to explore the emotional and psychological fallout of Katniss’ time in the arenas. But Mockingjay, Part 1 is not that film, no matter how hard its first-rate cast tries to elevate its impact or director Francis Lawrence (who also helmed Catching Fire) tries to give it an epic feel. The movie is leaden and uneventful, clearly marking time for Part 2 to deliver the big action set pieces and the dramatic consequences of Katniss’ choices.

While the Hunger Games films have never been particularly deep in their thematic explorations, Mockingjay, Part 1 seems especially devoid of social commentary or insight, missing the opportunity to delve into the Orwellian implications of a rebellion all too willing to exploit Katniss’ celebrity the same way its enemy did. It’s disturbing to think that President Coin’s neo-fascistic speeches and the accompanying chants of “hoo-rah” are to be taken as stirring exclamations of resistance, while the story pads its running time with a subplot involving Effie Trinket’s (Elizabeth Banks) help in designing Katniss’ outfit. It’s choices like these that lead one to think that maybe the producers are indulging in their own form of shallow manipulation.