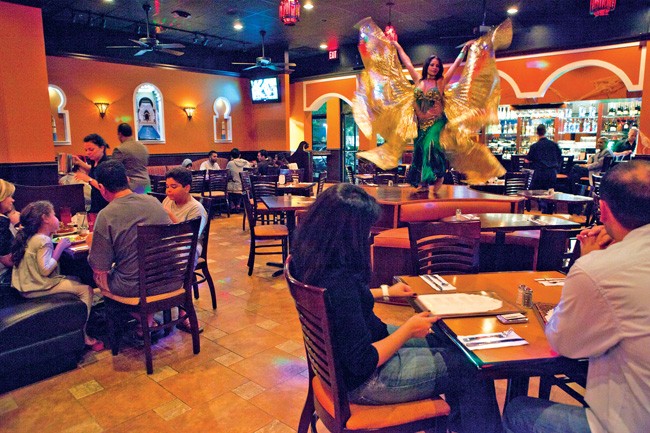 I was a little surprised to see Simo Soaf – the welcoming proprietor of MetroWest’s Kabbab House – greet us at the doors to Pasha, the new Moroccan restaurant and hookah lounge fronting the Mall at Millenia. Soaf, I learned, sold Kabbab House a few months back to become a player on the competitive Conroy Road strip where places like Sushi Katana and Greens & Grille battle it out with a host of upscale chains for a piece of the proverbial pie. My thoughts, naturally, turned to the exquisite chicken kebabs served at his former establishment, and whether similar gustatory pleasures would await me here.

As we were led through the large, seductively decorated dining room, Soaf mentioned that the six-person team in his kitchen is headed by executive chef Hassan Joseph Baba – a Moroccan who earned his chops working 14 years for Epcot Catering before helping open Park Terrace Bistro in New York (now closed) and helming the kitchen at Winter Park’s Circa 1926 – so hope, unlike our sense of hearing, certainly wasn’t lost. While the decor had elements of a Marrakesh casbah, the thumping Euro-Arab techno made it feel like a Casablanca discotheque. Thankfully, the volume was lowered somewhat so that sustaining a conversation wasn’t a complete impossibility.

In between sips of the finest Moroccan mint tea ($4.89) we’ve enjoyed anywhere in the city, we noted the few functional and aesthetic elements that differed from Soaf’s MetroWest couscouserie – a full bar running the length of the restaurant, for one, and in an area resembling a Bedouin bayt, a beautiful photomural of the Agdal Gardens and Atlas Mountains. The latter was a real focus-grabber until I was served a piping hot bowl of peppery harira soup ($3.99). The nourishing broth of tomatoes, chickpeas and lentils was highlighted by morsels of fatty beef (an ingredient noticeably absent in the version served at Kabbab House). Wiping my mouth with paper, not cloth, napkins was the sole unpleasantry in this otherwise thoroughly pleasing experience. The tiropita ($5.99) could’ve done with a bit more phyllo, but I was just happy to see the cheese pie – a rare sight even among Greek restaurants in the area – on the menu. No matter, cinnamon-and-sugar-dusted chicken pastilla ($6.99) afforded me my fill o’ phyllo; that is, until dessert, when I indulged in a martini glass of rosewater cream layered with shaved almonds and strips of phyllo in a treat called “Pasha delight” ($5.99).

Prior to that oh-so-sweet ending, we reveled in the lamb tagine ($13.99) – a glistening sesame-flecked shank sitting in a rich gravy sweetened by Moroccan prunes. Eggs would’ve been a nice touch, not that I’m complaining. More from the meat front: The royal kebab ($19.99) featured a tableside de-skewering of adana (ground chicken), chicken breast, kofta (seasoned ground beef) and shish (rib-eye cubes). With the exception of the surprisingly bland kofta (which required repeated dabs of spicy harissa), all were eye-rollingly good – a motion that carried through to the Athenian chocolate mousse ($3.99).

Pasha exudes a sense of occasion, and many patrons take the opportunity to dress accordingly. Belly dancing, live music and cocktails give good reason to linger, and the service was spot-on – there when needed, unseen when not. All in all, Pasha will have all your senses growling, “Here’s lookin’ at you, kid.”