Pawsitive Shelter Photography is saving pet lives, one glamour shot at a time

The chocolate-colored dog with light eyes sits shyly on a white backdrop as a woman fashions a purple petal scarf into a puffy collar. Sparkle is frozen in place as people in front of her jump around, squeak toys, click their tongues – really, anything that will make the canine glance at the photographer trying to take her picture.

Nothing works until Paul Wean gets down on his knees and crawls over to Sparkle. He pets her gently, and then somehow coaxes the 9-month-old shelter dog into standing long enough for the photographer to capture a couple of poses. 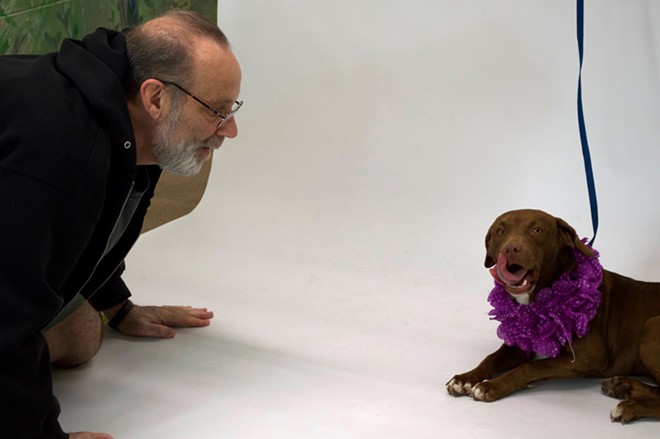 To Sparkle and anyone passing by this room at the Orange County Animal Services shelter, the scene is probably quite strange, but the volunteers who make up Pawsitive Shelter Photography know that taking this photo is probably Sparkle's best shot at finding a forever home and, ultimately, a second chance at life.

"We read emails all the time from people saying 'I saw this picture, and I knew I had to go see the dog,'" says Wean, founder of the organization. "They connected."

Since Wean and his wife, Joan, started Pawsitive Shelter Photography in October 2011, the organization has taken on 50 volunteers, photographed more than 13,000 animals at local shelters and received a couple of awards. The Weans say they got the idea after Joan Wean saw a CBS News report about a professional Texas photographer who started to take her own pictures of rescue dogs to replace the blurry, poorly lit photos of the dogs posted online. The rescue group's adoption rate soared.

"When I saw that, I literally felt like someone had lit a match underneath me," says Paul Wean, who also works as a lawyer in Orlando. "I had enough knowledge to be dangerous and more money than brains because I had good camera equipment. I said, 'We can do this.'"

At first it was just the two of them taking photos of dogs at the Orange County shelter, then staff at Wean's firm joined them. Joan Wean says there was a bit of a learning curve when they started, but as more professional photographers began working with them, the pictures improved. Now, the organization's photographers use colorful bandanas, scarves, furry boas and other props to enhance the playful attitude of an image. To make the animals look into the lens, volunteers will often bark, give out treats or shake a bottle of rice.

Pawsitive Shelter Photography goes to the Orange County shelter twice a week and to the shelter in Osceola County at least twice a month. Last Sunday, the group photographed 18 dogs in one session, but during the summer after breeding season is over, they will photograph upwards of 30 dogs. The organization, which Joan Wean says is always looking for volunteers, also takes pictures of shelter cats.

"We're pretty good at handling the difficult dogs, and we are always learning what to do better," Joan Wean says. "I think about half of our volunteers have adopted a dog we met during a photo shoot and that they've fallen in love with."

A lot of the work volunteers do comes after the photo session when they edit the photos. Paul Wean says he's stayed up until the early morning using Photoshop to delete leashes from the photos and clean up the white backdrop, which often gets scuffed. Orange County Animal Services gives the photographed animals one week from the day their picture is taken to be adopted, Wean says.

Working with the animals can also take an emotional toll on photographers. In the 2015 calendar year, Orange County Animal Services, which is an open-admission shelter, reports that it euthanized 5,157 animals. That's a 34 percent decrease from the 2014 calendar year, but it's still a difficult statistic to swallow for pet lovers.

Stephanie Patterson, a freelancer who volunteers for Pawsitive Shelter Photography, says she imagines the best-case scenario for every dog she photographs.

"My approach is that I come in here, take the picture and try to leave it at that for myself," she says. "I found I had to stop following a lot of the dog rescue pages on Facebook because they would post when the dogs were going to be put down, and that started to get to me. ... It's really hard because you want them all to live and be adopted."

Maritza Mamber, owner of Simply Pawfect Photography in Orlando, says the intake photos taken by shelter staff of the animals can be scary and off-putting to potential adopters. The work Pawsitive Shelter Photography does, though it can be draining, is important because the photos help convey the animals' personalities.

"It's not easy coming here taking pictures of the dogs because you never know if they will be adopted or go to the back room to be euthanized," she says. "It's sad, but I try to not get emotional and know that what I'm doing is to help them. Each time I go behind my lens, I'm like, 'OK, take a great shot, that way this dog can be adopted.'"

Wean says he wishes others would start their own organization like his to help shelter pets find new homes.

"These dogs and cats, they're innocent," he says. "They didn't ask to be semi-human, we asked them to. We make them helpless, and we have an obligation to meet their needs. ... If you want to mimic our organization, fine. I want people to do what we do, to create photos of shelter animals and get them adopted."