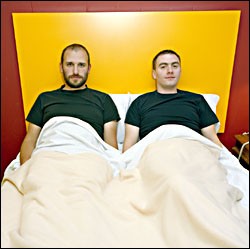 PEDRO THE LION We've been fans of David Bazan (aka Pedro the Lion) for some time, having seen nearly all his performances here (except the creepy Cornerstone ones). And we've gone to every show hoping to hear a favorite from early recordings like It's Hard To Find a Friend or Whole, only to have Bazan proclaim, "We don't know that one." The reason being that Bazan – who plays almost all of the instruments on the PTL recordings – usually recruits members of the opening bands he takes on tour with him to play either guitar or bass for the live version of Pedro the Lion, and accordingly said band member only knows a handful of songs. Even with the addition of TW Walsh as a semi-permanent member, you can still bet that this time around Bazan will have a limited set list. We're not expecting the guy to be a jukebox, but how about hiring a full backing band that can pull from the back catalog? Just once. (with Earlimart; 8 p.m. at The Social; 407-246-1419; $13)

YEEHAW JUNCTION BLUEGRASS FESTIVAL There ain't a whole lot that goes on in Yeehaw Junction for the other 361 days a year, unless you count the tourists who stop in just because those billboards on the turnpike bugged 'em enough. However, on this particular weekend, the whole raison d'etre for the "town" is made clear when the area around the historic Desert Inn fills up with campers and unreconstituted hillbillies who've come to watch the fiddle championships go down. This year, Rhonda Vincent stops in to headline and artists like Nothin' Fancy, Eddie and Martha Adcock and others round out the weekend. (continues through Sunday, Jan. 30; $12-$20 for individual daily admission, $40, $45 for full-weekend admission; www.originalbluegrass.com/yeehaw) 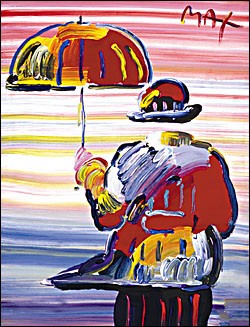 POP ART EXPLOSION Call it serendipity or just good old-fashioned karma, but two artists closely associated with the psychedelic movement are in town for weekend visits. Painter Peter Max adds a few new hues to the already vibrant color palette of Park Avenue Fine Art, showing off fresh examples of the bold tones and striking concepts that put him at the forefront of the 1960s pop-art craze – and earned him a sly namecheck in Yellow Submarine, among other tangible signs of hipster cred. (A more recent music-related project: painting 45 portraits of Bono.) Meanwhile, attendees of the Florida eXtravaganza collectibles show will enjoy an audience with comics artist Jim Steranko, whose brilliant work brought a pop-art sensibility to titles like Marvel's Captain America and Nick Fury, Agent of S.H.I.E.L.D. Through his cinematic layouts, illustrative type treatments and love of disembodied images floating in white space, Steranko sprinkled psychedelic stardust on ground broken by the great Will Eisner, who passed away Jan. 3 at the age of 87. So by showing up for Steranko's FX gig, you'll be respecting the pop and the grandpop all at once. (Peter Max 7-10 p.m. Friday and Saturday, 1-3 p.m. Sunday at Park Avenue Fine Art; 866-398-8390; free; Florida eXtravaganza 4-10 p.m. Friday, 10 a.m.-6 p.m. Saturday, 10 a.m.-4 p.m. Sunday at Orlando Expo Centre; $6-$40)

DAVID CROSS, MICHAEL MOORE, JIMMY CARTER It isn't often that we get famous names like this simultaneously passing through our podunk town. This Friday, David Cross stars in/as Winnie-the-Pooh opening at Orlando Repertory Theatre. You may remember his name from HBO's cult comedy hit Mr. Show, or more recently as Tobias Fünke on Arrested Development. And anyone worth a spit knows who Michael Moore and Jimmy Carter are, but did you know they're at Pat O'Brien's in CityWalk on Tuesday? Yep, they'll be playing piano together. No shit. Yes, you read correctly, but no, it's not what you're thinking: If you happen to make it out to any of these performances, you'll continue the tradition that brought dozens out to see Jim O'Rourke at the old Go Lounge or Bodhisattva, only to figure out around four beers later that this was not a performance by the Chicago indie musician/producer, but an open mike night hosted by a local guy. Next week: Davy Jones at the Altamonte Chapel. (Winnie-the-Pooh, 7 p.m. Friday, 1 p.m. and 4 p.m. Saturday and Sunday at Orlando Repertory Theatre; 407-896-7365; $12.50; Michael Moore, Jim Carter, Judye Freeman, Don Peters and Mike Bohnsack perform Tuesdays at Pat O'Brien's – Universal CityWalk; 407-224-2100; free, $5) 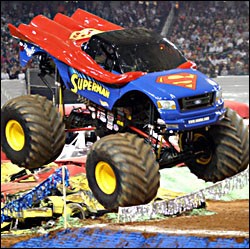 SUPERBOWL OF MOTORSPORTS As surely as springtime lures the swallows back to Capistrano, so does the prospect of an Orlando winter beckon that gentlest and noblest of creatures, the monster truck. A January tradition within the cold, concrete environs of the Florida Citrus Bowl, the Superbowl of Motorsports brings together the top vehicles in outdoor entertainment for an engrossing evening of car-crunching, wheelie-popping, mud-churning action. By this point, the bill-topping position of morbid monstrosity Grave Digger is beyond a given – GD, after all, is to monster trucks what Anna Nicole Smith is to public intoxication – but even the acolytes among us are getting somewhat weary of the green-and-black marauder's protracted dominance of the sport. So a rebellious impulse deep inside us is pulling for an upset win by Superman, a DC Comics-sanctioned ride that made its debut at a Jan. 8 event in Atlanta. "Even if I am not really Superman, and I'm just driving the Superman truck, it still makes me proud," says driver (and former wrestler) Chad Fortune. For his sake, here's hoping that pride goeth before a whole mess of the other guy's broken glass. (7:30 p.m. at Florida Citrus Bowl; 407-849-2020; $12, $15)

THE REDWALLS This young Chicago quartet got a little twangy chocolate in their power-pop peanut butter, which makes them at least slightly more interesting than the ever-expanding ocean of limp-wristed purveyors of saccharine confections. There's a certain Midwestern roughness to The Redwalls' sound, and although we love that Keane song as much as you do, The Redwalls don't make us feel nearly as girly. (with Keane, The Zutons; 7 p.m. at House of Blues; 407-934-2583; $15-$35)

RELIEF! We must say that we've been pleasantly surprised by the way the people of America (if not necessarily their government) have responded to the tsunami disaster. Given our country's track record when it comes to helping out brown people in need, the spontaneous and overwhelming charity that's been directed toward the victims has been truly heartening. However (you knew this was coming), that thin line between "selfless assistance" and "opportunistic self-promotion" didn't take long to cross. Whether it was Cher donating her take from one Sacramento concert, a French soccer player paying his penalty fine to a relief fund or the dozens of bands trying to drum up attendance at their shows by calling them "fund-raisers," we have to question the cost/benefit equation some people are using when determining their contributions. Not to say that any and all of this donated money isn't needed, it's just that when you've got 150,000-plus dead people, there really shouldn't have to be an "up side" to encourage people to do their part. That said, there's totally an "up side" to this all-locals benefit show: Not only do the organizers seem genuine in their desire to do something, but we're way stoked to see Matt Bloodwell's awesome new band (Megaphone) sharing a bill with the likes of Amy Steinberg and the always-challenging Band of the Name. Although it feels a bit creepy to plan a drink-and-rock-filled Saturday around the suffering of others (and the fact that the unavoidable down side will be sets by crap acts like Big 10-4 and Ask Me Later), we'll just double our donation at the door and leave our guilt there as well. (3 p.m. at Wall St. Plaza; 407-849-9904; $10) 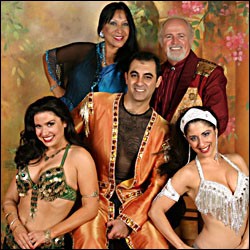 BELLY DANCE GALA SHOWS There shouldn't be any surprises in the discovery that the topper for a weekend of lusty, musical midbody workouts is a man. Throwing testosterone into the mix is a recent trend in Middle Eastern dance, and a dozen or so award-winning dancers, men and women, will share the stage for two evening spectaculars, following hours of workshops. It's a Lawrence of Arabia twist on the genre, and the star of the Babylon Breeze Productions shows is Amir Thaleb of Argentina. His body lithe, his chest hairy (see www.amirthaleb.com), Thaleb – artist and choreographer – is acclaimed in Middle Eastern dance, which is quite popular in South America. Costuming is a big deal for the guys, as there is less tradition to fall back upon for inspiration. So appreciate the nuances of Middle Eastern dance that the organizers write about in their press release: "about as far from humdrum and ordinary as the law will allow." (8:30 p.m. Friday and Saturday, Jan. 29 and 30 at Crowne Plaza Orlando Airport; 407-616-6313; $15 Friday, $20 Saturday)

ORLANDO RECORD & CD SHOW We at Selections aren't known for our financial wisdom. Want proof? Watch us in action at a record show. We could barely be more degenerate (or pathetic) with our cash if we had been set loose inside a poker/liquor/hooker exposition. These events have a surreal intensity – no, the grey marble vinyl, not the transparent brown, dipshit – that is utterly lost on outsiders. If you ever thought that The Simpsons' "comic guy" was the height of arcane, alternate-universe obsession, stop in here for a while. We'll be the ones with glazed eyes and empty wallets. (10 a.m.-4 p.m. at Central Florida Fairgrounds; 352-665-0259; $3)

ORLANDO PREDATORS VS. COLORADO CRUSH Our colorful crusaders start another season, the slate wiped clean. Though the decision was down to the wire, coach Jay Gruden agreed to lead the parade through 2008 – big score – and Pred games are back on WQTM-AM (740), the "Home of the Orlando Predators." Our strategy will be to follow the actions of Klaw, the very cool helmeted and armored Predator mascot who's no fruity Stuff. (noon at TD Waterhouse Centre; 407-849-2020; $10-$50)