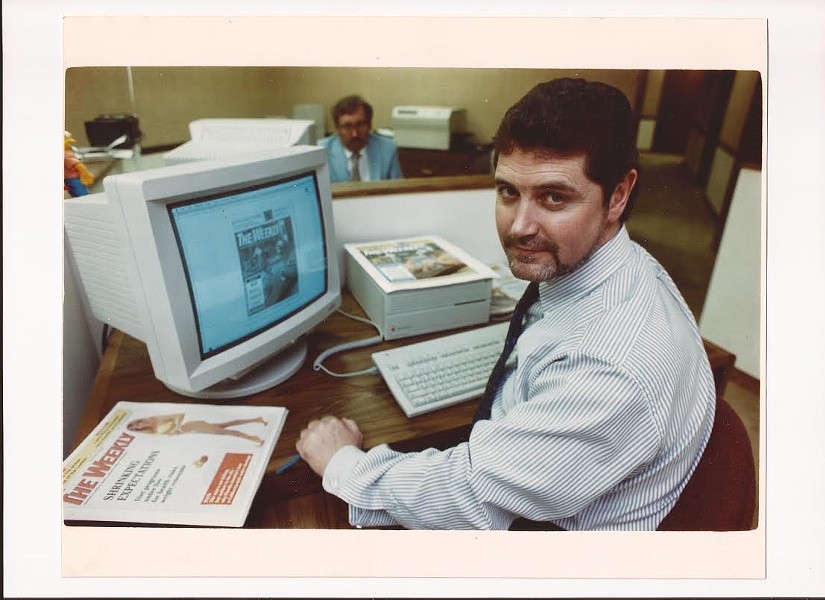 The Weekly — as it started out — was a gift in my life and, fair to say now, the life of Central Florida. The giver was a man named Peter O'Sullivan. A brilliant and mischievous Brit, Peter led metro dailies in Houston and St. Louis before returning to the racy Canadian tabloid where he'd earlier made his mark, and in 1990 the Toronto Sun dispatched him to Orlando with a mission: Remake a throwaway newsprint product, the Orange Shopper, recently purchased by the Sun. Because I'd already worked with Peter to launch a newspaper from scratch, he asked if I was interested. I wasn't – not really. Dim outsiders routinely dismiss Orlando as a bland plastic paradise of man-made tourist magnets, and having been a reporter in South Florida, I mistakenly held that view times two. But I revered Peter. Before I signed on to help create what eventually became Orlando Weekly, I imagined a quick exit. I stayed 12 years, because I'd never had so much fun.

It debuted that October as a feature magazine meant to deliver advertising to your lawn, whether you asked for it or not. Soon enough it became a pick-up guide to the events, trends, politics and players worth celebrating – and a dart for any that deserved it. When then-Mayor Glenda Hood targeted tattoo parlors as the scourge of a rebounding downtown, we cajoled movers-and-shakers – a college administrator, a leading businessman – to strip and show us their ink. Such playful irreverence was part of the paper's DNA. Who but the Weekly would examine the connecting tissue in a single weekend that welcomed two big gatherings of men, one the conservative religious Promise Keepers, the other hirsute gay bears?

We played ahead of the curve. Long before the condos and street fountain arrived to define Thornton Park, we profiled the pushy visionary, Phil Rampy, who christened it; although The Blair Witch Project would hit the covers of Time and Newsweek, OW readers met the local filmmakers much earlier, and they traveled to the Cannes film fest with cameras we gave them to document their trip. Did we amuse ourselves? You bet. (An early feature about over-the-top public restrooms was assigned, I think, because the headline was inevitable: "Splash in the can.") But point-of-view storytelling was there from the start, and the activist edge only grew sharper. During the soft opening of Disney's Animal Kingdom, we snuck international PETA president and co-founder Ingrid Newkirk inside. When Jeb Bush tried to hide his biggest early backers in a gubernatorial campaign, we made the rest of the media take note by finding and printing the names. To list more – so many more – would risk the offense of overlooking them all.

What lingers is this: Orlando Weekly created a community. Because so many creative folks came and went in Central Florida, it always felt like one big meet-and-greet, and the Weekly aspired to be the open invitation. It spoke to those who wanted to be a part of it – and some who walked in the door became faces of the franchise. Credit goes to them, and to every contributor whose ideas and talent pushed it forward, inviting readers to go, to listen, to laugh, to fume, to see, to act, to vote, to engage.

Mostly, though, I credit Peter O'Sullivan, who got it started so the rest of us could follow through.

Jeff Truesdell was editor of Orlando Weekly from October 1992 through May 2002.