Poison in the well

The EPA’s investigation of a toxic site in Parramore took two decades. How many more will it take to clean it up? 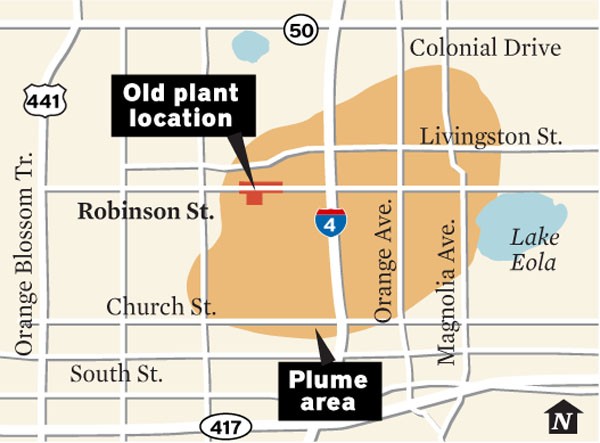 On Sept. 13, 1988, hydrologist Anne Bradner arrived in downtown Orlando to draw samples from a water-monitoring well at the southeast corner of Jefferson Street and Gertrude Avenue in Parramore. Her employer, the U.S. Geological Survey, suspected that a coal-gasification plant had polluted soil and groundwater in the area. When the results came in a week later, the organization’s fears were confirmed. High concentrations of volatile compounds were detected; further investigation was  recommended.

Twenty-two years later, that time-consuming investigation is finally wrapping up. Next week, scientists from environmental consulting firm Arcadis will visit the area to do a final study of the site of the former Orlando Gasification Plant before it enters into the long, slow process of remediation. In 2003, the Environmental Protection Agency designated the site a “Superfund alternative” – a site that fits the federal government’s definition of an uncontrolled hazardous waste site (a Superfund) but does not qualify for federal funds for cleanup. Remediation of the Orlando Gasification Plant will have to be paid for by those responsible for polluting  the property.

The coal-gasification plant (also called a manufactured gas plant) left a mile-long swath of tar-tainted water percolating through the Upper Floridan aquifer beneath downtown Orlando. The EPA says the plume of contamination is not an immediate health hazard because the city gets its water from wells drilled deep into the Lower Floridan aquifer, which is separated from the Upper aquifer by a “confining layer” of rock. Though the county uses water from the Upper Floridan, hydrologists say its water sources are not within range of the plume. Activists, however, say it could take decades to clean up the contamination in the Upper aquifer, and at the rate the region consumes water, it may soon need to tap into the Upper aquifer to meet demand.

According to the St. Johns River Water Management District, a state regulatory  agency that oversees water use in the region, human withdrawals from the Floridan aquifer will outpace the natural recharge rate in 2013 due to “rapid growth, poor planning, and an inefficient use of water.”

“We’ve been so blessed to have one of the most productive sources of freshwater on the planet, yet we’ve taken it for granted,” says Jimmy Orth, executive director of St. Johns Riverkeeper, a nonprofit watchdog organization for the St. Johns River and its watershed. Compared to processes like desalinization, Orth says, drawing drinking water from the aquifer is cheap and easy, but the pollution in the aquifer “may have eliminated an option that was much more cost-effective.”

The Orlando Gasification site, located along the 500 and 600 blocks of West Robinson Street, is one of very few former manufactured gas plant sites being addressed by the EPA. The agency estimates there may be up to 5,000 such sites in the country, but only 28 have entered the Superfund programs; aside from Orlando, there are five other such sites in Florida, located in Jacksonville, Ocala, Sanford, St. Augustine and Tallahassee.

Today, the majority of the Orlando site is a fenced-in equipment stockyard for Teco Energy, a company that distributes natural gas in Central Florida. The EPA has named Teco, along with Progress Energy, the Atlanta Gas Light Company and the City of Orlando, as one of the “potentially responsible parties” for the pollution, so the company will likely foot part of the bill for the investigation and remediation of the site, which could easily reach millions of dollars. The Teco property adjoins the railroad tracks that, a century earlier, brought carloads of coal to be shoveled into generators where it was heated to produce gas. From 1888 to 1960, gas manufactured at the Orlando plant provided heat and light for thousands.

“There’s nothing spectacular about gas,” an article about the plant that appeared in the April 1923 edition of Orlando Magazine said. “[But] if you were to see the process by which it is evolved … you’d have greater respect for that tiny little flame which is only waiting for you to touch a match to it.”

Today, however, that process is associated less with human ingenuity and more with the toxic byproducts that outlive the plants that produce gas. Over the years, rains and flooding spread chemical wastes off the property and into antiquated drainage wells drilled into the Upper Floridan aquifer. (Modern drainage systems, by contrast, direct runoff to rivers, lakes, shallow “surficial” aquifers or water treatment plants.) Bradner presumed this is why she found a “hydrocarbon plume” – a vast swath of water polluted with coal-tar compounds such as benzene and flourene – in the Upper Floridan aquifer, measuring about a mile long and a half-mile wide, directly beneath the former plant. The plume has crept slightly northeast in the past 20 years, says Robenson Joseph, the EPA’s man in charge of overseeing the Orlando site, but is still essentially the same size, and in the same place, as it was when discovered more than two decades ago.

According to the Florida Department of Environmental Protection, the rock that separates the city’s source of drinking water in the deep Lower Floridan aquifer keeps the pollution from the Upper aquifer from reaching it. Though Orange County draws much of its water from the Upper Floridan aquifer, hydrologists say the pollution in the plume is not likely to move laterally.

“With these types of cleanup sites, we are well aware of the wells in the area, and we’re certainly sure to monitor those more closely,” says Florida Department of Environmental Protection spokeswoman Lisa Kelley.

Bill Belleville, a local author who special- izes in nature and conservation, isn’t convinced that polluted water will stay in one place. “Mixing of water can and does happen via fractures and fissures,” he wrote in an e-mail to the Weekly. “If you look at the analysis of individual springs in the [area], you’ll see that this mixing will occur more often than suspected.”

Joseph would not comment on how the agency will address the pollution in the  aquifer, calling any comment before a  March feasibility study is complete “wild speculation.”

In her 1989 report on the plume, however, Bradner offers a sobering suggestion: Dilute the pollution in the water to acceptable levels. According to retired U.S. Geological Survey geologist Tom Haltom, who has observed the Air Force extracting its own hydrocarbon plume from an aquifer under Sacramento, Calif., for the last decade and a half, that’s still the best option – unfortunately. He says dilution is a crude and laborious process that never fully rids the aquifer of pollutants. “Pulling the water out, filtering it, putting it back in, filtering it again – you have to do that for a heck of a long time,” he says.