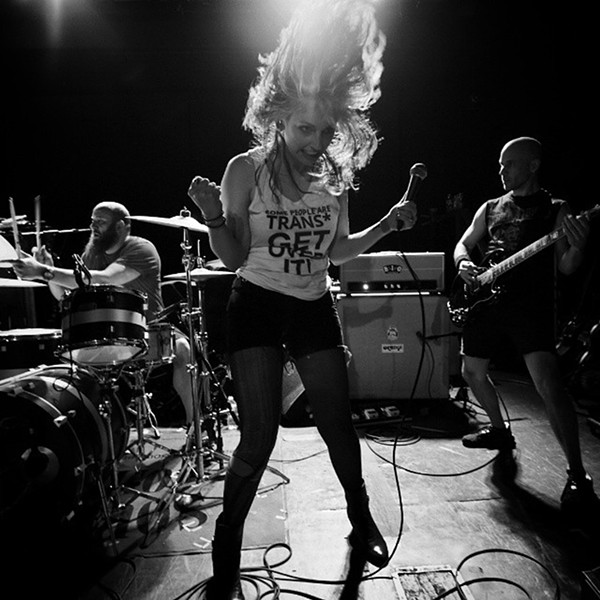 War on Women, who seamlessly tie gender politics to punk rock in a way that would make Kathleen Hanna proud, provide a voice for the voiceless. Led by fierce frontwoman Shawna Potter – a performer whose intensity onstage straddles the line between pouncing lion and purring kitten – the band's inclusion for the entire duration of this summer's Warped Tour is as much a surprise to their fans as it is a potent strike against the boys' club mentality of the festival circuit.

"What our sexist capitalist society deems as valuable, what's worth spending money on," Potter tells me, is the bigger problem. "Research shows that when women's voices are heard about 25 percent as much as men's, everyone's impression is that women were talking too much ... that contributes to femme bands just not getting the same kind of attention as male bands." Her advice to those who can build a lineup: "Have more female- and queer-friendly bands, and help lend legitimacy to the bands out there now. ... I can't speak for people of color, but I can say I don't see a lot of black and brown folks in the bands at major festivals, either."

It's not just about the music for War on Women, it's about surviving as a politically charged band in an age that is, let's just say, challenging.

"Playing in this band and putting ourselves even more out there, it's partly just knowing that if you want something done, you have to do it yourself, but also being sensitive to the fact that not all marginalized people should be forced to put themselves on the line, their lives are already on the line in many ways," Potter explains. "Some people are shy and non-confrontational and they shouldn't have to become performers in order to protest, you know? So those of us comfortable doing that should do it. We're comfortable with it, as a band; we always have been."

In addition to playing every date of the summerlong tour, War on Women will partner with the organization Safer Scenes to provide a booth where people can talk about sexual assault prevention and bystander intervention at shows, Potter says. "Anyone interested in what they can do to be proactive about interrupting violence and harassment at shows, whether sexist, racist, transphobic, Islamophobic or ableist."

Potter will be taking it a step further by running a daily workshop called Creating Safer Spaces: "It's an opportunity to go more in-depth and talk about attendees' personal experiences and how we can incorporate these skills into their lives."

For those looking to keep the day a little lighter, her bandmate, guitarist Brooks Harlan, will be holding a music-themed workshop that centers more around "gear, playing live music, doing sound, teching, writing songs." Basically everything you need to know to make the jump from the audience to the stage.

Potter remembers being a fan, attending a Warped Tour. "It was either 2000 or 2001, and I remember seeing Anti-Flag, which is wild because now we're a band that has toured with them a few times and they will join us on [Warped] halfway through – so surreal! I also vividly remember a female DJ tent and hearing this woman talk about supporting women in music, and also pointing out her C-section scar and saying she was proud to show it off, and it was silly to cover it up when it was so hot outside. I always thought that was so badass." War on Women look set to continue that lineage of badassery every single day on this year's Warped Tour.