Super Size Me director bottoms out with non-doc 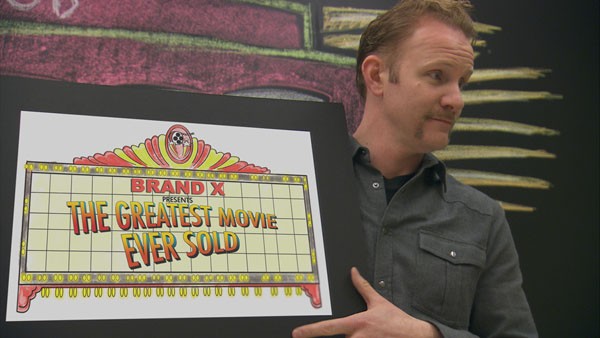 In 2004, filmmaker Morgan Spurlock captured audiences' imaginations with a documentary in which he turned the camera on himself to prove a point - that fast food is not only ubiquitous but toxically so - with self-examination, pluck and an everyman curiosity. He made it seem like anybody could blow out their tiniest nagging anxieties to "docbuster" proportions, as long as they were charismatic, open to scrutiny and willing to chisel away at corporate barriers until they were forced to come down. Super Size Me took us back to the days of Michael Moore's Roger & Me and the then-novel concept that making a documentary could be as simple as, "I have a question and I'm not that smart,  so I'm going to learn as I go and take you along."

Seven years and many diminishing returns later, Spurlock has made a non-documentary - in fact, it's hardly a film. Pom Wonderful Presents: The Greatest Movie Ever Sold (yes, the title is a huge chunk of his joke) sets up its premise right off the bat: Spurlock will fund a documentary about branding, marketing and product placement in the entertainment world, and it will be financed by corporate sponsors! He'll sell naming rights! He'll only wear shoes, or pump gas, or stay in the rooms or drink the beverages of companies that fund his film! Wait, wait: There could be ads within the movie for those products and signage behind the people he interviews!

One problem: He forgot his question. Actually, it's more of a freshman-level observation: "Hey, marketing is all around us, man! Like, everywhere you look there are logos and somebody trying to sell us something. Weird."

He promptly meets with high-level product placement experts and branding managers, some of which take him on as a project and play dumb. "You could be a brand yourself!" marvels one ad exec who's clearly schooled in the art of saying a lot while saying nothing. Of course he could: He is a brand already. That's why he has 19 producing credits to his name and has appeared everywhere from Top Chef to The Simpsons, The View to 20/20.

That's why you took a meeting with him in the first place, branding guy.

Spurlock gleefully sells himself and his idiotic idea throughout the movie, and the rare instances when he feels compelled to, you know, talk about his original point, he interviews either people on the street who know little about the inner workings of the marketing machine in Hollywood - "What brand are you?" is a typical meaningless question he poses - or the usual social-commentary suspects: Noam Chomsky and Ralph Nader, for instance. They don't really say anything, either.

The few times he actually speaks to Hollywood directors, which, if I understand his premise correctly, was the whole point - we learn that product placement is increasingly ubiquitous - but he does no digging. He chats up Peter Berg, the mastermind behind the amazing Friday Night Lights TV show, who tells him that corporations don't care about art, but they don't meddle much. Or J.J. Abrams, whom Spurlock cuts off after a few seconds to get back to his own story of selling his movie.

Unforgivably, he nails down Brett Ratner, the source of all things unholy (according to some cineastes) who, besides directing films like Rush Hour and X-Men: The Last Stand, works on the side as an actual product placement advisor for a $1 million annual retainer. Spurlock doesn't bring this up, but does let Ratner off the hook when Ratner literally says, "Artistic integrity? Pshaw."

Spurlock visits Sao Paulo, Brazil, where all advertising signage has been outlawed, and a school in Broward County that has resorted to selling ad space on school grounds. Guess what he talks about the whole few minutes he's there? His movie.

Pom Wonderful Presents is perhaps the most pointless, indulgent, incurious documentary I've ever seen. I have little objection to corporations funding documentaries, setting aside this film's rug-sweeping of a potentially game-changing proviso in Pom Wonderful's contract: final approval of the entire film. (Spurlock claims via title card at the end that he had control, but there are exactly a million reasons to doubt that.) If, someday, we're given Pom Wonderful Presents: The Congolese Genocide Story, I would say that's money well spent and needed. But we don't need a giggling Morgan Spurlock wasting 90 minutes and couching it as a "documentary." That's no less than intellectual dishonesty. If I wanted that, I'd rather see it in Dr. Pepper Presents: Iron Man 3.