Maybe because the iconic images of the movement are so bright and shiny, sometimes even goofy, Pop Art can seem empty-headed. But the sharply selected group of works in Pop Art Prints, a traveling exhibition curated by the Smithsonian American Art Museum opening at the Mennello on Friday, shows how those poppy images really documented the bursting bubble of America's blind faith in its institutions.

Mennello Museum director Shannon Fitzgerald says, "In the '50s and the '60s, these artists turned the art world upside down. [This work] is funny, silly, but so openly critical of what was going on in the world.

"And they committed this faux pas," she continues, "they went mechanical, and used all this technology [like Xerox]. It might seem old-fashioned in the context of how quickly youth now can transmit and reproduce and distribute their work," but Fitzgerald sees it as the speedy forerunner of today's digital art.

Roy Lichtenstein's daffy dots and speech balloons and Andy Warhol's soup cans and Marilyns are probably the most iconic imagery of Pop Art. Some of that Lichtenstein comic-book art is here, but so too are his "Moonscape" and "Haystacks No. 3," both highly mediated representations of the natural world. "Moonscape" is printed on Rowlux, an almost holographic plastic that's as far from a "natural" material as one can get; in "Haystacks," Monet's famous piles of wheatstalks are glimpsed not in the lambent haze of a Provence afternoon but just barely through a shimmering storm of Benday dots.

And Marilyn is here, yes, but the other Warhols in Pop Art Prints are from his "Death and Disaster" series. For Warhol, usually so carefully bland, these are coruscating indictments of American culture – Jackie Kennedy in her naked pain at JFK's funeral; police dogs snapping at protesters in Birmingham, Alabama. "That was a devastating moment," Fitzgerald says. "We can draw a line and connect that to Ferguson ... how many years later are we still having this conversation?" 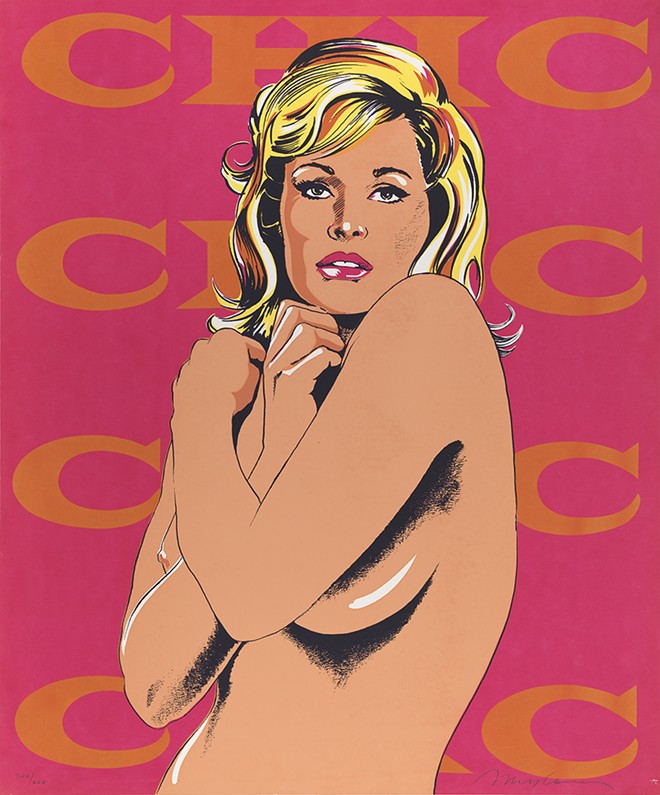 Politics aside, another touchstone belief Pop Art demolished was the concept of fine art as precious single snowflake. All of these prints were made as multiples, the idea being to blanket the world with the work: "Warhol wanted more people to be able to buy his work and live with it," says Fitzgerald.

The use of advertising tropes and forms, so commonplace now, would also have been shocking then – yet another subversion of the line between fine and commercial. Tom Wesselmann's "Cut-out Nude" is a descendant of odalisques throughout art history, yet her takin'-it-easy grin and plasticky sheen feels straight out of a Newport ad.

"There were absolutely women involved in the Pop Art movement," Fitzgerald says, lamenting the lack of, for instance, a piece or two by Martha Rosler. (Indeed, this reporter had hoped for a Marisol.) But the show was curated by the Smithsonian Institution, and so the Mennello plans associated programming to address and dialogue with the works on the walls.

"We are going to have a video interviewing 12 artists who participated in a revisionist history show at the Brooklyn Museum with the Pop Art women," Fitzgerald says.

There will also be the Family Days the Mennello is known for, with kids' activities involving Lichtenstein's dots and a "Make Your Own Warhol" event. But, Fitzgerald says, "I want more things for adults to do. We need to connect what's going on in here with the outside world." Pop Art Prints seems like the ideal show for the Mennello to bridge the gap between kids and adults, between folk and fine art.