Rollin’ on the avenue

Since Park Avenue mainstay Shiki Sushi vacated the space at 525 S. Park Avenue a decade or so ago after nearly 20 years in business, it gave way to a revolving door of sushi joints trying to fill the void with varying degrees of failure. Umi, the latest occupant, and one touting "Japanese fusion," had enough self-generated marketing buzz to make you believe it was the Sushi Savior of Park Avenue. But stepping into this prospective pescatorial promised land didn't exactly have us shouting its praises from the rooftops; not immediately, anyway. (That came later.) The space is bisected – bar on one side, main dining area on the other – and simply, and understatedly, adorned. A paneled screen from the Edo period is a distinguishing feature in the dining area, but so are the servers, many of whom appeared determined to please, even edify, guests.

We listened intently while receiving a requisite lesson on the makeup of menu items that struck our server's fancy. A whirr of descriptive English and Japanese ultimately manifested itself in dishes that impressed in both presentation and palatability. A sunomono salad ($9) had more than just cucumbers. Much more. White fish, octopus, shrimp and crab all went into the superbly clean, citrusy and reasonably priced dish. 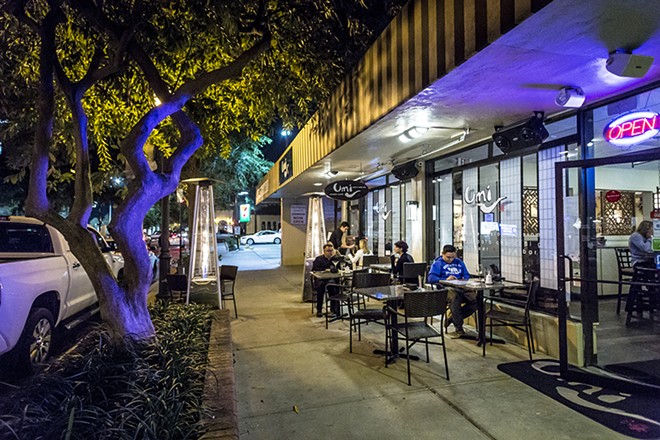 Near-translucent slices of snapper ($12) cured in sake, kelp and salt were magnificent, even with a messy crown of microgreens, shiso and fried scallion. Our digits ensured the vinaigrette of truffle and ume (Japanese apricot) didn't go to waste, unlike panko-crusted kimchi croquettes ($7). Though hearty and perfectly fried, these microgreened pan-Asian arancini stuffed with rice and bacon were the least arresting of the dishes we sampled. But our eyes widened when a whole robata-grilled squid ($11) brushed with yuzu butter made its appearance. Shortly thereafter, our stomachs duly took notice. A spicy yuzu kosho dip couldn't have made a more perfect complement to the grilled squid. Another robata standout: plush, skewered rib-eye ($9).

Even with another coif of ubiquitous microgreens, it was hard saying no to two sizable squares of chutoro ($15) sitting in a subtly sweet shiso sauce. It's easily a special I'd order again (and again). Of the nearly 20 signature rolls, the namesake "Umi" ($14) was a crunchy, riceless wonder of rolled cucumber enveloping tuna, salmon, daikon and yamagobo (pickled carrot). 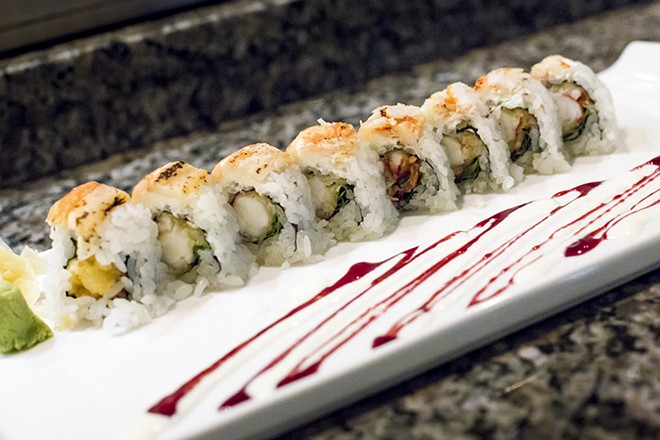 It was nice to see that desserts, all made in-house, weren't an afterthought. The mille-feuille ($6) was presented in deconstructed format with separate, but equally rich, puff pastry sticks and chocolate custard. Being a self-avowed Napoleon fanatic, I wholly endorse this unorthodox take. Panna cotta ($6) essenced with matcha, then topped with chocolate cookie and pine nut crumbles, was a valiant attempt at a fusion dessert, just not my (pardon the pun) cup of tea. A good variety of sake, be it junmai, junmai ginjo or junmai daiginjo, is offered, as well as nigori and soju-based cocktails. A focused (and interesting) wine list and a decent selection of Japanese beers pretty much guarantee imbibers will leave content.

And content is how we left, knowing that, at long last, a sushi mainstay was in the making on the Avenue.