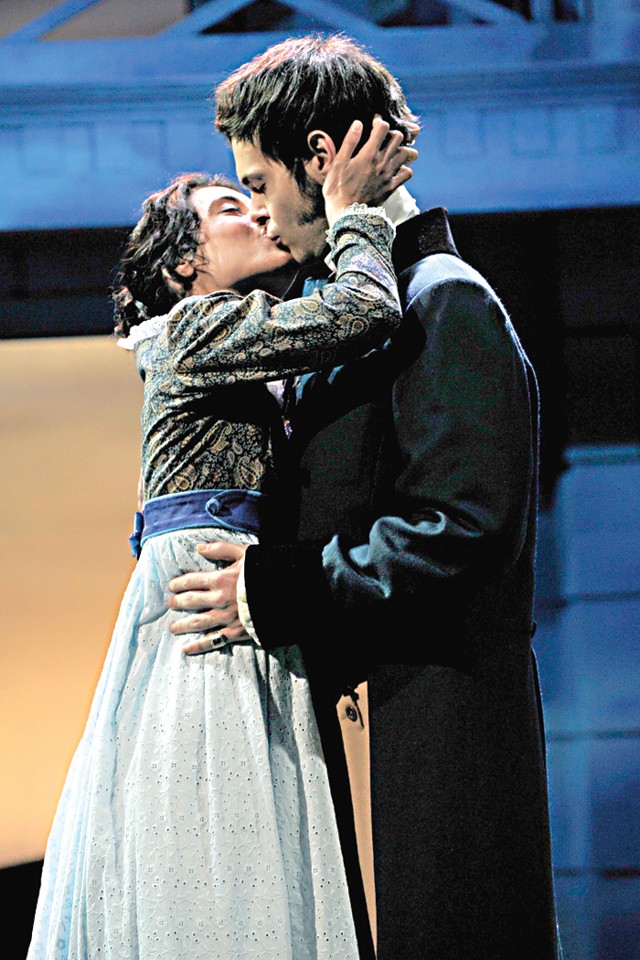 Take your pick: Pride and Prejudice, Jane Austen's 1813 work of fiction, is: an astute study of the manners, morals and motivations of the upper classes of early 19th-century England; a social satire of same; a cheesy romance novel; a revolutionary feminist tract; or a wordy tome that gathers dust on the shelf until some assistant professor in an undergrad class forces it upon complaining ?freshmen.

Perhaps because the book is a little bit of all the above, it has remained wildly popular for the past 200 years - no less so to dramatists who try to find suitable formulae for its translation to stage and screen. Jon Jory, long-time producing director of the Actors Theatre of Louisville, has fashioned a light-hearted theatrical version of the work that emphasizes its comic aspects, as well as the romantic interplay between its two love interests, the vivacious and independent heroine, Elizabeth Bennett and the proud and brooding aristocrat, Mr. Darcy.

As staged at the Orlando Shakespeare Theater by director Thomas Ouellette, Jory's adaptation is frothy and sentimental, glossing over the darker social and psychological aspects of the work to concentrate on its surface emotions and mass appeal. In essence, this account of Pride and Prejudice is like a Lifetime Channel made-for-TV-movie: pretty and plucky country ing�nue spurns hoity-toity upper-class snob, who, nonetheless enamored by said girl's pluck and beauty, learns to leave his class pride behind in pursuit of true love. She, in turn, overcomes her prejudicial notions and judgments, finally succumbing to the many charms of her erstwhile suitor. Bickering turns to affection and they both live happily ever after. Fade out.Supported by a competent cast of comic stereotypes - Anne Hering as the ditzy and overbearing Mrs. Bennett, all nerves atwitter in her aspirations to marry off her five eligible daughters; Wynn Harmon as the droll and much put-upon Mr. Bennett, who has been given the best one-line rejoinders; Michael Daly as the verbose and self-involved Mr. Collins; and Robin Olsen as the imperious and spiteful Lady Catherine De Bourgh - Michele Vazquez, who starred as Hermia in the company's recent A Midsummer Night's Dream, dishes up all the nerve and intelligence required in her role as "the most critical young lady in Hertfordshire."

Avery Clark, who also gave a robust and overtly physical performance as Lysander in Orlando Shakes' recent production of A Midsummer Night's Dream, fares somewhat less well in his interpretation of Darcy. Perhaps because Austen has given her hero little more than a stiff bearing and haughty ?condescension in the book's early chapters, Clark has found little to play and less to like in his version of the character. Only in the final scene, when his affection for Lizzy overcomes his ramrod rectitude, does Clark allow the revelation of Darcy's innate generous nature.

So, take your pick: lightweight and charming stage play with a happy ending or prolix novel about a time and place far removed from today's world