Primus imagines the oddest Oompa Loompas of them all 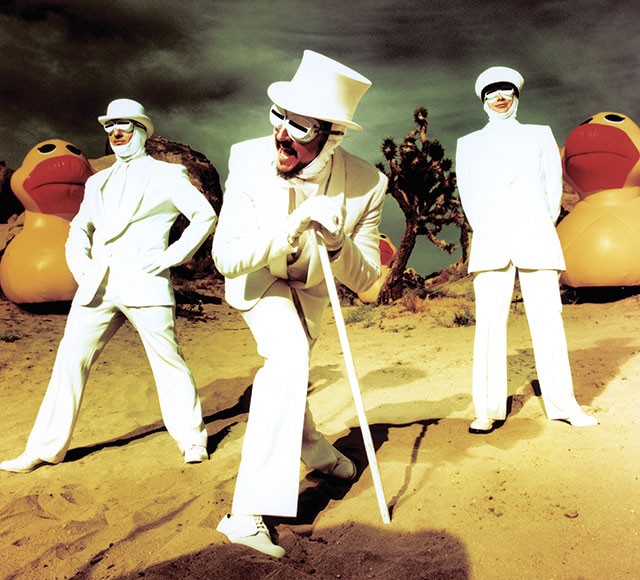 PRIMUS AND THE CHOCOLATE FACTORY

It’s arguably the darkest, most psychedelic children’s movie of all time – covered by the oddest, most idiosyncratic rock act of its generation. Primus’ take on Willy Wonka on Primus and the Chocolate Factory With the Fungi Ensemble is just what you might imagine: a circus funhouse version of the 1971 film populated with unearthly sounds and Les Claypool’s larger-than-life personality.

You know you’re in for a ride from the first moments of “Candy Man.” Clattering percussion is soon joined by a mooing horn that could still be echoing from Pink Floyd’s last visit to Pompeii. When Claypool asks who can make the sun rise, it’s in the grizzled gutter growl of Tom Waits – on an absinthe bender.

“I wanted to keep the creepiness [of the classic movie],” says Claypool during a brief break in their busy schedule. There are no half-measures with Primus. The show features multiple costume changes, audiovisual accompaniments and other unexpected stage occurrences. “We like there to be some surprises.”

They’re selling candy bars (natch), and even inserted five golden tickets among their albums entitling the winners to free admission for a lifetime. (No claimants so far.)

The idea emerged out of their annual New Year’s Eve extravaganzas. About six years ago – when 3-D movies were all the rage – Primus teamed with some friends in the entertainment industry to put on a 3-D New Year’s Eve. They turned that into a touring show for 2012-13.

“We had people throwing up in the aisles,” Claypool says. “It was great.”

Last year’s New Year’s theme was Willy Wonka. It was so much fun that they decided to record the soundtrack – in their own inimitable manner.

“It’s a dark, abstract representation of Willy Wonka from the perspective of a young boy in the early ’70s,” he says. It is, he admits, something well within their wheelhouse. “Primus has always explored colorful fantasy worlds that are a bit on the twisted side.”

The album’s highlight is perhaps “Golden Ticket,” a buoyant marching tune that sounds like the Pied Piper on a kazoo. Its overzealous pomp is its own reward, so (characteristically) odd and out-of-scale that the Cat in the Hat could live a quiet life there.

“It was the one that most sounded like a Primus song, so the key was not to go too far with that,” Claypool says.

Last year’s New Year’s Eve show and the subsequent Chocolate Factory album marked the return of longtime drummer Tim Alexander. He hadn’t recorded with the band since 1995’s Tales From the Punchbowl, four albums ago. Alexander brings something special to Primus, and that’s even truer this time, where he goes wild with odd instrumentation.

“Tim’s an amazing drummer, very creative,” Claypool says. “He has this metal cage with all manner of objects to sling, ring, bang and clang. We lock him in there, and he gets to work.”

Alexander suffered a minor heart attack between the completion of the album and the present tour, but was insistent that it not hold them back, and it hasn’t. “He’s doing great,” Claypool says. “No ill effects.”

Before they left on tour, Claypool and company were in the beginning stages of planning this year’s New Year’s extravaganza. He wasn’t offering any details, though he did express excitement for the concept. Is this a dry run for next year’s tour?

“It could be something that we do on tour,” Claypool offered cryptically. “Then again, it may not.”