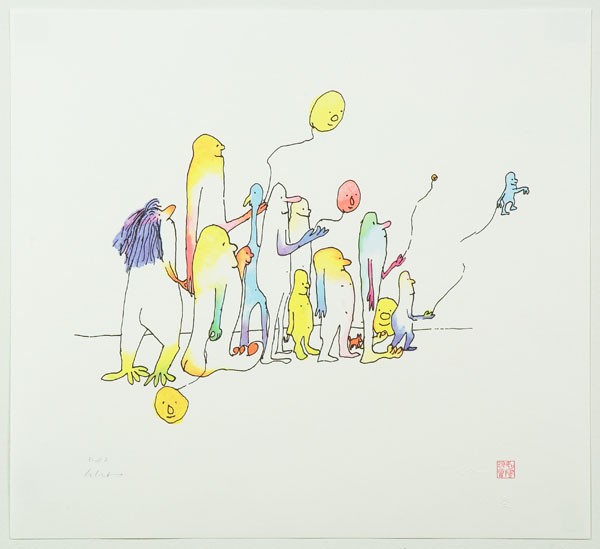 All You Need Is Love: The Artwork of John Lennon

While Beatles fans have tended to see Yoko Ono as an interloper, a commoner who married into rock royalty, art lovers know the reverse is true. Without question, Ono was a much more sophisticated and multifaceted visual artist than John Lennon. When they met, she was a celebrated citoyen of the avant-garde, while he – though more famous than she, certainly – was a former art student and compulsive doodler. Regardless of their relative levels of artistic talent, however, there are few gestures as romantic as Lennon's Bag One suite: his wedding gift to Yoko, a sweet and occasionally erotic series of drawings documenting their 1969 wedding and honeymoon (a honeymoon that doubled as a performance art piece, if you recall: The pair staged their first Bed-In to protest the war in Vietnam). If your sig, on the other hand, has never done anything quite so swoon-inducing as that, try to contain your bitterness at All You Need Is Love, a three-day exhibition of Lennon's drawings and lyrics, curated by Ono, which will be on display in Winter Park this week. Several of the Bag One images will be on view for Valentine's Day-celebrating couples to moon over, yes, but those who prefer a drop of malice in their whimsy may enjoy Lennon's earlier drawings, many of which are laced with a needling, acerbic wit.

Ono devotes much of her time and talent these days to preserving Lennon's legacy. In addition to her own art activities, she oversees constantly touring displays of his drawings, paintings and lithographs – according to a representative of the company that installs and publicizes them, 300 exhibitions since 1994. "It's suddenly become a very popular show," Ono says. "In the beginning, it wasn't at all. It was like, ‘Well, um, are you coming?'" She laughs. "But these days John's work stands on its own." This iteration comprises almost 100 items, including four "never before seen" pieces. The art will be hung in a currently empty building at the corner of Park and Comstock avenues, and proceeds from the $2 suggested donation at the door will be donated to the Orlando Union Rescue Mission's programs for homeless women and children.