On June 12, survivors of the mass shooting at the gay nightclub Pulse plan to grieve and remember the friends whose lives were stolen by a gunman.

But on June 11, some of them plan to yell and chant in downtown Orlando at a protest demanding an end to the epidemic of gun violence that cut short the hopes and dreams of 49 people two years ago.

The rally organized by Pulse survivor Brandon Wolf and several community groups comes four months after another mass shooting in Florida. In February, a shooter killed 17 students and teachers at Marjory Stoneman Douglas High School in Parkland. Students who survived the massacre started #NeverAgain, a national movement of young people advocating for a ban on semi-automatic assault weapons and tighter gun regulations to prevent another shooting. Parkland students and parents advocating for gun reform have attracted significant media attention – and the notice of politicians.

Less than a month after the Parkland shooting, the Florida Legislature passed the "Marjory Stoneman Douglas High School Public Safety Act," a $400 million measure that bans bump stocks, establishes a three-day waiting period for gun purchases, raises the minimum age to purchase a rifle from 18 to 21 and creates a program for arming certain school employees. Signed into law by Gov. Rick Scott, the bill also provides $1 million for the design and construction of a memorial.

But the same didn't happen after Pulse, notes David Moran, an activist and co-founder of the Orlando chapter of Gays Against Guns.

In the 612 days between Parkland and Pulse, no gun reforms were passed. Scott backed out of a promise to advocates that he would sign an executive order protecting LGBTQ state workers from discrimination in Florida – his office says federal anti-discrimination guidelines already exist to protect LGBTQ people. The state hasn't provided money for a Pulse memorial, either.

"It has been a somewhat difficult pill to swallow to see how people responded to Parkland activists compared to Pulse activists," Moran says. "I'm not blaming the Parkland students. But it's not like Pulse activists weren't speaking up."

Moran was one of 10 people arrested in July 2016 during a sit-in at U.S. Sen. Marco Rubio's office a month after Pulse demanding legislation for gun control, LGBTQ protections and state-sanctioned violence in communities of color. Days after getting arrested, Moran confronted Rubio at an Orlando business, telling the senator there was "blood on your hands" because of Rubio's support for gun policies pushed by the National Rifle Association. 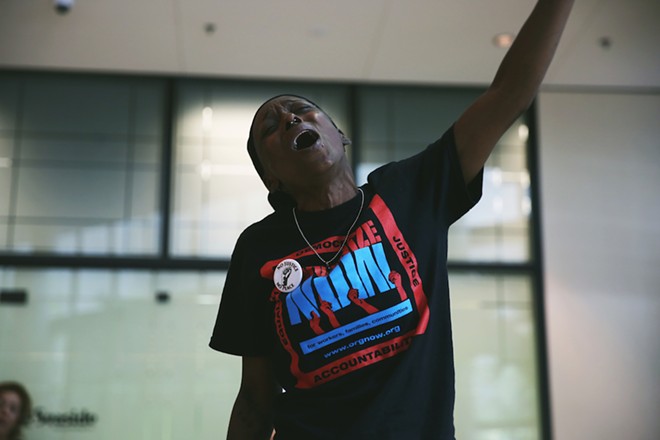 After Pulse, Ishmael Perez helped found the community organization QLatinx – the majority of the 49 victims were from Latinx and black communities around Central Florida. Perez was also at the sit-in with Moran and about 70 other protesters that July. He remembers telling others what it was like to wake up in his hometown and suddenly fear for his life because somebody took a military-grade weapon and slaughtered people in a corner of the city where they could be themselves.

"When 49 people from a marginalized community died, nothing happened," Perez says. "That was already upsetting, but then to hear that it took these teenagers being gunned down for people to say, 'Maybe we should do something now' – it's great that they finally decided to take action, but it should have been years ago, before Pulse."

The two-year mark of the Pulse massacre shouldn't just be about acts of kindness and tributes, Perez adds.

"We need structural change," he says. "We can decorate this horrible tragedy with flowers, but if we don't actually do something that'll prevent this from happening again, then we're not covering our bases."

Months after Pulse, survivor Keinon Carter says he’s still dealing with surgeries and physical therapy appointments for the injuries caused by the gunman who shot him twice. He’s spoken at gun control rallies and is involved in a survivor support group with Cpl. Omar Delgado, a former Eatonville Police officer who responded to Pulse. Carter says he still doesn’t understand the discrepancy between Pulse and Parkland.

"Everything is under Florida law, so why is there a difference?" he asks. "Because it was homosexual gathering and that was a children's gathering? You know, a life is a life – no matter who the person is."

María Jose Wright says she's a pragmatic person who tries to understand why so little was done after her 31-year-old son Jerry Wright was killed at Pulse. The state Legislature was out of session. Unlike Parkland, many victims' families lived out of town. Many survivors of the massacre struggled to stay afloat after being injured.

"The Parkland kids already knew each other because they were classmates," she says. "These 49 people never met until they were on their way to heaven. Different circumstances have given them a loud voice that Pulse didn't have."

The past two years after Pulse have been rough for Wright and her family. Jerry Wright left an irreparable hole, and sometimes his mother catches herself waiting for him to come back. But since the tragedy, Wright and her husband have worked to honor their son by becoming strong advocates for gun control in South Florida.

"For survivors, many times being able to be the voice of the one taken by gun violence who no longer has voice can be empowering, healing," she says. "Sometimes it feels like you're swimming against the current. But if by what I'm doing I can save one life, as hard as it is, there is that satisfaction of knowing I'm making sure no one forgets him."