Q&A with the masterminds behind Legends: A Haunting at Old Town

We got a chance to talk to co-creator Jim Shackelford and the haunt’s fictional undertaker, Archibald Ashdown 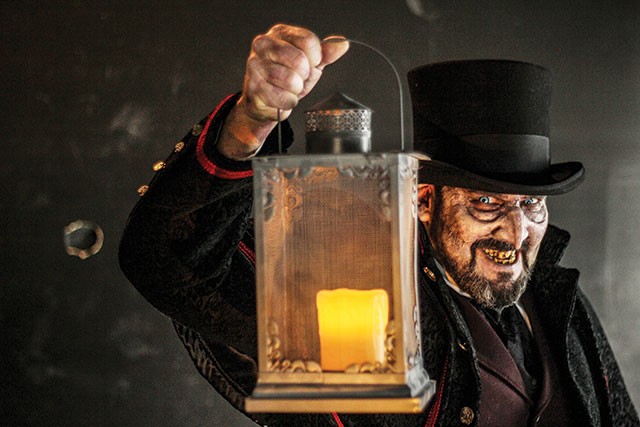 Legends: A Haunting at Old Town

Legends: A Haunting at Old Town, Orlando’s newest haunted attraction, just opened this Halloween season, and we recently had a chance to sit down with Jim Shackelford, creator and co-owner of Legends Dark Amusements, which operates the attraction, to talk about the new project. He was accompanied by Archibald Ashdown, the fictional character (played by another Legends co-owner, Dan Carro) whose creepy funeral home is the centerpiece of Legends: A Haunting at Old Town.

Orlando Weekly: What made you decide that you wanted to break into the haunted house business?
Jim Shackelford: Honestly, I started when I was about 5 or 6 years old with one of my grandmother’s best friends who started a house in her garage every year for the kids from her church. So I got the bug back then, and quickly started doing a yard haunt with my father, which evolved into my doing a really large yard haunt when I moved into my first home.
From there, it just continuously snowballed. It actually got to the point where I’d have around 2,000 to 3,000 trick-or-treaters because of the displays on the yard. People were calling their friends on their cell phones saying, “You gotta check this out!” So friends and family were saying, “You’ve got to find a way to make a living doing this.” My background is actually in interior design and architecture, so it just bled over into doing entertainment design. So the path really started when I was 5, and just continued until today. I’m in my mid-30s.

So how did you two find each other? You know, with Jim allowing you to set up your undertaking business inside of his haunt?
Archibald Ashdown: Well, we were introduced through a mutual friend named Dan Carro, who did a lot of the artwork and creation for Legends: A Haunting in Old Town. I know Dan started at Terror on Church Street years ago, and then later managed Skull Kingdom. Eventually he just introduced the two of us.
Oh, and just so you know, for every question you ask me, I’ll need to ask you some questions.

You took over the space that used to be Grimm House. How did that opportunity come along?
JS: It was actually through Dan. I understand that the previous haunt [the Haunted Grimm House] was there for around 25 years and was there when Old Town originally opened. So it closed in December of last year, and because Dan produced the Halloween event in Old Town for the last two years, he was the first person the management called to say, “Hey, the house is gone. We need a new operator and a new show here. Do you know anybody who could do it?”
I co-owned a production house [called Haunt 2013] with Jay Westerman in Dallas, and Dan had been doing freelance drawings for us at the time. So he got a hold of us and asked what we thought about running a show in Florida. We weren’t sure, went back and forth a few times with Old Town, thinking about it, wondering, “Do we really want to try and run a show from there?” Then, fast forward a few months ahead, and we’re building a home here – moved the entire company to Kissimmee and running Legends.

How long did it take you to actually construct the entire thing, from the moment you stepped on the scene?
JS: It was actually very quick for an attraction. We signed the lease at the end of February of this year and began work on it mid-to-late March. There’s a lot of new infrastructure work that you can’t see: The electrical has all been redone, there’s an all-new fire-suppression system. We gutted a lot of the space and started from scratch with the scenic, added all new special effects and animatronics. To us, it feels like we’ve been working on it for years because it’s been an intense project to work on. But everybody keeps telling me that nine months for Orlando is not a long time to turn a new attraction around.

AA: My turn! Will you be writing your own epitaph, or will we be writing one for you?

I’d really like to see what you guys come up with, so I think you could write one for me.
AA: So we’ll need a ghostwriter. Very good. Go on. Keep going.

What’s the biggest trial you’ve had setting all of this up?
JS: Honestly, it’s really been a work of passion, so it’s hard to think of one. I mean, lugging stuff up the stairs wasn’t very fun.
AA: I can tell you there have been incredibly long hours.
JS: Going home at 3 in the morning, and coming back at 10 a.m. and picking up where you left off.
AA: And many of us have families that we didn’t get to see very often in the process. Jim, this gentleman, was going back and forth from Dallas on a regular basis.
JS: I have so many flyer miles now.
AA: He wasn’t quite sure where his home was. But honestly, it’s a labor of love that you endure … or you die.
JS: That really is where the challenge has been, on a personal side. My mother calls me, and she’s like, “Why are you not calling?” I’m like, “You just don’t know the scope of what we’re doing.” So yeah, we’ve all sacrificed time with family and friends to make this happen.
AA: Are you allergic to any kind of flowers, or flower arrangements?

Umm …
AA: It doesn’t matter, you won’t be breathing anyway. Go on.

Where did you get the idea for a funeral home setting? Did you have any favorite movies or stories that contributed?
JS: This is going to sound kind of horrible, but I actually worked in a funeral home when I was finishing high school and starting college because it’s what I thought I originally wanted to do.
AA: Horrible.
JS: But death is pretty much a universal fear. People tend to be afraid of it. And something I observed working in the funeral home was how terrified people were to go in the room. While some were grieving and sad, others were just afraid. So it made me realize how strong a phobia exists with death and disease, and that sort of thing.
AA: Not only that, but all manner of phobias stem from that, too. This fear of ghosts and bodies coming back to life, just being alone with them and what could happen when you are. There are just so many terrifying ideas that come from death that it naturally lends itself to this type of thing.
JS: For a year-round show, we needed to find a theme that would be able to carry itself throughout the year. We’ve already had discussions that in three to five years, you may come back and it will be an asylum or something completely different. But we’re gonna let it run, let it be a playground, play with new ideas, and see how things progress as we move forward with it. It will be evolving. This is not a static project whatsoever, so when people come back, they should see some new things and ideas we’re toying with.
AA: New torches, ways of incapacitating people, body disposal.
JS: Hopefully the fire marshal doesn’t hear this.

It seems like there’s some serious history going on with the animatronics in the building. Can you tell me a little bit about those?
JS: We actually have a figure of a prisoner in an electric chair, and it looks like he’s being electrocuted when it goes off. There are strobes and fog and things like that. That piece is made by a company called Distortions Unlimited out of Greeley, Colo. They were also featured on Making Monsters on the Travel Channel. That specific animatronic is credited for starting the idea of vending to the haunted-attraction industry.
So that one in our window is believed to be one of the first ones sold in the industry. When we moved in, all that was left of it was just the wooden chair. The body, the motor, everything was gone. So we shipped it off to Distortions in February and they refurbished it for us, and we’re proud to have a piece of haunted attraction history on display.

Some folks argue that horror is a tough market, that it’s small and tough to access. How do you feel about that?
JS: I don’t actually hear that a lot, because the people who come to see us are horror fans. We’ve gotten a lot of excitement from Orlando about the fact that there’s a year-round haunted attraction. A big part of our cast and crew are alumni from Skull Kingdom and Terror on Church Street.
AA: Speaking of which, there are people who still to this day lament the closing of those two attractions. So if you look at the big park events like Halloween Horror Nights and Howl-O-Scream, how many people attended those events and how they’re extending their days into November, clearly it’s not a niche market or a market that’s going anywhere any time soon. To that end, we’re going to be opening a ghost tour in November, so we’re actually adding another attraction once the Halloween season ends, simply because we truly believe that people want this kind of entertainment all the time.
JS: I hear people keep saying that Orlando needs something a little darker at the end of a day of sugar, spice and everything nice at the big parks. That the adults need something a little different, and this guy, Mr. Ashdown, fits the bill.
We’re a very immersive, intimate, personal horror experience. We send a group of six people in every five minutes, and so you’re not with a bunch of other people. It’s your own show, and if you’re a horror fan, it’s like being in your own personal horror film.
It’s not just eye candy, there’s a lot of action going on.
AA: There are a lot of sick, sick people in this world and someone has to cater to them. That’s what we’re here for.