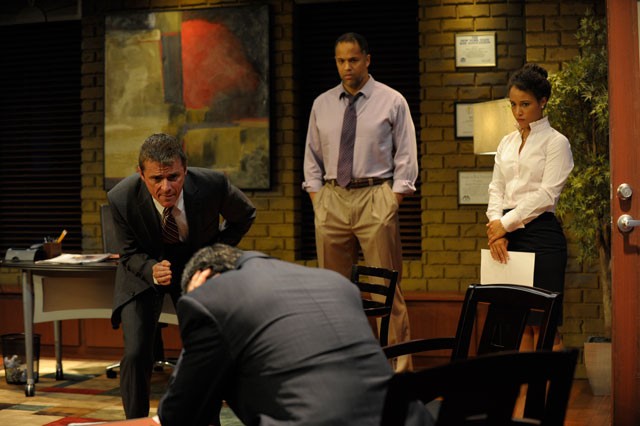 Here's the hard truth: Fifty years after the Civil Rights movement, skin color still dictates our societal perceptions and relationships. David Mamet's three-year-old, Tony award-winning play Race, playing now through Nov. 11 in an Orlando Shakespeare Theater production, explores the social constructs and expectations motivating a group of people who, for all purposes, are similar in background and education, but whose differing factor – skin color – overrules all.

The play centers on three lawyers trying to determine whether they should take a seemingly unwinnable case: defending a rich white man, Charles Strickland (played by Jim Ireland) accused of raping a black woman. The attorneys agonize over how the jury might sympathize with the woman and how Strickland's race is automatically a strike against them. Through an unexpected turn, they find themselves the attorneys of note in the court's system, and then the real turmoil begins.

To complicate matters, one attorney is white (Richard B. Watson as Jack Lawson), while two are black (erstwhile soap star Keith Hamilton Cobb as Henry Brown and Stella Heath as Susan – Mamet didn't see fit to give this character a last name). The play eventually exposes not just how a jury might prejudge their client because of his race, but how they judge each other – whether inherent feelings of guilt and shame are present simply because one is white or black, and how those feelings manifest in social interactions.

Watson depicts the white attorney as forceful, fast-talking and slightly Southern, though it wasn't clear whether the drawl was a characterization or Watson's natural lilt. (Either way, it worked.) Lawson is intense, larger than life and quick to temper – a perfect foil for Cobb's even-keeled Henry Brown. Heath portrays junior attorney Susan as dignified and overly austere – because she's not only black, she's a woman, and thus has more to prove than anyone in this group.

The set brilliantly transformed Lowndes' Goldman Theater into a New York office building, making the usually intimate setting seem far larger than its square footage. It was so realistic that, rather than marveling at the craftsmanship, the audience could suspend disbelief and allow themselves to delve deeper into the world of the play. That being said, the lines were delivered at such a pace that it was impossible to let your eyes wander, for fear that you'd miss a new piece of evidence or a cleverly placed one-liner giving insight into the subtext of the dialogue.

The actors, all classically trained, seemed more suited for the elegance of Macbeth than the grit of Mamet, exuding a stage presence more regal than raw. Because of this, some lines and exchanges felt forced, and the message rang truer than the delivery at some points. But there were also wonderful moments in which the bombast and sensationalism of loud racial epithets ceased and the vulnerability of the characters was revealed.

The play's jarring conclusion leaves much for patrons to discuss after leaving the theater, which was surely Mamet's aim: to force us to consider how race makes itself known in our lives and how uncomfortable that makes us. Race opens up the discovery of hidden tensions and ingrained emotion that many of us think we're above in this supposedly post-racial world. Though our intentions are to see beyond skin color, sometimes the hard truth is that it's just not possible.