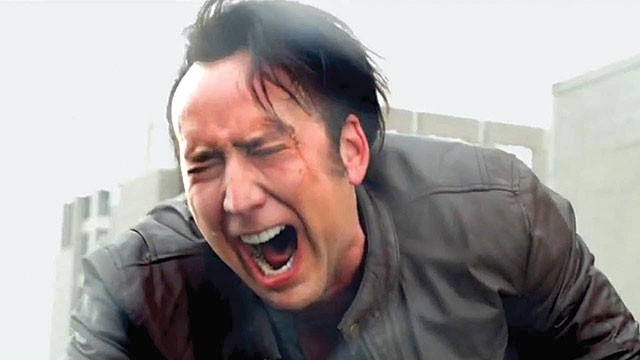 If Nicolas Cage is in on the joke that his career has become, as he told the Guardian last summer, you’d have to ask yourself, is there a point to keeping it up? When the butt of the joke (no matter how lovingly it’s told or how funny the meme) becomes aware, doesn’t it stop being funny?

It’s a thought that may have crossed Cage’s mind when he signed on to star in Rage, a revenge film that somewhat conspicuously lacks both the ham and the cheese that we’ve come to expect in the landmark cinema of Nic Cage.

In it, Cage plays Paul Maguire, a serious guy who has moved on from his days as mobster in the O’Connell crew and gone on to the more lucrative field of urban land development after promising his wife on her deathbed to always be there for their daughter, Caitlin (Aubrey Peeples).

Despite his violent past, he’s stuck to his word and has settled down with a new wife, Vanessa (Rachel Nichols). He has become a doting father that picks Caitlin up from school everyday, something that has become a problem, as she has turned 17 and wants her freedom.

All those promises go out the window when Caitlin is taken at gunpoint one night during a home invasion. In his mad panic, Paul runs through every evil deed from his past to figure out why someone would do this to him, finally turning to the only people he knows that can help: his old mob buddies, Kane (Max Ryan) and Danny (Michael McGrady).

They have a particular set of skills, you see.

If the plot sounds familiar, that’s because it is. Remember Taken, starring Liam Neeson? The comparison to Taken doesn’t go much beyond the surface, though. While every moment of the Liam Neeson thriller is exciting or charming, Rage only has those qualities in spurts that are more comparable to Bullet to the Head.

The biggest problem isn’t that Cage is bad in his role, it’s that he’s not bad at all. The frustrating thing about his career is that he can be so good when the mood strikes him. Leaving Las Vegas (which he won an Oscar for), The Family Man, the criminally underrated Bringing Out the Dead and the entire block of films between Adaptation and The Weather Man give a glimpse at a Cage who isn’t a total ham – or who’s at least being a ham for a higher purpose.

But here, playing Paul in a mad panic over his missing daughter, Cage never really goes into a mad panic as an actor. He stays mostly even-keeled, even as his world falls to pieces around him. I don’t know if that means anything for Cage’s career going forward. If it does, it needs to come attached to a better script. If it doesn’t, there are thousands waiting on Meme Generator for his next gift to the world.