Raising the bar: Five Orlando watering holes where form is just as important as function 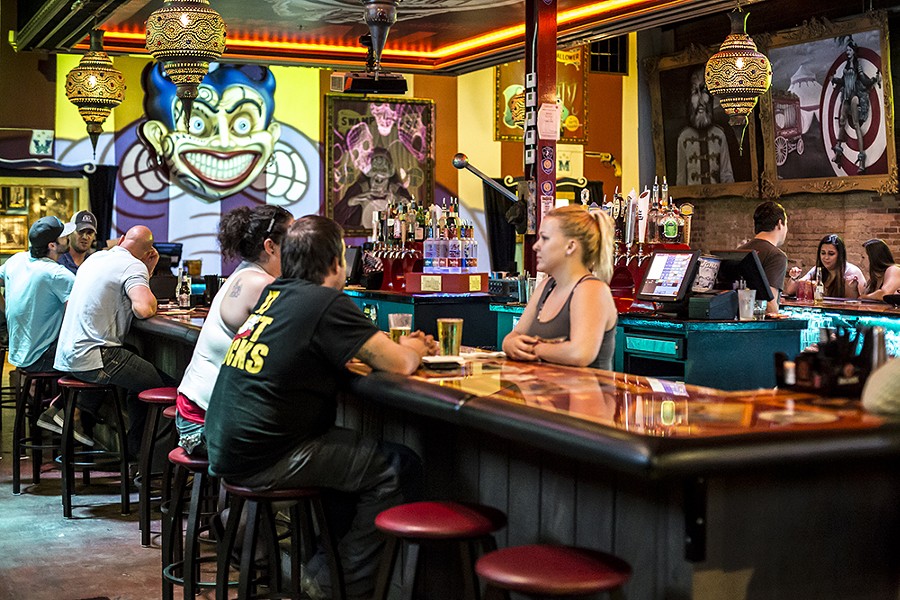 
With seven bars lining its brick-paved pedestrian walkway, it’s no surprise Wall Street Plaza is known as downtown Orlando’s party central – particularly on the weekends, when 20somethings gravitate to the epic block parties and liquor-infused events that transform the space from quirky daytime lunch spot or happy-hour hang to full-tilt nightlife hotspot.

But take a moment to look more closely at the details in any of Wall Street Plaza’s bars and you’ll realize that the space is more than just the sum of its parties, as events and marketing director Paul Emery points out.

Each bar in the plaza is elaborately themed – Wall Street Plaza owner Joel Springman is what Emery calls, “not an American picker, but an international picker,” who travels the world finding unique objects and concepts to bring back to the bars. Sideshow, for example, is reminiscent of a 1930s carnival. From the giant Alexander the Crystal Seer mural above the bar to the giant grinning clown face that greets visitors coming in from Orange Avenue to the sideshow-themed paintings on the walls (commissions completed by Orlando artist Maureen Hudas), the space is full of eye candy, oddities and Easter eggs for patrons. Don’t miss the fun house mirrors in the bathrooms and the surreal projection mapping that transforms the space after dark. “With the projection mapping, we tried to make it so there are so many scenes that you would hopefully never see the same thing twice,” Emery says. “So maybe you’d be sitting there at the bar with your buddy and say, ‘Hey, did you see that?’”

Some of the spaces also have some interesting lore that predates downtown’s nightlife scene – according to Emery, rumor has it that the Henhouse, which is a tiny bordello-themed cocktail bar, used to be a city jail. The space that is now Hooch was once a bus stop, he says, where Jack Kerouac allegedly stopped while writing On the Road.

Wall Street Plaza started out as just two bars on Orange Avenue, One Eyed Jack’s and the Loaded Hog, back in 1995. But over time, it grew and evolved. Jack’s and the Hog (which used to have a giant pig that, “blew confetti out of its butt,” Emery says) have been replaced by Sideshow, and three newer bars, Hooch, Shine and the Henhouse, now occupy spots that used to house beloved Orlando counterculture spots Yab Yum, the Kit Kat Club and the Globe restaurant. Those spaces were purchased by Springman in 2001 and transformed over time.

Emery says Wall Street’s owners still have some of the old signage from those spaces – down the road, he says, they’re thinking about installing them as an homage to the space’s storied past.

“We are locally owned and operated,” he says. “We are not a theme park, and we care about the environment we live in. We just want to offer interesting places for people to sit, have a drink and some food and just enjoy Orlando.”