Raising the bar: Five Orlando watering holes where form is just as important as function

Exceeding expectations: The Boathouse and the Shark Bar at T-Rex Cafe 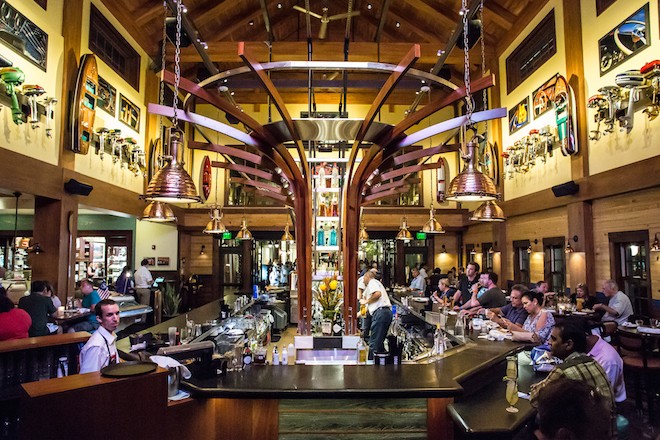 If you haven’t had a reason to visit Downtown Disney – soon to be rebranded Disney Springs – lately, there’s a new bar/eatery located on the lagoon that gives locals a good reason to go back. It’s called the Boathouse, and its tagline – “great food, waterfront dining, dream boats” – is spot on.

Owned by Schussler Creative, the Minnesota-based branding innovators behind Downtown Disney’s T-Rex Cafe and Rainforest Cafe (as well as the Hot Dog Hall of Fame at Universal CityWalk), the Boathouse is stunning in its attention to detail – the interior and exterior flow together seamlessly (as Schussler Creative creator/CEO Steven Schussler points out, you can see the water from the moment you walk into the bar), and while there’s something new to look at anywhere you let your eye fall, the space never feels cluttered or chaotic. That, Schussler says, is by design. 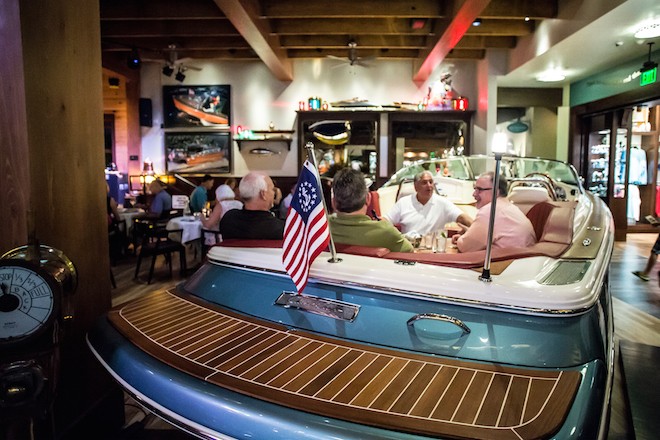 “We build everything around the five senses,” he says, noting that from the sound to the lighting to the colors and materials chosen to design the bars, the goal is to create an environment that’s exciting, comfortable and interesting to look at, but also soothing. In the Boathouse, that means polished vintage boat motors mounted overhead, carefully selected nautical-themed art, graceful architectural elements that mimic the hull of a ship. Outside, a curated fleet of vintage boats (the dream boats from the tagline) line up along the docks, which guests are welcome to wander so they can drool over the rare collection that includes a 1930 Chris-Craft Runabout, a 1966 Cir-Craft Floating Funster and a 1958 Sadaucher Unlimited Hydroplane. 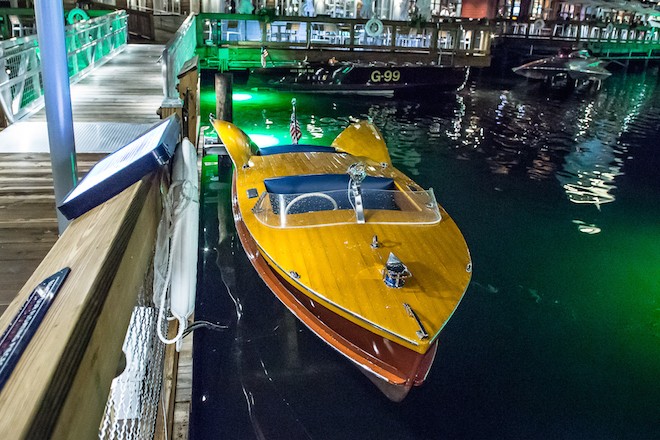 “I call these boats pieces of floating artwork,” Schussler says. “I wanted to continue with the decor we had inside on the outside. We tried to do something that no one else has done.”

At the Shark Bar inside the T-Rex Cafe, which probably attracts more extended families with kids (drawn, no doubt, by the animatronic dinosaurs and mammoths that roar and crane their necks at diners) than single people headed out for drinks, the bar is neither childish nor cheesy – rather, it’s stunning and graceful, with its massive saltwater fish tanks tucked into the arms of a giant octopus.

Once seated at the bar, it’s actually surprising how sophisticated and comfortable it feels. Again, that’s by design. Schussler says the water plays a big role in making the bar feel like a retreat. “You have that bar made out of that incredible glass with a blue tinge,” he says. “It’s soothing and it’s comforting to the brain. There’s a lot of psychological aspects that go into it, besides just design.”

And that philosophy extends to people of all ages who enter any of his properties. “It’s important to us that someone who is 6 years old is happy and feels just as comfortable sitting at the bar as an adult,” he says – an important point for a bar/restaurant located in a highly trafficked tourist spot. “I’ve never been to the Boathouse, or the T-Rex, where you couldn’t speak to anyone at the bar, or it wasn’t inviting for anyone of any age. We take into consideration all demographic profiles. It’s that kind of appeal that nobody else addresses. I can’t tell you how many bars I go into and it’s just uncomfortable for any demographic. I just can’t imagine designing something that’s not appealing to everyone.”