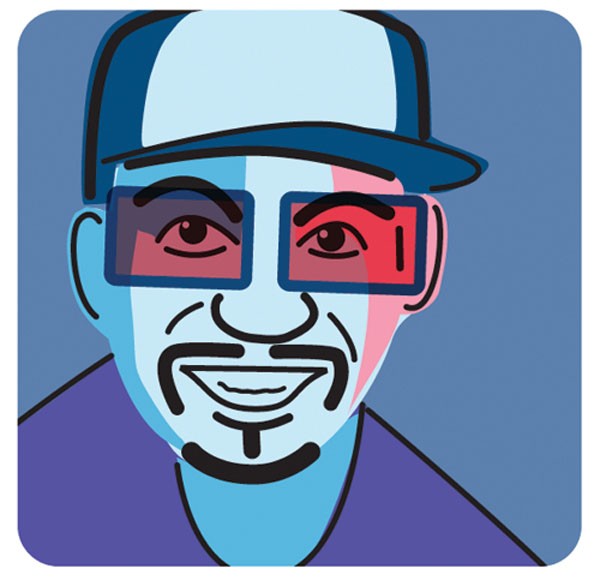 Before Daniel Dumile donned a mask and became MF Doom. Before Kool Keith became the extraterrestrial time-traveling gynecologist Dr. Octagon. Before OutKast transformed Hotlanta into an ATLien land. Before producers and emcees took hip-hop production and lyrics way, way, way into the unknown. Hell, before Michael Bay required a team of computer-generated special effects specialists to turn the detritus of shiny modern technology into robotic aliens, Rammellzee was inventing the future through the power of his bottomless imagination in New York. There will be imitators, there will be admirers, there will be those who are inspired by, but there will never, ever be another.

The man who became Rammellzee was born in 1960 and grew up in Far Rockaway, Queens. In interviews and Greg Tate’s definitive 2004 Wired magazine profile, he says he started bombing trains with graffiti art in 1974, and eventually met up with other now legendary graf and street artists of the time, an NYC era that birthed what became known as hip-hop. And he was right there. That’s Rammellzee just killing it on the microphone while waving a sawed-off shotgun in the air in 1983’s Wild Style. That’s him delivering the nasally “gangsta duck” rhymes in the theme music to 1983’s Style Wars documentary. The 12-inch single of that song, 1983’s “Beat Bop,” became one of hip-hop’s sacred objects. Credited to Rammellzee and K-Rob and featuring a cover designed by Jean-Michel Basquiat, “Beat Bop” delivers some 10 minutes of meandering vocal excursions over a strolling, electro-funk background that’s less backing-beat pulse than the outer-space colloid the emcees float through.

Rammellzee was no hip-hop Zelig, though, hanging around at the time underground art moved from the streets into galleries. He had his own thoughts, ideas and pursuits, which he meticulously worked on, figured out and articulated into a unifying metaphysical philosophy-theory called Gothic Futurism. To Rammellzee, letters were weapons, mystically empowered by 16th century monks, and graf writers were trying to liberate their power from a constricting alphabet. If you think that sounds a little wonky, take it from the man himself: “Knowledge knowledges knowledge; the elevation of WILD STYLE-knowledge is concluded as a SYMBOL DESTROYER, ARMOURED, MEDIEVAL MECHANISM. This formation shall be known as IKONOKLAST PANZERISM: R.O.K.: GOTHIC FUTURISM, THIS IS WILD-STYLE CORRECTED.” That’s merely one thought in his “Ionic Treatise Gothic Futurism Assassin Knowledges of the Remanipulated Square Points” at www.gothicfuturism.com.

According to mainstream obituaries, Rammellzee lived in an apartment in Tribeca for roughly 30 years, where he continued making art and refining his thoughts. He shows up in – and practically steals – Dave Tompkins’ indispensable book How to Wreck a Nice Beach: The Vocoder From World War II to Hip-Hop, the Machine Speaks from earlier this year. Since he passed away from illness on June 28, the web overflows with sincere appreciation and beatific mystification – all of which is worth seeking out – for the man who only walked among us for 49 years. May our consciousnesses all eventually transformigratevolve so that we might hear his word.