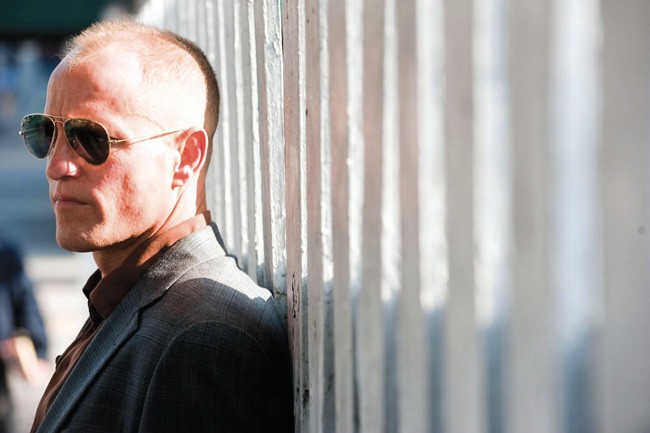 I lived for a time in the post-scandal Rampart section of downtown L.A., and while I regard that period as a crucial one, I wasn’t looking forward to revisiting it so soon. Lucky for me, though it’s a small detriment to the movie, Rampart isn’t terribly concerned with its titular district or the microcosmic geopolitics of its culturally diverse people.

Director and co-writer Oren Moverman instead trains his gritty gaze on one dirty cop: David Douglas Brown, a seething, chain-smoking, possibly racist and bigoted, certainly short-tempered matchstick of a man played by Woody Harrelson, who has become something like Moverman’s muse. (The two worked together wonderfully on 2009’s The Messenger.)

The movie finds Brown in a kind of procedural purgatory; he’s nicknamed “Date Rape” by his colleagues thanks to an earlier incident in which Brown premeditatedly murdered a man accused of a particularly heinous crime. He’s separated from a pair of sisters – he was married and had a daughter with each of them at different times, so it’s not incest, he assures one of his kids – his department is under heavy fire for, well, being the LAPD in the ’90s, and he’s become ever more paranoid. He’s also well-spoken and well-educated, which only makes his personal, twisted means of justification all the more dangerous.

A series of events – he savagely beats a driver who hit his vehicle then attacked him, it’s caught on videotape and then Brown ends up shooting a masked robber that he had the jump on – leads to an Internal Affairs disaster. Once again, he’s forced to explain his self-assuredly noble actions to bureaucrats he feels are beneath him, including Sigourney Weaver as an assistant D.A., an I.A. investigator (Ice Cube), a defense attorney (Robin Wright) and a bevy of highly recognizable character actors (Steve Buscemi, Ned Beatty, Ben Foster, also a producer here), all of whom signal their characters’ non-importance simply by way of their fame.

The same measured calculation that went into casting big actors for small roles to keep the attention on Harrelson goes into many choices throughout Rampart, and though the effect can be frustrating, it feels correct. The bad-boy cop effortlessly sleeping his way through every bar in town trope became tired, for me, by the second season of The Wire, but Moverman is careful to show how Brown does it – there’s something demonic in the way he talks to these women that explains how he controls others around him, as well.

And though I would’ve loved to see MacArthur Park portrayed, warts-and-all, for its danger as well as its cultural liveliness, that critique is instantly pacified by the involvement of Moverman’s co-writer, James Ellroy, the L.A. neo-noirist who has forgotten more about the area than I’ll ever know.

All of which says that Rampart was created with a specific goal in mind: To watch a man spiral downward, and that much we get. Because of his actions, his terms no longer apply – not to his relationships, his family, not even to his downfall. Brown can’t even talk his way around a plea deal at one point. His options have been exhausted, and when he tells his heartbroken daughters, “There’s no way out” from the hand that’s been dealt them, it’s the first truthful thing he’s likely ever told them.