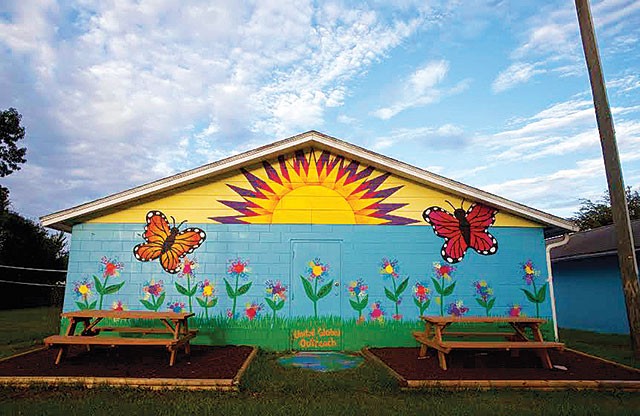 Timothy McKinney says it was four years ago that he first started thinking about Bithlo. Like a lot of people in Orange County, McKinney says, he knew Bithlo, an unincorporated town located just outside of East Orlando, primarily as the butt of offhanded jokes. Bithlo happens to be located along State Road 50, just before the town of Christmas, and, at the time, it was one of the worst parts of Orange County. He says he wanted to find out for himself why people liked to call it “the nightmare before Christmas.”

What he found was distressing: “The water there is not clean, it’s toxic, with cancer-causing chemicals,” he says. “A whole community is living in trailers, many of them 30, 40, 50 years old. There’s literally no infrastructure. No sidewalks, no buses went there at the time. There was no doctor in the community at all.”

It was, he says, a town that had been forgotten – so much so that most people were completely oblivious to the extreme poverty in Bithlo, which is (somewhat ironically) located in the same county commission district as Winter Park. Once an incorporated town, economic hardship bankrupted Bithlo in 1929, and attempts to revitalize the government there failed. In 1977, the state Legislature abolished it for good, making it an unincorporated part of Orange County, which promptly ignored it.

Now, after years of neglect, things are slowly changing in Bithlo, thanks in large part to United Global Outreach, the nonprofit organization McKinney founded to raise the town out of its decades-long depression. Just last week, the advisory board for United Global Outreach announced during a meeting that it’s had so much success bringing services, infrastructure, volunteers and attention to Bithlo that it’s ready to branch out to other struggling communities.

In 2009, United Global Outreach volunteers started out with a door-knocking campaign to ask Bithlo residents what their biggest challenges were. Some were obvious, McKinney says – access to clean water, public transportation, education and health care – while others, like a sense of empowerment, hope for the future and the right to live in a safer environment, were far more subtle. United Global Outreach put together a program that focused on seven core areas that McKinney thought needed to be addressed first: environment, housing, transportation, health care, education, basic needs and sense of community.

United Global Outreach quickly determined that it wasn’t so much money that it needed to succeed – rather, it needed cooperation and coordination. It partnered with churches, Rotary clubs, medical professionals and community organizations to hold weekly community suppers and outreach events. It invited mission workers from various churches to volunteer their time, and it asked medical professionals to offer check-ups, eye exams and dental cleanings to those who needed them most. In 2010, United Global Outreach even opened a little K-3 school for the community to help its most at-risk students succeed.

Today that school, Orange County Academy, is a K-9 with 70 students. Lynx has re-established bus service to the town, which also now has its own community garden and library. A mobile dental clinic and community health center operate in Bithlo. Florida Hospital, student groups from the University of Central Florida and more than 65 businesses and organizations have partnered with United Global Outreach in Bithlo. United Global Outreach has been purchasing land around a little group of buildings it owns in Bithlo and hopes to expand on what it calls the Transformation Village.

“It will be the town center in Bithlo, eventually,” McKinney says. “It will have a coffee shop, a community center, a community school, an aquaponics garden.”

McKinney says the Transformation Village – which consists of some concrete block buildings painted with bright murals, a playground and a fire-engine-red Victorian that houses the library – is not just for Bithlo. He says it’s also a model for what can happen in other Central Florida communities. Soon, he says, the organization will likely begin to work in South Apopka, where three nuns – Sisters Cathy Gorman, Gail Grimes and Ann Kendrick – founded the Hope Community Center to help the area’s working poor. McKinney says that despite a lot of effort and resources, there has yet to be “fundamental transformation” in Apopka. He says he thinks part of the problem is that everybody is doing their own thing to help, but they aren’t doing it in a coordinated way. United Global Outreach attributes a great deal of its success in Bithlo to its partnerships. In addition to Apopka, he hopes to see the program roll out in Eatonville, and eventually perhaps Azalea Park and Ivey Lane.

One significant difference between the places United Global Outreach is targeting next and where it started in Bithlo, though, is that these communities already have things Bithlo was lacking: functioning infrastructure, health services, transportation and intact local governments. McKinney says they’re going to have to step somewhat lightly to make sure they get buy-in, not pushback, from these communities, which naturally have developed their own way of doing things. However, McKinney says, the bottom line is that every community needs some of those basic things they started with in Bithlo – and he knows where to go to find the people who are thirsting for them.

“We don’t want to roll in and invade the community,” McKinney says. “We will go in, like we did in Bithlo, and start doing things not just with the community organizations and the government, but with the little old lady who sits on her porch. We’ll really get into the fabric of the community and find out what the dots are that need to be connected.”