No longer trucked into town weekly, Rob Nelson's grilled and smoked meats are worth the drive to Ocoee. 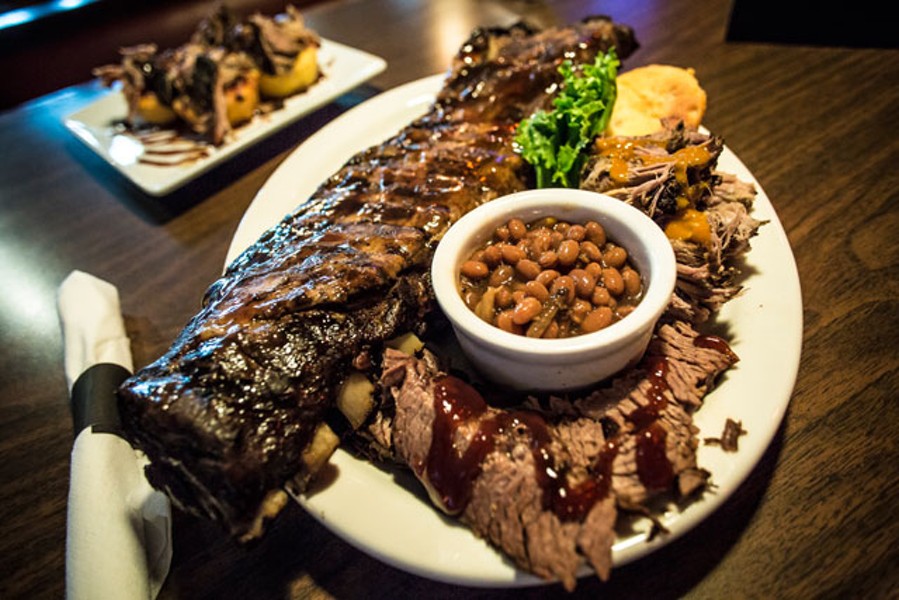 Rob Nelson was right there with his Red Eye BBQ truck when the whole comestible conveyance craze hit the city way back in 2010. But just as he was garnering a loyal following, this savant of smoking up and left the Sunshine State in the summer of 2011 to ply his 'cueing skills in Hawaii – only to return to Orlando one year later. Having sold the truck to the Gastro-Truck gals prior to leaving for the Big Island, Nelson had his sights set on the immobile side of food purveyance: specifically, the Ocoee space that once housed Matthew's Steaks and More.

Save for a few minor changes to the restaurant's decor, not much has changed since its days as a German steakhouse. Even our server's mien had a familiar air. After seating us at a high-top near the stage where a songstress purred, we learned that the cordial chap was none other than Matthew Winter himself, of Matthew's Steaks and More. Evidently, he sold the longstanding beefhaus to Nelson and agreed to stay on for a period of six months to assist him with the transition. So it was hardly surprising to see steaks find their way onto Red Eye's menu; but so do flatbreads, soups, salads, seafood and Nelson's specialty barbecue.

And therein lies the rub (pardon the pun): Red Eye wants to be all things to everyone – sports bar, smokehouse, steakhouse and family-friendly restaurant all rolled into one. But Nelson appears to be making it work. In fact, the place was packed on this Saturday night, and everyone from seniors to children to lovey-dovey 30-somethings seemed to be enjoying themselves. Sure, the live music (15-year-old Jewel-in-the-making Caitlin Dirkes) had something to do with it, but so did dishes like the succulent 15-ounce ribeye ($22), a special for the evening that Matthew himself endorsed. Grilled over oak-wood coals, the ribeye was perfectly rendered, though the accompanying baked potato was a bit on the small side. The steak came with a cornbread muffin that drew our praise, but those craving Nelson's signature food truck favorite, the Red Eye muffin (a cornbread muffin stuffed with pulled pork and drizzled with honey and barbecue sauce) may have to consider starting a petition.

As we feasted on the robustly smoky brisket ($14), Nelson popped by to inform us that he serves a Snake River Farms wagyu brisket every Monday – a revelation that, admittedly, put a bit of a damper on our indulgence. No matter; we found ourselves enjoying the leftover brisket in sandwiches the following day.

The four teriyaki-glazed jumbo grilled wings ($10) that kicked off our meal were big in size, flavor and stickiness. If you're angling for a less filling start, the mahi-mahi fish dip ($9), with its canned-tuna consistency, is not the place to look, and a heavy-handed use of pepper marred an otherwise hearty cup of crab-and-corn chowder ($4), but those were the lone faults of the evening – that and the fact that the cupcakes hand-fashioned by the Darland Bakery in downtown Orlando, a business run by Nelson's parents, were all gone. So we ended with the bananas Foster for two ($9) and listened to Dirkes belt out the Cranberries' "Linger."

As we exited, still tasting the lasting notes of smoke on our palates, we waved goodbye to the space's former proprietor and agreed that "Linger" was an all-too-fitting tune.