Reeling in the meals 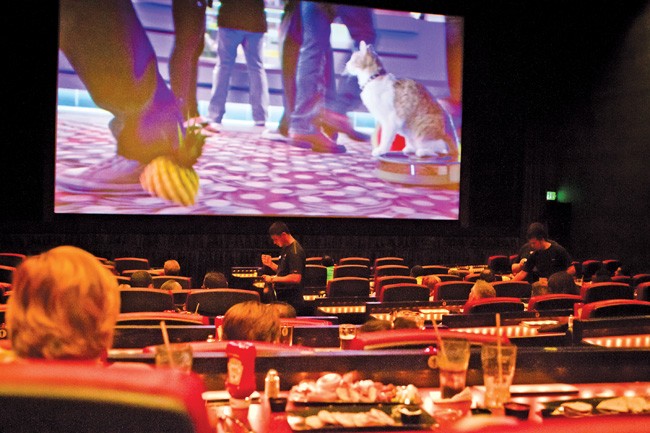 We’re no strangers to the meal at a movie concept. We’ve been regular supporters of the Enzian, and we’ve even caught a flick or two at the Aloma Cinema Grill over the years – so why, pray tell, would we venture all the way down to the AMC theaters in Downtown Disney to watch Ryan Gosling and Steve Carell in Crazy, Stupid, Love and nosh on french fries? Well, for one, the screen. It’s big. Two, the red leather seats. They’re also big. Three, the theater. Yes, it’s big, but it’s also gleaming, brand-spankin’-new. No offense, Enzian and Aloma Cinema Grill, but to quote Gosling, “the bags under your eyes look like Hugh Hefner’s ball sack.” Hey, there’s no place I’d rather see a festival-circuit film than in the Enzian’s charmingly weathered screening room, but there’s something to be said for AMC’s Fork & Screen concept: eating dinner and watching a film on the whiz-bang big(ger) screen.

The six specially outfitted Fork & Screen theaters (Nos. 19-24) at the AMC Downtown Disney 24 are all equipped with plush reclining seats, dual footrests and lighted tables with a call button. Our theater had 100 seats in a box seating configuration, which allowed for a bit of privacy as well. If the menu choices, a B-movie selection of bar food, matched the digs, we’d be likely to pay the $13 ticket price more often.

Undeterred by possible mediocrity, we perused the bill of fare in search of something remotely interesting, pressed the call button, placed our order, then took in the pre-movie entertainment. No, not the previews: watching servers amble up and down the ramps, doing their best to hold steady large trays of food and drink. Performing that balancing act when the lights dim has to be somewhat challenging – a truth that became evident midway through the film, when our server dropped a glass of water on the filmgoer seated in front of us. Good thing it wasn’t beer. It was an unfortunate accident, but moments like this can’t be that uncommon.

As the previews aired amid all the clink and chatter, we sampled tepid Parmesan fries ($6.99), a signature item, while awaiting our drink order, which they initially got wrong. Side note: It would’ve been nice if the cup holders were designed to fit pint glasses. Side note No. 2: The seats are designed more for reclining and watching than they are for leaning and eating. No matter, our drinks arrived in time to enjoy the passing-grade margherita pizzetta ($9.99) and, overall, we were pleased with the timing and pacing of the service. Our entrees arrived just as the main feature commenced, but biting into greasy smoked-brisket quesadillas ($10.99) didn’t exactly enhance the movie-going experience. The country-fried steak with house-made gravy ($11.99) was properly crispy, but plating it atop mushy mashed potatoes negated the snappiness in a matter of minutes.

We chose to end our meal with a slab of angel food cake ($6.49); it’s the only dessert made on the premises, but, like the ending of our movie, hardly noteworthy. Rather, the evening’s most poignant moment occurred a half-hour into the film when Gosling, in an effort to elevate Carell’s sense of taste and sophistication, instructs him to “be better than the Gap.”