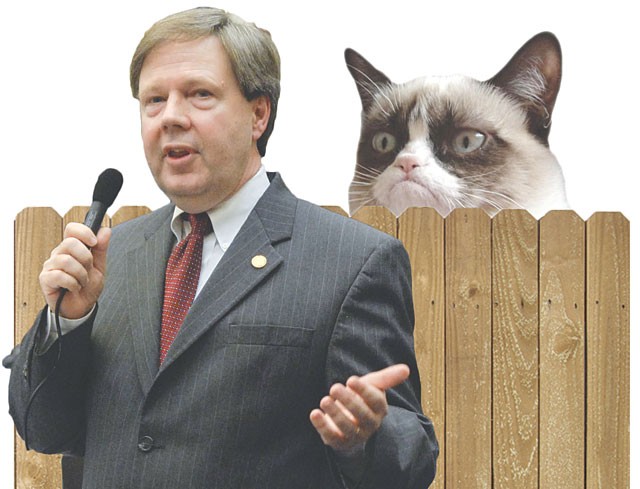 Guess what! Our favorite cuddly pro-life, super-Christian fallen legislator, Scott Plakon, filed his paperwork to make another go at Tallahassee on Jan. 2. You'll recall that Plakon went down in flames after an attempted Sandusk-ing of opponent (now state Rep.) Karen Castor Dentel in November. Well, now Plakon says he's ready to "throw his head back in" the race, only this time running in the highly conservative Florida House District 29 he granted bestie (and failed future House Speaker) Chris Dorworth two months ago. It is the district he's called home for 30 years, he says, and even people at his local Chinese restaurant are behind the idea! Still, he'll have to face off with newbie state Rep. Mike Clelland, D-Lake Mary, who doesn't even have a record to run against yet.

"This will be an election about ideas and records," he says. "I do think that my record in the legislature is well-suited to that district."

Plakon expects to launch the whole phoenix-from-the-ashes campaign some time in March with your typical fundraisers and conservative donor calls. As for the loss last year, he says he felt some kind of martyred "peace" about the whole thing; also, these next two years are the last he will have with his high-school daughter before she leaves for college, making him and his wife empty-nesters. In other words, he meant to do that.

One thing he definitely did mean to do was pass the stalking legislation he got behind last year, a legacy, he says, that falls in line with his divine plan.

"If I never serve in the legislature again, there's going to be hundreds of women running around the planet that literally could have been brutally killed had that bill not passed," he says. "I think that is a really cool thing to be able to be part of."