A Jazz Age gin classic re-envisioned as a summertime slush 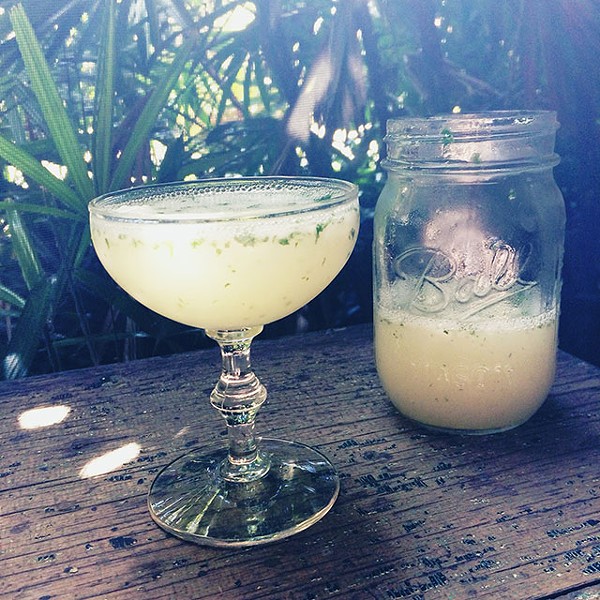 The Southside cocktail rubbed me wrong from the beginning. It’s got a “colorful” history, sure: Various conflicting stories have it originating in the New York speakeasy that later became the “21” Club; at the Southside Sportsmen’s Club, a snooty Long Island yacht and hunt club; or in the thick of Chicago’s Prohibition-era liquor wars, when turf was split between gangsters on the North and South sides (a split that’s fundamental to this day, mostly expressed now as animus between White Sox fans and Cubs fans). But it’s such a boring drink: gin, lemon, sugar, mint, yawn. Wherever it came from, the citrus-sugar-mint combo was obviously just a ploy to cover up the taste of bathtub gin, without any other real interest.

Due to the current craft-cocktail fascination with all things Jazz Age, however, the Southside is having a resurgence. (Also, probably, because it’s easy and cheap to make or to tweak.) After Orlando Weekly’s own ’20s-themed party, the Great Orlando Mixer, last month, I got my hands on a bottle of a new spirit from one of the sponsors. Bombay Sapphire East is a brand extension that adds lemongrass and black peppercorns to the gin’s juniper-forward nose, giving things an Asian vibe, which got me thinking: Instead of a Southside, why not a Southeast Asian (or SEA)-side? Even with a more exciting gin, though, the cocktail still bored me.

Then I learned a nifty new (to me) trick: Did you know that the blade base of most blender pitchers will screw onto a standard Mason jar? Mind = blown. Portable slushies, smoothies and soups from now on without having to wash the damn blender! Suddenly a vista of easy summertime blender drinks opened up before me and I thought:

A pint of lemon sorbet, a hit of my trusty bitter Cynar to cut the sweetness of said sorbet, a bit of tinkering and I had found my new favorite summer drink. You can serve it in a coupe glass if you like, or just drink it straight from the Mason jar.

Place everything in a Mason jar (if you’re using the trick) or blender. If blender, put mint on the bottom; if Mason jar, put mint on top – you want it in the closest contact with the blades. Pulse on high setting until you have a thick slush. Serve in a coupe glass if you’re fancy, or just drink straight from the jar.

* Note: Cynar can be hard to find in Orlando. Try Averna Amaro or Fernet-Branca if you don’t have Cynar, but use a touch less.