Remix: A fresh take on the Dark & Stormy. 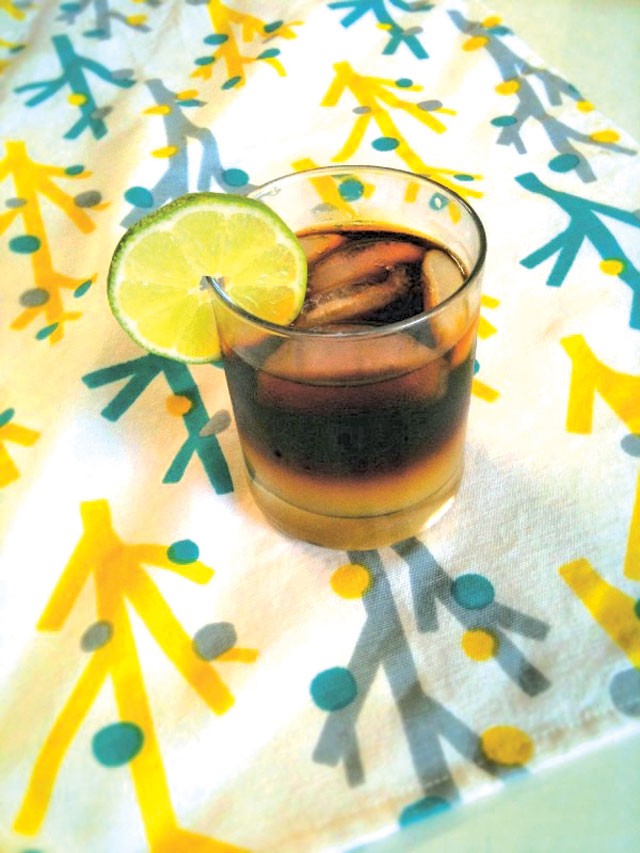 When I decided on the Dark & Stormy for this month's Remix, it looked like Hurricane Isaac (or Kirk or Leslie or somebody) was going to be giving us a beating, so the choice seemed apt. But now it looks like we're in for nothing more than our usual hot sunny days spiked with afternoon showers, so my Remixed version turns out to be even more suitable than I'd expected.

The Dark & Stormy – a basic mix of Gosling's dark rum and ginger beer, garnished with lime – is a superlative warm-weather drink, and simple to build: Even if the power's out, you can still mix one up (though you may miss the ice). My Remix, the Sun & Storm, is a little lighter, a little more citrusy and has a spicy kick; but if you make the ginger syrup beforehand and store it in the fridge, it too, will be easy enough to throw together if a hurricane finally does come and smack us all around.

About the rum: Gosling's has a very distinctive taste (pitch-black and almost smoky) that drinkers either love or hate – no in-between. I recommend giving the original cocktail a try. The Cruzan Black Strap rum I use in the Remix is made from blackstrap molasses and has a sweet, thick flavor reminiscent of tamarind when mixed with lime juice. Highly recommended in any preparation, even just with fizzy water.

Into a tall glass filled with ice, pour 4 or 5 ounces of Gosling's Stormy Ginger Beer and top with Gosling's Black Seal Rum. Garnish with a lime wedge (optional).

Note: Invented in Bermuda just after World War I, the Dark & Stormy is patented by the Gosling's company, who claim that a similar cocktail made with any other ingredients is not a Dark & Stormy, and is an invitation to a trademark lawsuit. Far be it from me to recommend mixing one with the dark rum and ginger ale of your own choice.

Pour lime juice, ginger syrup and seltzer into an ice-filled rocks glass and give it a good stir. When everything settles down, pour rum in slowly (it will sit on top of the other ingredients). Garnish with a paper-thin lime wheel.

Mix sugar, ginger and water and bring to a boil, then simmer for two or three minutes until syrup thickens slightly. Pour into a Pyrex measuring cup over roughly chopped shiso leaves and red pepper flakes; let steep overnight, then strain the syrup into a clean container. (Alternate uses: Make your own ginger ale by mixing with seltzer, or pour over coconut sorbet.)