A fresh take on a classic American cocktail: the French 75 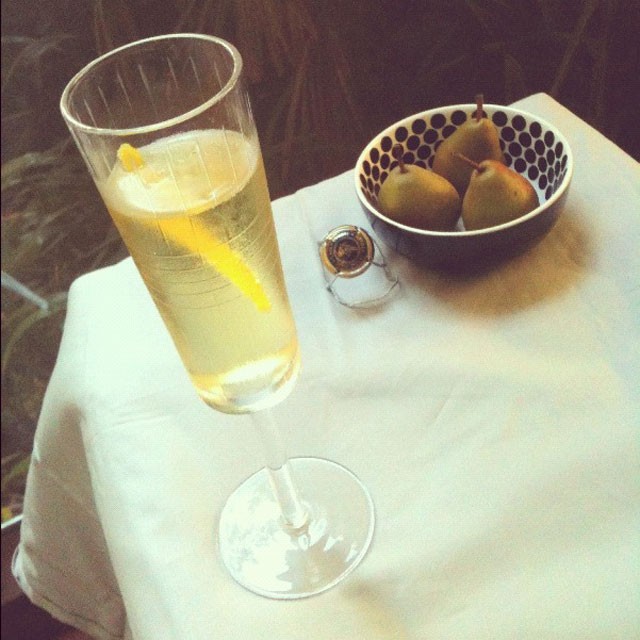 This 1915 cocktail is a deceptively innocuous-looking mixture of champagne, brandy or gin, lemon juice, and sugar. The pale bubbly glamour of champagne should not fool you into thinking that this is a girly drink; it was named after the French Soixante-Quinze field gun for the simple reason that it hits as hard as a 75mm shell.

I wanted to Remix the French 75 into something more multifaceted, while retaining its wallop (and refined appearance). After some research, I discovered that the first published recipe for the French 75 called for Calvados, not simply brandy (the use of gin was a later wrinkle, born of the Jazz Age fascination with that spirit, though it stuck) and that was my inspiration. The complexity of fruit brandies – by turns smoky, earthy, tart and dazzling – was exactly what the cocktail needed to be more than just a fizzy killer. I chose pear brandy instead of apple, though; to my palate, it holds its own better against the wine. Ginger syrup is warmer and mellower than the original's straight punch of sugar, and St. Germain elderflower liqueur adds a honeyed sweetness, along with notes of pear, peach and flower blossom. This Remixed French 75 reminds me of that first bite into a tart Granny Smith: the crisp snap and then the thin, clear, sharp juiciness.

A note about ingredients: Pear brandy is not the same thing as pear liqueur (see Remix recipe note), and there's no reason to buy expensive champagne when you're mixing it into a cocktail. Just get the driest cava, prosecco or champagne you can find – don't buy it unless it says "brut" on the label.

Pour the gin or brandy, lemon juice and sugar into a mixing glass with some ice, and stir until the mixture is chilled. Strain into a champagne glass (flute or coupe) and top with champagne. Garnish with a twist of lemon peel.

First, the ginger syrup: combine a half-cup of water and a half-cup of sugar in a small saucepan and bring it to a boil; drop in about 2 inches of peeled ginger cut into chunks and lower to a simmer. Stir until the sugar is dissolved (two minutes or so), then set aside to cool. Pour through a strainer into a jar and store it in the fridge so you don't have to keep making it every time you want a cocktail.

Pour pear brandy, St. Germain and ginger syrup into a shaker half-filled with ice. Shake quickly to combine, then strain into a champagne glass (flute or coupe). Top with sparkling wine and garnish with a lemon peel twist or a slice of Seckel pear.

Note: Be sure to use pear brandy, which will be shelved with the cognacs, brandies, Calvados and eaux-de-vie – not pear liqueur (like Marie Brizard), which a certain liquor store chain confusingly shelves under the sign "fruit brandies." If you see sour apple schnapps or crème de banana, you're in the wrong place.