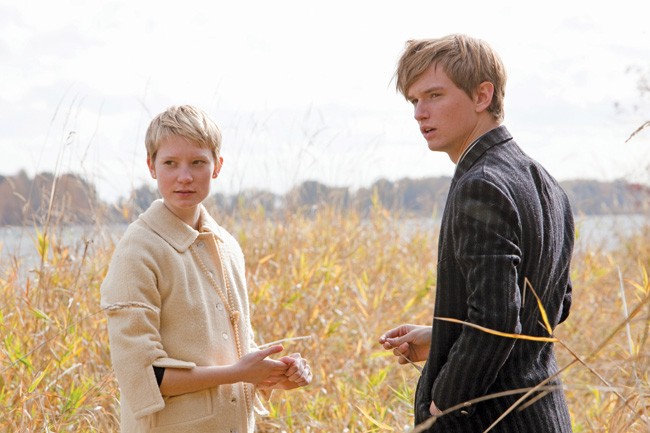 As if deliberately meeting the challenge of its inherently silly plot – morose loner (newcomer Henry Hopper, son of Dennis) who likes to attend funerals and converse with his imaginary World War II kamikaze pilot ghost friend meets quirky, terminally ill girl (The Kids Are All Right’s Mia Wasikowska) – director Gus Van Sant’s Restless is just as relentlessly whimsical and calculated as it sounds. The big surprise, however, is just how dreadfully acted, written and, yes, directed this clunker truly is.

Hopper plays Enoch, a graveyard-wandering orphan whose parents were killed in a car crash that also nearly took him – he died for a few minutes, after which he began seeing Hiroshi (Ryo Kase), a calm, approving specter as mundane and half-alert as Enoch. When the kid is nearly outed as a tourist at a stranger’s funeral, he’s saved by Wasikowska’s carefree Annabel Cotton, and a budding romance (and obvious Harold and Maude tip of the hat) is born.

We also meet the pair’s respective caretakers in the form of the transcendent Schuyler Fisk as Annabel’s older sister (their mother is often too drunk to manage the hospital trips) and a wasted Jane Adams as Enoch’s put-upon aunt.

Enoch and Annabel bond over the works of Darwin – that little conceit is used solely as a device for eye-rolling bird metaphors – as well as a shared propensity to chat with grave- stones and not much else. First-time screenwriter Jason Lew doesn’t draw these attractive, tragedy-afflicted teenagers as weathered souls whose outsider status, though burdensome at, say, Halloween parties, nevertheless imbues them with perspective, appreciation and, at the very least, interesting dispatches from the cancer ward underground. Instead, Enoch and Annabel’s relationship is pregnant with (carefully scripted) pauses and juvenile death-scene role-play, which cynically serves to wink knowingly at the film’s melodramatic impulses.

Once the pair share their first kiss, the movie goes on auto-pilot, idly running out Annabel’s overtly stated clock. Enoch loses himself in anger, Annabel reads and sorts candy by phylum (how cute) and a sappy side note concerning Hiroshi’s lost love is thrown in for sentimental measure. Otherwise, Restless, throughout its third act, seems to wonder why anyone in the audience is still around. It’s an attention deficit that has always stained the worst Van Sant outings – Last Days and the much stronger Gerry come to mind – but the director’s self-flagellating inclination to cast plucked-from-school non-actors tends to soften the impact. Here, Van Sant has one of today’s best young stars, Wasikowska, a pedigreed newcomer in Hopper and a heralded Japanese veteran in Kase, and yet there isn’t one electrically charged frame in Restless. There’s not one scene that pops off the screen.

One of them comes close, however: Annabel takes Enoch to the cancer ward to show him around, and then ups the ante with a trip to the morgue. There, a teen girl’s lifeless body is wheeled in, at which point a nurse calls security on them. A potentially tense situation is diffused when the guard recognizes Annabel, who stands by passively wearing a blank, faintly friendly expression. At that exact moment, if any of the four breathing people in that room did or said the wrong thing, it would propel our characters into an eventful, ethically loaded scenario. But nothing happens; just a warning and a smile. Annabel is even granted a close-up view of the body.

Some might call this anti-action brave or poetic; I believe it’s a choice as wooden and castrated as everything else in the movie. In the end, its title might refer not to Annabel’s lust for life, or even to the state of being its audience is driven to, but to the somersaults Harold and Maude director Hal Ashby is surely doing in his grave right now.