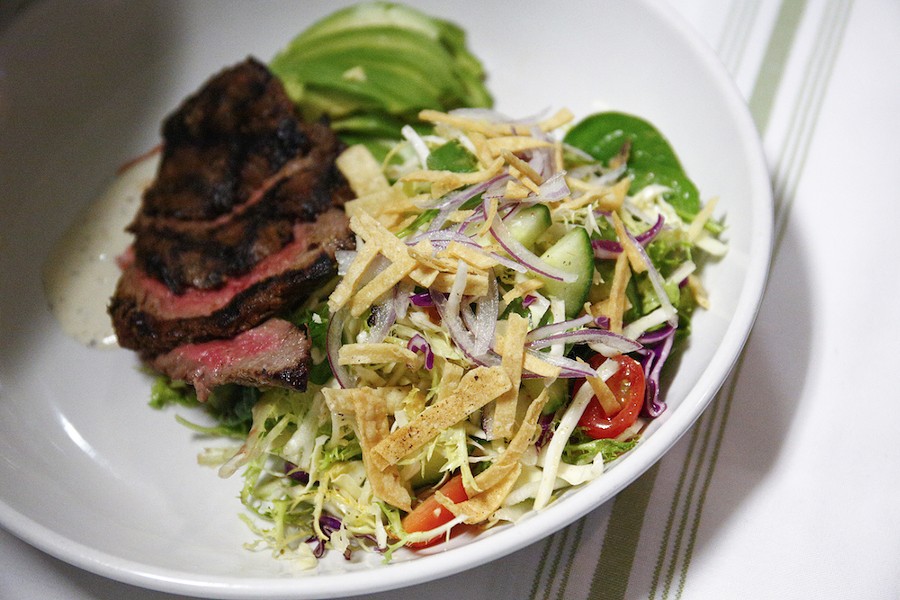 Our love affair with Mexican cuisine, however authentic or diluted or gut-wrenching, is a testament to its egalitarian essence. It caters to all gastronomic tastes and preferences – so much so that UNESCO put the cuisine on its list of "Intangible Cultural Heritage of Humanity" in 2010. And it's cheap to produce and consume. Even with the growing trend towards méjor Mexicano, the cuisine wreaks minimal financial damage, which suits Jason and Sue Chin just fine.

The Chins, the savvy pareja behind Seito Sushi and Osprey Tavern, swerve a bit out of their comfort zone with Reyes Mezcaleria and its "regionally inspired Mexican cuisine." But damn if the space isn't a stunner. Sue's design approach appears to mirror the kitchen's – regionally inspired – with an impressively festive and folksy pastiche of elements you'll eye longingly, just as you will the carefully constructed dishes.

Jason had wanted to open a Mexican restaurant for a while, but wanted one that would challenge the perceptions Orlandoans had of Mexican food and drink. Thus the extensive offerings of mezcal and tequila at Reyes; the fried grasshoppers (chapulines) tossed in a seasoned mix of tamarind, chilies and spices; the painstaking search for fresh hoja santa (the Mexican pepperleaf) for a proper mole amarillo.

That mole amarillo will soon find its way onto Reyes' tables, but you should nevertheless indulge in the menu's dark, rich mole negro served with supple slices of pan-seared duck breast ($22). It's outstanding, but most everything here is. Whatever inconsistencies we experienced soon after Reyes first opened have been negated.

The tamales ($8) are now dependably moist and never just a yellow log of blecch. Carnitas stuffed inside the tamales are deeply flavorful, even without the use of lard in the cooking process. You'll find that slow-cooked pork shoulder plopped atop yuca llenados ($6) as well. The fried wedges – crisp on the outside, soft on the inside – are available as a happy hour item daily from 5-7 p.m. We never fail to order some crackling tostadas, be they layered with slivers of yellowfin tuna ($9), pickled tomatillo, avocado, lime aioli and fried shallots, or braised short rib ($8), refried beans, queso fresco, crema and San Luis hot sauce (made from cascabel puya peppers).

From the list of platos fuertes (mains), we've heartily scarfed the chile relleno ($14), a roasted and cerveza-battered poblano stuffed with beans, queso Oaxaca and grilled corn. It's served in a deep dish with tomatoey Veracruz sauce and rice. Apart from possibly wanting more red-chile sauce, you'll find no fault with the enchiladas ($18) filled with short rib and roasted pumpkin. The 8-ounce USDA Prime cut of flank steak in the carne asada ($25) was tender enough, but the beef lacked flavor. Mexican chimichurri, esquites, roasted tomato and jalapeno lent some peripherally, but I'd get the carne asada tacos ($12) instead. While you're at it, get the tacos of wild Argentine shrimp ($12). They'll likely fall apart on you, so ask them to double-tortilla your order.

You won't find any surprise endings, though the Mexican trinity of sweets offered – churros, flan and tres leches ($6) – are all worthy. They, along with everything else we sampled, are a culmination of Jason's longstanding desire to bring the true flavors of south-of-the-border cuisine to Orlando. Consider Reyes a Mexican conquest of the Chin Empire.