River City Extension's present sound takes a swim in the past 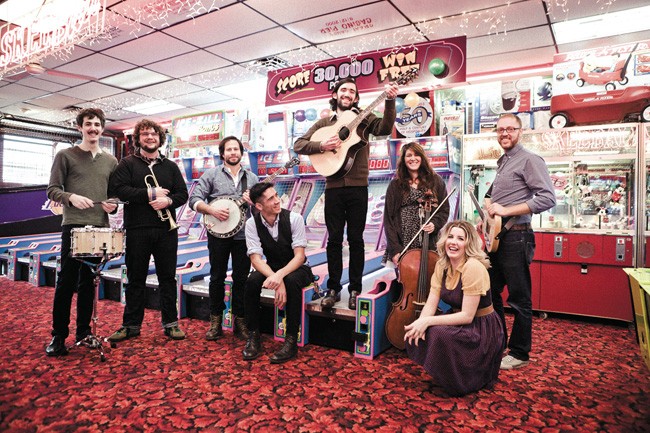 Last summer, when Joe Michelini worked at a liquor store in his hometown of Toms River, N.J., his attention was occupied by more than just his job. The shop piped in satellite radio, always set on a '50s station. Every now and then, Michelini would sneak behind the counter, check out what was playing and copy down a song's details if he had heard something he liked. While circumstances meant that he wasn't able to do this all that often, working in the liquor store allowed him to gain a greater appreciation for a school of sound he was already into.

“You were allowed to do different things that you're not really allowed to do now,” Michelini says, emphasizing that his appreciation developed on a song-by-song basis. “If you really had to say something, there's all of those slow heartbreak songs where there's an interlude, the music breaks down and the singer stops singing and talks to their muse or even their listener for a minute – that whole, ‘I'm sorry that I broke your heart ...' I really love that. There was something so sweet about it, and the rest of it just seemed [like] dance music.” Michelini has long held affection for pre-1960s pop, jazz and blues. His time at the liquor store introduced him to Eydie Gormé's “Blame It on the Bossa Nova” (1963) and Mickey & Sylvia's “Love Is Strange” (1956).

Shades of '50s pop shine through on Don't Let the Sun Go Down on Your Anger, the new record from Michelini's solo-project-turned-eight-piece River City Extension. He calls “Welcome to Pittsburgh” “a very obvious nod to that type of music – the real simple drums and the string arrangements and the kind of croony vocals,” while “Vanessa's Song” has “that sad ballad-y feel to it.”

“There's definitely parts of the record that you listen to and be like, ‘Yeah, that sounds like a nostalgic move,'” he says.

These developments make perfect contextual sense for River City Extension. In the past, Michelini has half-jokingly called his group “chamber punk,” referring to their combination of orchestral chamber-pop elements (the band has employed horns, woodwinds and strings) and DIY punk vibe. (When the moment calls for it, River City will break out the sweaty, healthy aggression.) Michelini, who was almost finished writing Don't by the time he started working at the liquor store, foresees his band making more “antique pop,” but he also mentions tinkering with electronic music, guitar effects, vocal layering and a cappella vocals in the future. This mélange of elements has little cohesion on paper, but Michelini isn't much for rules anyway.

“I don't think that we ever set out to have a goal for a sound,” he says. “I actually have almost no interest in that, you know? Our goal is just to communicate effectively with our listeners, whatever emotion that we're trying to communicate, and we would use any sound necessary to get there.”