FLORIDA ELECTROACOUSTIC MUSIC FESTIVAL Sadly, for many people in Central Florida, electronic music comes down to a "breaks vs. trance" dichotomy. Those people would likely not be interested in the goings-on at the 14th Annual Florida Electroacoustic Music Festival, as this event is rooted in the theory-rich academia that is electronic avant-garde music. Interest in this type of music has ebbed and flowed over the years, and it was probably at its most "popular" during the prog/noise heyday of the late '60s and early '70s. But since 1991 (certainly an ebb point), the University of Florida has been bringing some of the most forward-looking composers and musicians to their annual juried festival. This year, the composer-in-residence is none other than Morton Subotnick. Subotnick has long been a highly respected name in electronic music; his 1967 piece Silver Apples of the Moon helped shape the notion that recorded works could be treated as 20th-century chamber music, rather than just a transcription of a live performance. In addition to Subotnick, composers and performers from the United States, Europe and Japan, as well as numerous lectures, will round out the events at the three-day festival this year; who knows, among those performances you may well hear the "Einstein on the Beach" or "In C" of our generation. (through April 9 at the University of Florida Center for the Performing Arts Black Box Theater; full schedule available at http://emu.music.ufl.edu/femf/; free) 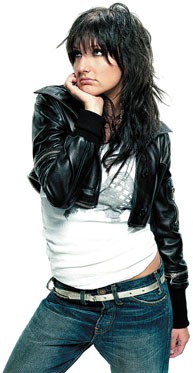 ASHLEE SIMPSON Like most discerning music fans, we giggled knowingly when Ashlee Simpson cued the wrong track on Saturday Night Live and started shuffling like a saggy-stringed marionette. However, we couldn't help but be charmed while watching Simpson's boo-baiting caterwauling during the Orange Bowl halftime show in early January. Like a safety pin through an earlobe, Simpson's naked screech possesses a certain freakish beauty; she's clearly a punk princess in progress. Simpson seems aware of her destiny: At a March 7 show we saw in Kansas City, she covered Hole's "Celebrity Skin," nailing Courtney Love's cracked delivery. She also remade the Pretenders' "Brass in Pocket," belting out "I'm special, so special" as if she were part Brody Dalle, part Stuart Smalley. True, she dialed the wrong pitch on Blondie's "Call Me" and went down in flames while attempting Madonna's "Burning Up," but those tunes aren't essential to her new identity. Simpson lacks the prickly personality that aggressively inaccessible singers often use as a defense mechanism. When the Orange Bowl crowd jeered her performance, she seemed genuinely crestfallen. "I've learned not to care what people think unless it's a fan of mine," she told us during a post-show phone interview. "People can be nice to you one day, and really rude the next. I just let things brush off my shoulder." After a few more spurnings, though, Simpson will develop a chip on that freshly swept shoulder and then be on her way to snarling and sneering her way to alt-rock iconhood. And we'll be waiting. (with Pepper's Ghost, The Click Five; 7 p.m. at House of Blues; 407-934-2583; SOLD OUT)

TSOL There was a time when we would've shit our pants to see a TSOL concert. Beneath the Shadows and Dance With Me were albums we listened to repeatedly, poring over each liner note, run-out groove, flier and photograph. But now, with more early-'80s punk bands reuniting than we can remember listening to in the early '80s, you'll have to excuse us if we're unmoved at the prospect of yet another group looking to cash in. In all fairness, we'll admit a smidge of guilt for our lack of enthusiasm for punk rock Mach II bands like Social Distortion or The Vandals – because, overall, they've at least stayed true to their (tired) sound. However, TSOL deserves special derision, because we endured their descent into hair-metal mediocrity and actually bought Revenge and Hit and Run, hoping for some remnant of the earlier incarnation. The four songs we could sit through off TSOL's latest, Divided We Stand, showed a band lacking any shred of originality or inventiveness. We'd have more respect for them if they revisited the cock-rockin' Strange Love years. (8 p.m. at Will's Pub; 407-898-5070; $12)

ROBBERS ON HIGH STREET There are two ways for a contemporary indie-rock band to utilize piano. There's the drippy, elegant way that a band like Monarch uses it to accentuate their cloudy grandiosity; you know, that sort of sub-melodic Ben Folds-meets-Coldplay thing. Then there's the right way: back arched, toes curled, sweat dripping and bang-bang-banging; it's three big fat fucking chords hitting you upside the head because they're being played just like they were on a guitar. This is how Spoon made pianos cool again, and this is the way that Ben Trokan from Robbers on High Street likes to play piano. To be clear, ROHS is a guitar band, it's just that they're a guitar band with a heightened sense of melody and an incredible knack for crafting pop compositions that stick with you long past their expiration date and, more importantly, without being cloying or simple. In other words, we freakin' love 'em. This show (some sort of weird corporate collusion between Virgin and, um, Dentyne) was good enough when it was the always-dependable Cake and the always-awesome-even-though-nobody-else-likes-'em Gomez, but with Robbers on the bill, it's a must-see. (with Cake, Gomez; 7 p.m. at House of Blues; 407-934-2583; $29.50-$65)

DEMON'S CLAWS Montreal's Demon's Claws embrace a raucous Dwarves-by-way-of-the-Stones sound that's rampant with raw energy and soaked in sleaze. On their self-titled debut, the quartet has combined the raunchy delivery of a roadhouse revival with a ballsy, garage-punk swagger to create a precarious and edgy album that may not be breaking any new musical ground, but is a clusterfuck of fun nonetheless. If you need a local reference for a sonic comparison, imagine Orlando's own habitually defunct Studdogs or even openers The Hex Tremors bashing out the blues on a gutful of Everclear and a mouthful of pills. Not that this scenario won't play out at the show anyway. (with Skip Jensen & His Shakin' Feet, The Hex Tremors; 10 p.m. at Copper Rocket; 407-645-0069; $5)

SHORT FILM SLAM A lot can happen to a movie in the postproduction stage. Just look at the locally shot feature film The Informercial, which found itself miraculously retitled The Sellout – and whittled down to a 20-minute short in the process. Why the brutal editing job? It was a "creative decision," say filmmaking partners Jerry Eisinger and Kevin Townsley. (Yeah, yeah, fellas; so was casting Melanie Griffith in The Bonfire of the Vanities, and look how that turned out.) Still, we like The Sellout's chances as a contestant in DMAC's latest Short Film Slam, and not just because of one segment that did survive the cutting room: an onscreen visit to the offices of "the Weekly," represented on film by the conspicuously swanky headquarters of law firm Morgan & Morgan and presided over by A&E editor "Steve" – a cinematic construct who's hilariously taller and swarthier than the real thing. Ah, flattery. (5 p.m. at DMAC; 407-992-1200; $5, $3 for members)

FIESTA MEDINA As far as English-language promotion goes, there's little to none for Orlando's biggest Latin American heritage festival, which fills Festival Park every year in April. Nonetheless, this year's crowd is expected to swell to 12,000 revelers or more. After 17 years, the family-friendly formula is tried and true for longtime organizers Rene's Productions: Latin foods, drinks, music, arts and crafts served in good-time proportions and backed by big-dollar sponsors, all baked under the sun. This is a loud, colorful, overindulge-yourself affair, authenticated by Latin pop stars La India, Cano Estremera, Frankie Negron and Fulanito, and fleshed out by the local Latin community. It's about as close to Miami as you can feel in Orlando. Even if you don't speak Spanish, just bring cash and be ready to point. (11 a.m.-8 p.m. at Orlando Festival Park; 407-381-5310; $10)

NANCY JAY OPENING Yet another influential art educator on the creative Valencia/Crealdé axis, Nancy Jay becomes the center of attention at COMMA Gallery with her exhibit, Rewriting the Landscape, which travels to Orlando from the John Marlor Gallery in Milledgeville, Ga. Jay retired several years ago from Valencia Community College after 30 years of mentoring students (who frequently credit her inspiration, if you check around the Internet). She then returned for several years to her native Georgia, generating these paintings based on "memories of childhood combined with her renewed connection to her familiar terrain … presented in surfaces of opaque and transparent paints seeped into unprimed canvas," writes curator Karen Carasik. But as of January, Jay was permanently back in town interacting with students in a new position – director of painting and drawing at Crealdé School of Art. So for this welcome-me-and-my-art-home party, Jay has invited acoustic guitarist Bill Schwartz (who studied with Jorma Kaukonen of Hot Tuna at the Fur Peace Ranch Guitar Camp). Students – past, present and future – should come pay homage. (6:30 p.m.-9 p.m. at COMMA Gallery; 407-376-1400; free)