‘Rosewater’ is cursed by its cliché tendencies 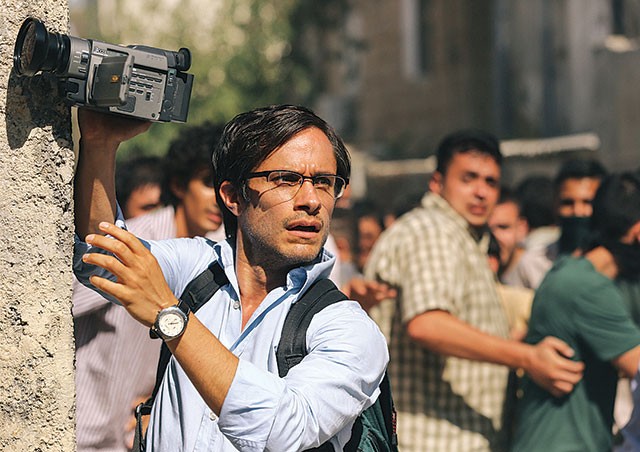 Honestly, I had hoped for more. I know that comedy talk show host Jon Stewart is a first-time filmmaker. To expect him to write and direct an intellectually, politically and thematically provocative movie right out of the gate is unfair. But much as Stewart lobbed softball questions at Donald Rumsfeld and torture memo apologist John Yoo on The Daily Show, Rosewater similarly comes up short in ambition. I am more disappointed by what might have been than what is.

Stewart is uniquely qualified to understand the important role journalists play in society. After all, they make up a substantial portion of his guests on The Daily Show, providing fact-based rebuttals to the political absurdities the show satirizes. Time and again, Stewart has shown both appreciation and respect for the fourth estate’s mission to speak truth to power.

The hostility that journalists face from oppressive foreign regimes, and even interests here at home, can be disturbing. That the American public thinks so little of their efforts (journalists frequently make the list of top 10 most despised occupations) only underscores the need for passionate advocates like Stewart.

In choosing to tell the story of reporter Maziar Bahari’s incarceration by Mahmoud Ahmadinejad’s regime, Stewart had a unique and informed opportunity to go beyond the expected triumph-through-perseverance narrative and open up a conversation about the role of fact-based reportage in the world today. Unfortunately, despite Rosewater’s earnest and intelligent approach, it remains a shallow treatment of a topic that deserves much more.

In 2009, London-based Bahari (played by Mexican actor Gael García Bernal) went to Iran to cover its presidential elections for Newsweek, leaving behind his pregnant wife. When charges of election fraud emerged and young protesters hit the street, Bahari decided to stay and cover the tumult that followed. Within days he was arrested by Iranian authorities and accused of being a spy for the U.S. government. Their evidence? His appearance on The Daily Show. Bahari was put into solitary confinement, and over the course of 118 days, he was brutally interrogated by a thuggish yet all-too-human jailer (Danish actor Kim Bodnia), testing both his will and sanity.

It’s no surprise that Stewart approaches his story with modesty and patience, having the good sense to recruit an experienced cinematographer and editor to assist him in capturing the insular, paranoid and claustrophobic world of Bahari’s incarceration. His movie keeps us engaged despite the repetition of its confrontations, and Stewart proves that he has a good ear for dialogue and a good nose for the absurd. In fact, Rosewater’s best moments come when Bahari recognizes how literal and silly his captors’ obsessions are, and then uses ironic resistance as a way to thwart their goals.

Casting Bernal was an equally savvy choice. He’s a charismatic actor who ably conveys Bahari’s fear, dignity and humor while never overshadowing the role with celebrity. Though some have criticized Stewart for hiring non-Middle Easterners in the two key roles (as well as his choice to have the actors speak in vaguely accented English), his desire to make the story accessible to American audiences is a reasonable defense, especially given our country’s shocking ignorance about a sworn enemy. Rosewater is laudably heartfelt in the way it asks us to empathize with not only Bahari’s situation but also the confined humanity of his jailers.

Unfortunately, Rosewater suffers from more than a few missteps along the way. The projection of Bahari’s memories on shop windows reeks of film-school pretense and the reliance on imaginary conversations between jailed Bahari and his dead father are as unrevealing as they are clichéd. Also, can we please declare a moratorium on animated representations of tweets and emails?

But it’s Stewart’s CliffNotes treatment of culture and context that disappoints. Not only does the growing threat to independent journalism go unexamined, Stewart fails to connect Iran’s behavior with our own. It isn’t hard to recognize that Bahari’s incarceration and enhanced interrogation echo the situation in Guantanamo Bay, and that Ahmadinejad’s criminalization of reporters and protesters has its equivalencies here. One has only to recall the actions by police in Ferguson, Missouri, to see the connections. Rosewater, however, remains mum on the comparisons, devoid of subtext or metaphor.

That Bahari’s tale ends with his release is no surprise. But Stewart shows us how soon after another man takes his place. On the cell wall, Bahari has left a message. It reads: “You are not alone.” Undoubtedly, the gesture is meant to let audiences leave with a sense of hope. But the truth is, we have no idea who the man is. And we never will. Without the benefit of a high-profile media position and appearances on The Daily Show to bring his story to light, his anonymity will most likely remain intact. It is his fate and the people who follow that Rosewater should prompt us to worry about.